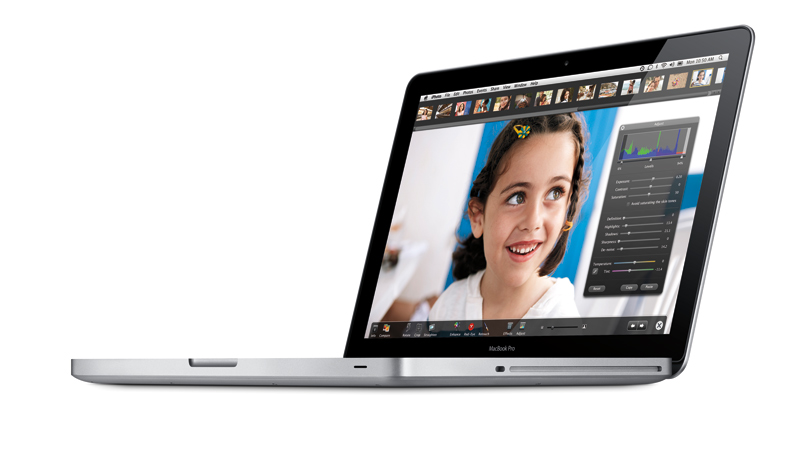 The non-Retina MacBook Pro has a lot going for it. It’s powerful enough for most general users, it looks gorgeous with its unibody form factor and design, it’s upgradeable, and it’s the one remaining Mac with an optical drive. However, what the Retina MacBook Pro can offer for just £100 more (a significantly improved display, a slimmer, lighter design, flash storage, Thunderbolt 2, better battery life and more), it’s difficult to fight the non-Retina MacBook Pro’s corner. If you’re looking for a 15in screen, you can write off the non-Retina MacBook Pro immediately, and for better internal specs than the low-end model you’ll need to cough up for a built-to-order model or opt for the Retina line. If you can live without the DVD drive and spinning hard disk, shelling out £100 for a machine with a better screen, and a lighter, thinner case, is essentially a no-brainer.

Not only is it the only MacBook Pro left without Apple’s high-resolution Retina display, but the non-Retina MacBook Pro is the only Mac in Apple’s entire current Mac line-up that sports an optical disc drive. As of October 2016, Apple doesn’t actually sell it anymore. Those who want to pop a disk into any of Apple’s other Macs will need to have an external optical disk drive such as Apple’s own Superdrive in order to do so. Read our Apple SuperDrive review

Prior to the arrival of the Retina MacBook Pro models, Apple had developed three laptop models for three distinct sets of buyers: The MacBook was a consumer model for general users; the MacBook Pro catered to a higher-end crowd of creative professionals; and the MacBook Air was there for a smaller group for whom portability outpaced all other traditional notebook appurtenances like an optical drive, spinning hard disk and multiple connection choices. This crowd appreciated the MacBook Air’s friendly specs for traveling light.

With the introduction of the Retina MacBook Pro, Apple re-created its consumer laptop category – or rather restored the one that it had removed with the demise of the mid-market MacBook in 2011. Now, it’s the Retina display model that caters to the creative crowd, but with just £100 difference between the low-end Retina model and the non-Retina MacBook Pro, it’s also attractive to the consumer mid-market. The MacBook Air still caters for the group that values a combination of portability and increasingly speedy performance. So where does that leave the non-Retina MacBook Pro? We explore that question later in this review.

The non-Retina MacBook Pro has a 2.5GHz dual-core Intel Core i5 processor with Turbo Boost up to 3.1GHz, as well as 4GB of memory, 500GB storage space on the hard drive and Intel HD Graphics 4000. Apple says the built-in battery will last up to seven hours too, though our test results suggest otherwise, as you’ll see later in this review. Crucially the non-Retina model also has a DVD/CD drive, which makes it a popular choice for many.

Those specs compare closely with the 13in Retina MacBook Pro models, though the Retina versions sport PCIe-based flash storage rather than a hard drive. They also have Intel Iris Graphics and the option of 8GB memory.

Additionally, Apple offers the option to modify the non-Retina MacBook Pro when you order it, so you can boost the specs up to a 2.9GHz dual-core Intel core i7 processor, 8GB RAM, or add a 1TB 5400-rpm hard drive.

Unlike the Retina models – where everything is fixed into place, and where you must make decisions on what you’ll need down the road at point of purchase – the regular MacBook pro can be customised with do-it-yourself parts. You can easily replace the hard drive and RAM at any point. 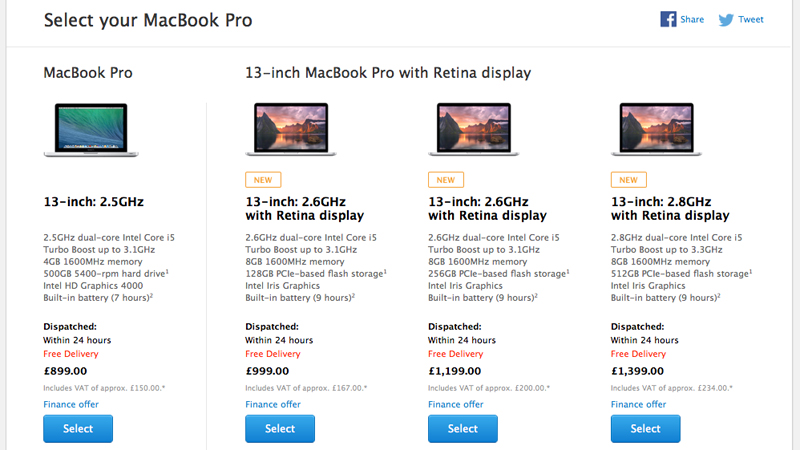 As it’s one of the biggest decision-making factors when considering whether to buy the non-Retina MacBook Pro, we’ll start by taking a closer look at the display.

It’s still not a bad display, by any means, though.

Plus, the MacBook Pro also supports dual display and video mirroring with full resolution on the laptop screen and up to 2,560 by 1,600 pixels on the second monitor. While much as been made of the extreme viewing angle of the Retina model – and all the accolades are true – we were nonetheless impressed by the wide viewing angle of regular MacBook Pros as well. Moving to either side of a high-resolution image or a video, we noticed very little colour or composition distortion – even in extreme sideways viewing positions.

And for the record, though colours were deeper and richer, and detail in both text and images approached the quality of printed matter on the Retina display, users of traditional MacBook Pros will note that its screens are still extremely colorful, vibrant, and pleasing.

While some users are bothered by glare and reflections bouncing off of the MacBook Pros’ glossy screen, we generally have no problem with it, preferring the vibrant colours and deep blacks. However, for those who seek more muted visuals for work or aesthetic reasons, the MacBook Pro Retina displays, with their pixel-doubling technology, have a lot less reflectivity than their siblings, and as a result, images, movies and text, seem almost page-like in their realism. 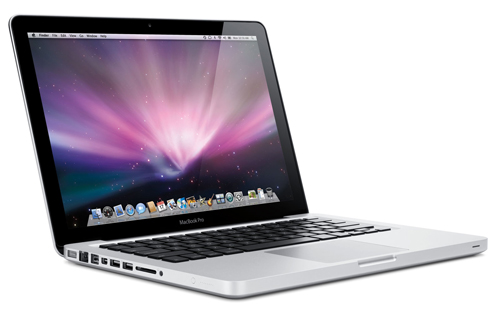 Apple’s non-Retina MacBook Pro weighs 2.06kg, which is substantially heavier than the 13in Retina Models, which weigh in at 1.57kg.

However, we’ve carried our non-Retina MacBook Pro around in our backpack, which it fits into nicely thanks to its solidly packed, 12.78 by 8.94in aluminium build, and were not especially bothered by its weight.

We did notice, though, that when using the non-Retina MacBook Pro in comparison to, say, the MacBook Air, it helps to be thick-wristed. We had to make adjustments in our typing position to accommodate both the thickness and the squared-off edge of the case. The wedge form factor of the MacBook Airs ease the pressure on the wrist, and that’s nearly as important a comfort issue as weight, screen resolution, noise and heat.

Nonetheless, the non-Retina MacBook Pro felt sturdy and well-balanced as we walked with them open – everyone does that from time to time to avoid putting the computer to sleep when switching rooms or going to a colleague’s desk or a meeting.

Compared with its immediate predecessor, the MacBook Pro non-Retina line shows a modest uptick in performance. It features a 2.5GHz dual core Intel Core i5 processor with Turbo Boost up to 3.1GHz and 3MB of L3 cache. Intel’s Turbo Boost technology lets the processor run higher than its base frequency because it dynamically controls the CPU’s clock speed. Turbo Boost kicks into action automatically when Mac OS X requests the highest performance from the processor.

Hard drive space matches the previous generation at 500GB, but that’s more than the 128GB flash-storage space found in the low-end 13in non-Retina MacBook Pro. Configurable options include a 1TB 5400-rpm hard drive, or a solid-state drive at 128GB, 256GB or 512GB. Find out more about the difference between a hard drive and a solid-state drive here.

Our lab tests found that the MacBook Pro has a Speedmark 8 score 153, which makes it 20 per cent slower than the early-2013 13in Retina MacBook Pro with a 2.6GHz Core i5 processor, so that’s quite a significant speed difference, though that model will cost you £500 more than the non-Retina MacBook Pro.

The two low-end Retina Models have slightly more impressive processors than the non-Retina Model, and they are fourth-generation (Haswell). They both sport a 2.6GHz dual-core Intel Core i5 processor with Turbo Boost up to 3.1GHz, both with 8GB RAM.

Sadly, losing the 15in non-Retina MacBook Pro meant losing the speakers situated on either side of the keyboard. The 13in model lacks the topside grilles and thus sound from the speakers is flatter, tinnier and has less resonance and depth. If sound quality is a big part of your user experience, either in creating or listening to audio, be sure to take that into account, though you won’t find the topside grilles on the 13in Retina models either.

The other side of sound is noise. Apple appears to have mostly solved the noise problem for normal operations with non-Retina MacBook Pro. Even running a video with the DVD in the drive did not kick up the fans or significantly add to the noise level, though we did hear the drive running, faintly, when we put an ear very close to the machine. When we watched a movie from the hard drive, it was similarly quiet, and we never heard the fan.

As for the heat factor, we can say that despite a very small bit of warming, the bottom of the unit stayed cool and comfortable in the lap for a long time during regular use, and even when watching streaming video or video running via DVD in the drive. It heated up significantly however with Handbrake encoding. The bottom of the case, especially near where the lid opens and closes, tended to get too warm to keep on the lap during that operation.

The 13-inch MacBook Pro has a built-in 63.5-watt-hour lithium-polymer battery. Apple says battery life lasts about 7 hours on the non-Retina MacBook Pro models, based on its “wireless web test suite,” though Macworld’s lab tests are a little more rigorous. It topped five hours of continuous use, with more specific results of 5 hours and 47 minutes.

The Retina models will give you a much longer battery life. The entry-level 13in Retina MacBook Pro latest 10 hours and 51 minutes in our tests, while the high-end model lasted 10 hours and 11 minutes.