We really like the Elgato Game Capture HD. The device and software is simple (in a good way) and it does exactly what it sets out to do, enable you to record video from a game console or iOS device with the minimum hassle.

Elgato is well known for sproviding good Mac OS X-based video capture devices (and software) for many years. It’s latest product, the GameCapture HD is capable of capturing video directly from all HDMI devices, including the iPad, iPhone and iPod touch.

Ostensibly the device isn’t really designed directly for iOS devices like the iPad and iPhone, instead it’s geared and aimed at console gamers (Xbox and PS3, primarily) just as well for iOS

The idea is that it sits between the device and your HDMI television. Video passes through the device and a USB connection siphons it off to a connected computer (Mac or PC). The software sits and records the footage while you play along on television.

Gamers are particularly keen on this because they can play on while recording all footage of their session, then any particularly impressive gaming video moments can be shared with their friends on YouTube. Here’s an example of t he sort of thing gamers share.

Setting up the device is simple enough, and it comes with a spare HDMI cable so you don’t need to buy an extra one. There are no batteries or power required and you just plug-it-in and go. 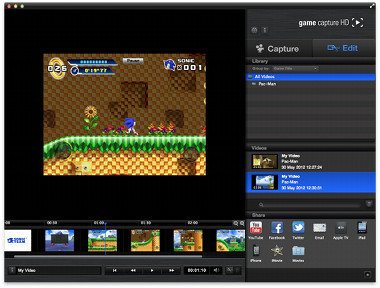 The software side of things is provided by the Elgato’s GameCapture HD program. With this you just click the record button and it quietly squirrels away capturing video in the background. You can also do basic edits (in an iMovie selection-style) where you pick the footage you want, and then either save it to disk or share it via email or YouTube (and then via Facebook, Twitter and so on). You can also export it direct to Apple TV, iPhone or ProRes (a lossless format used in professional broadcasting).

Where it gets interesting (to us at least) is its ability to also capture video from an iOS device. There are two ways to connect an iOS device to the GameCapture HD, and then to your Mac. The first is by using an Apple Digital AV Adaptor the second is by using connecting an Apple TV to the GameCapture HD and using AirPlay to send the video wirelessly from your iOS device, to the Apple TV, and then through to the Mac. 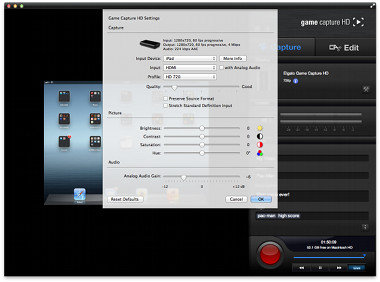 Elgato informed us that they found the quality slightly higher when using the Apple TV method, and we tested out both styles with the new iPad (third-generation) but seemed to get pretty high quality footage either way. Certainly enough to show off video on a service like YouTube (if you’re using ProRes you might want to investigate using an Apple TV). But we found using the Digital AV Adaptor more than up to the task, and it was also less likely to have interference from the network connection.

Editing video clips and sharing them via YouTube is mercifully simple. Click the Edit tab and you can drag the start and end of the clips to shorten them, and a Split button enables you to slice clips into shorter, more manageable segments. The only shame is we’d prefer it to have the drag-and-select type functionality found in iMovie, where you don’t have to splice up clips, but just drag a marquee selection around the area you want.

The editing features are fairly straightforward: you can’t add voiceover or additional audio to your clips. So you’ll need to head into a video-editing program like iMovie or Final Cut if you want to do something special. But that’s not really a problem because you’d probably want to use that sort of program for editing at any rate.

Sharing via social networking sites is simple enough, once you’ve entered your account details, the GameCapture HD software takes care of the rest. You can enter a title, description and tags into the software itself.

There are a few quirks, when you first connect the Apple Digital AV Adaptor we got a “This Accessory Is Not Supported” notification, but clicking OK makes it go away and it works just fine. And you should purchase the latest Digital AV Adaptor if you have a new iPad, as the old one doesn’t support the same output quality.