The limited amount of interactivity and repetitive nature of the game means that The Act won’t keep you engaged for long periods of time. However, the iOS version only costs 69p, and its finger-flicking action will probably work better in odd moments on an iPhone than on a Mac.

The Act is a bit of a throwback – in more ways than one. It’s a bit like a ‘50s slapstick comedy drawn in the style of a Loony Tunes cartoon. And rather than being a true game in which you control all your character’s actions, it’s more like an interactive storybook that only provides a limited amount of interaction as the story unfolds.

You play the part of Edgar, a window-cleaner who is washing the windows of a hospital along with his pal, Wally. Lazy old Wally decides to take a nap in a hospital bed but gets wheeled in to have a brain transplant instead. It’s then up to Edgar to dress up as a doctor – the ‘act’ of the title – and rescue Wally, whilst also trying to woo the lovely nurse Sylvia.

Much of the game simply involves sitting back and watching each scene unwind, but every now and then the action pauses so that you can take control of Edgar in order to get him out of a particular tricky spot.

Controlling Edgar is incredibly simple – and clearly designed for the touch-screen controls of an iPhone or iPod rather than the Mac. Using a trackpad or mouse, you just move to the left or right in order to make him react in different ways. One scene shows Edgar trying to chat up Sylvia, and moving right makes him behave more confidently, while moving left makes him more timid. If he comes on too strong he’ll scare Sylvia off, but if he’s too timid he’ll miss his chance. 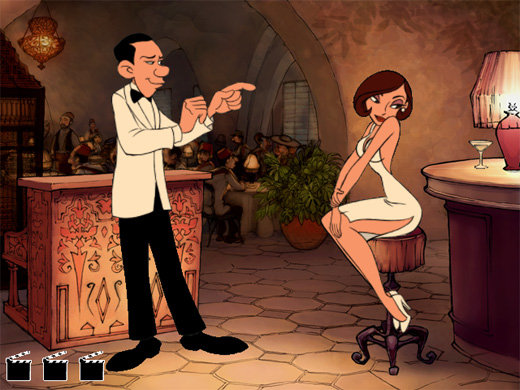 Control Edgar as he puts on an act to woo Sylvia

It’s a nice idea, and the cartoon animations have a lot of charm, but the game can be rather repetitive at times. Figuring out just how much left/right finger-wiggling is required is often a matter of trial and error, and even the most amusing scenes become a bit tired after you’ve watched them three or four times in a row.