What it does do is encourage customers into buying digital and real-world products from Amazon, hence the lower price. But many people are happy to shop at the Kindle store, and although Lovefilm is a shabby offering compared to Amazon Prime in the US, it’s still not a bad service overall. If the Kindle Fire has a half decent interface thanks to its new faster processor it’ll have a lot of happy customers.

Amazon has fired a shot at Apple’s with two new Kindle products: the Kindle Fire and Kindle Fire HD. This first-look review pits what we know of both Kindle products against Apple’s current iPad offering, along with how they will fare against a cheaper, smaller, iPad mini that Apple is rumoured to be announcing in October. 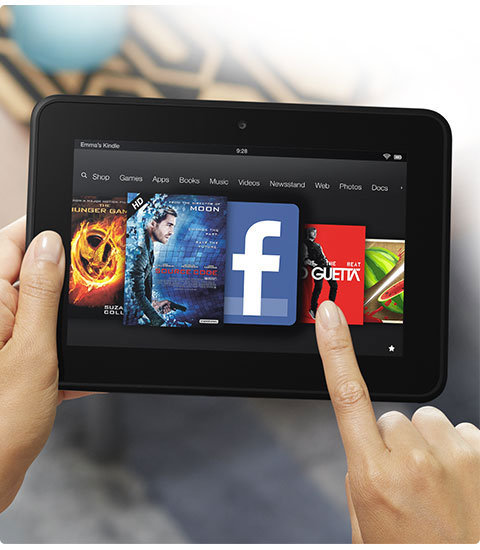 So in terms of price it’s clear that Amazon is being extremely aggressive here. Whether that translates into a quality experience is something that we will discover when the Kindle Fire and Kindle Fire launch in the UK on 26 October 2012 (Amazon is already taking pre-orders on its site).

We weren’t that enamoured with the performance of the original Kindle Fire, which we felt had a sluggish interface, which was fine for reading books and watching movies, but clumsy for anything you did inbetween.

The new Kindle Fire has a new 1.2GHz processor and 1GB of RAM which Android claims offers 40% faster performance than the original Kindle Fire. There may be something in this: Google’s Nexus 7 sports a 1.3GHz processor and the interface for that feels far smoother than earlier Android tablets, even though Android isn’t as slick as iOS, now that it’s not so sluggish it feels in the same ballpark. So it may be that Amazon has addressed a key fault with the original Kindle Fire.

Both the Kindle Fire and Kindle Fire HD sport 7-inch displays, rather than the 9.7-inch screen found on the current iPad range.

With a resolution of 1280 x 800 announced on the Kindle Fire HD the device offers 254 PPI (pixels per inch) putting it in the same category as the Retina display new iPad (and considerably better than the 132 PPI of the iPad 2). Of course, pixel density isn’t everything and we doubt the display on the Kindle Fire comes close to matching the IPS display that has always been standard on the iPad, but it’s certainly something to consider.

What’s really important about the Kindle Fire is the way that it is completely focussed on delivering content. Books and movies, mainly, but also music and Android games. This is obviously a double-edged sword as you buy into an Amazon ecosystem with a Kindle Fire, but as ecosystems go it’s not a bad. Kindle bookstore is great, Amazon owns Lovefilm, and Amazon’s general store hardly lacks popularity. Having all these services rolled into a device that’s sold at a reduced rate isn’t exactly a bad proposition.

On the other hand Amazon is, however, pushing you towards purchasing content from them. And that content isn’t quite as good in the UK as it is in the US. There is the none-too-small matter of Amazon Prime not being integrated in the UK. Amazon Prime in the UK gives you free next day delivery for £49 per year. In the US you also get unlimited free access to a lending scheme of 180,000 Kindle books and free streaming of 25,000 movies.

In the UK you get one-months free trial of Lovefilm (which Amazon owns). It strikes us as odd that Amazon hasn’t rolled the Lovefilm deal into Amazon Prime, and perhaps tried to sort out the book lending library (which must be possible in the UK). It just seems a lesser deal. Also Lovefilm in the UK is far less impressive than rival movie services in the US.

You also get access to Amazon’s Cloud Player which will enable you to store 250 songs for free (or import 250,000 tracks for a yearly cost, which hasn’t been announced in the UK but is $24.99 in the US). You also get unlimited cloud storage of any content you have purchased from Amazon.

And we don’t really know what Apps you’ll be able to install on the Kindle Fire. Even though the device is based upon Android, you can only install apps on it thorough the Amazon Android Appstore (which has its own Android app store). There’s no mention yet of any other Apps that might source content in the UK, such as BBC iPlayer. We imagine Amazon is going to restrict access to services that rival its own offerings, although time will tell (because the original Kindle Fire never launched in the UK we’ve not got a clear idea of what apps will be offered in this territory). You can, apparently, sideload Android apps by going into Settings and choosing “Allow install from unknown source” but we’d still like to know what’s available to the general public via the usual store.

It may well be that Amazon is skipping the UK (and Europe) for this launch as it did with the original Kindle Fire because it wants to focus on getting its products into US consumers hands. Or it may be that Amazon knows that it’s not really going to win this war on features, but price. And it needs to drive the price down as far as possible to reach its target audience. The model that probably sells well for Amazon will be the £129 option, maybe the £159 HD one.

But Amazon can play the price-war game more comfortably than either Apple or Google. More than any other company Amazon has tied up content with delivery; it pretty much owns the electronic book market globally. Amazon is on track to have 50% of the electronic book market by the end of the year, and it has revealed that Kindle editions are outselling its physical hardcover equivalents by a 3-to-1 margin.

“Last year there were more than two dozen Android tablets launched into the marketplace and nobody bought them,” Jeff Bezos, Amazon CEO said. “People don’t want gadgets anymore. They want services. Kindle Fire is a service. It greets you by name, it comes out of the box with your content preloaded, it makes recommendations for you.”

How the Amazon Fire is going to fare against the iPad, and to a lesser extent Google’s Nexus 7 is debatable. In terms of versatility it doesn’t come close to an iPad with the App Store, mind you at £129 for the Fire or £159 for the Fire HD it is a compelling alternative to those on a budget. That could change if Apple launches an iPad mini for around £200, which we hope would be a 7-inch iPad with hopefully a Retina display. That’d clearly be a better device, although we imagine Amazon will still sell a lot of Kindle Fires for £129.

It’s probably an easier device for people to understand and use than the Nexus 7, although it doesn’t have the same versatility. Having said that, we’re not sure if a 7-inch tablet needs the versatility of an iPad, maybe just delivering books, movies, TV shows, and basic web services (email, web browsing, Twitter, Facebook, and so on) is enough.