To be honest, we’re simply glad to see the nano get back on track after the somewhat baffling experiment with the 2010 model. It’s still a bit pricey, and we reckon Apple really needs a model that hits the £99.99 mark, but the larger screen and super-slimline design return the iPod nano to its glory days and leave most of its rivals looking like scrap metal.

Nobody likes a smart-alec, but I really am tempted to say – “I told you so”. The last version of the iPod nano launched back in 2010 was absolutely tiny, and consisted of little more than a 1.5-inch touch-sensitive screen with a belt-clip on the back. Unfortunately, the tiny touch controls didn’t really suit adult fingers, and the screen was so small that Apple didn’t even bother to include an option for playing video.

So it’s no surprise that this latest version of the iPod nano reverts to a more traditional tall-and-thin design that provides room for a decent size screen once more. The new model measures a still very modest 76.5mm high and 39.6mm wide, but increases the size of the screen to a more practical 2.5 inches. The nano also regains its ability to play video, and while its 240×432 resolution is fairly modest – especially compared to the high-resolution Retina displays used by the iPod Touch and iPhone – it’s adequate for watching the occasional music video.

The screen is touch-sensitive, as before, but the increased size makes it a lot easier to browse and flick through your music and video collection – though it’s a shame that the old coverflow view for album artwork is no longer available. There’s also a pair of good old-fashioned volume buttons on the side so that you can adjust the volume without taking the iPod out of your pocket. Battery life is rated at a maximum of 30 hours for audio, although video playback is a more modest 3.5 hours.

The larger screen means that this model is slightly heavier than its predecessor – though at just 31g it’s probably not going to slow you down when you’re out jogging. Even so, Apple has still managed to slim it down even further, from 8.8mm thick to a wafer-thin 5.4mm. It really is amazingly thin, and I often find myself idly rolling it around in my hand just because I like the feel of it. 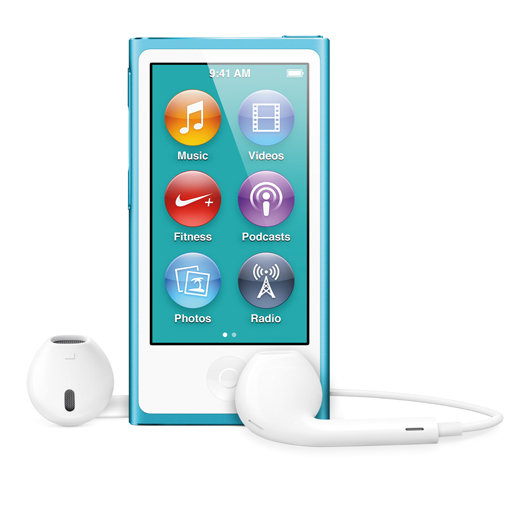 It looks good, too, with a new aluminium case that is available in no less than eight shiny colours. The case seems tough enough to withstand the occasional bump, but I am a bit worried that it could get scratched quite easily. You should probably buy a protective case if you want to keep it looking shiny and new.

Despite the super-slim design, Apple has still managed to cram plenty of useful features into the new nano. Like the last version it has an FM radio, along with a built-in motion-sensor and pedometer for jogging junkies and – hallelujah! – the addition of Bluetooth for streaming music to wireless speakers and headphones. But don’t forget that the new Lightning connector requires an adaptor (£25) in order to work with existing iPod docks and speakers.

And, on the subject of headphones, Apple has also updated the little earbuds that it includes with the iPod nano. The new ‘earpods’ are certainly an improvement, with stronger bass and greater clarity on higher frequencies – though I won’t be giving up my trusty Sennheiser headphones anytime soon.

We also have mixed feelings about Apple’s pricing. We were pleased to see that the 16GB model has been cut from £159 to £129 – but disappointed that there’s no longer a cheaper 8GB model any more. And with the iPod Shuffle only offering 2GB of storage there does seem to be a really obvious gap in the iPod line-up between the Shuffle at just £40 and the nano at £129.