Whilst it’s an ingenious idea, where the Zorro Macsk suffers is primarily down to the fact Mac OS X has not been designed as a touch-screen operating system. The gestures that replicate functionality otherwise carried out by the mouse are not perfect, and with the size of some icons on the screen you’ll have trouble taking control of your computer.

Apple have two distinct product lines: touch-screen devices such as the iPad and iPhone, and desktop products such as the iMac, MacBook and Mac Pro. Whereas Apple’s belief is that touch-screens are better suited to portable devices, TMDTouch have released the Zorro Macsk – a USB plug-in cover for the iMac that brings touch-screen capabilities to the desktop iMac range.

Available now for 21.5″ iMacs (with a model for 27″ iMacs to follow), the Zorro Macsk looks immediately like the front of an iMac. It has holes for the camera at the top of the screen, and the Apple logo towards the bottom; and connects to your Mac via a USB plug. When it’s all connected you can leave it where it is – it doesn’t get in the way of normal operation at all. There is no software to install – when you plug in the USB lead your computer takes a few seconds to recognise the device, after which you can just use it.

It’s an interesting way of interacting with the Mac. What was immediately noticable was a delay of a few seconds when carrying out dragging operations. Selecting the title bar, then moving it across the desktop resulted in the window following the finger rather than going with it.

Using the Brush tool in Photoshop, we’d expected to be able to sketch on screen. What happened, however, was a dot just where we started the sketch followed by nothing else. If that had worked better, it would have certainly made an interesting new way to sketch on screen. 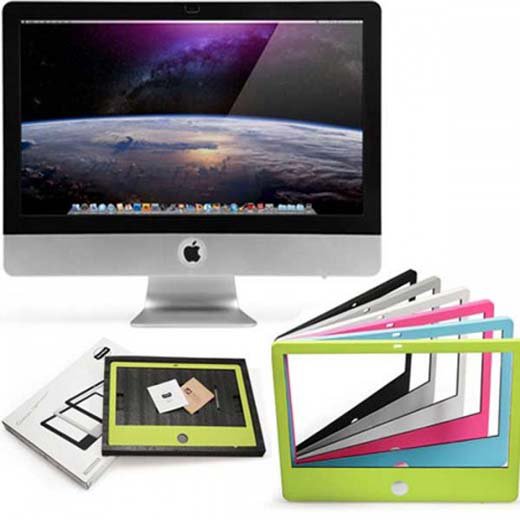 The Zorro Macsk boasts that, using a variety of actions, you can carry out on-screen activities much as you would on an iPad or iPhone. On the whole these work well – zooming into the screen using a two-finger pinch, for instance, does as you’d expect. Trial and error will help identify which work best for you: it seems to be down to the window that has input focus on screen, and the location on screen where you carry out the action.

There are obvious applications for the Zorro Macsk – if you’re using a Mac as part of an interactive presentation in a school, business or university then being able to focus the input on screen (perhaps with a Keynote or PowerPoint presentation) means not having to have a keyboard/mouse floating about. It’s also an application where the Zorro Macsk will excel – simple screen-touches resulting in almost instant response.