Cartoonishly fun if a little rough around the edges, Bad Piggies for iPhone has a strong look and gameplay that’s enjoyable in small doses. But the emphasis on chaotic action – not to mention the disappointing amount of trial and error involved in solving its challenges – mean it lacks the compulsive appeal of more brain-taxing puzzle games.

The latest iPhone and iPad puzzle game from Angry Birds maker Rovio sees you protect the green pigs, instead of slaughtering them. Here’s our Bad Piggies review.

A relapse can’t be far off, but Rovio is currently going cold turkey on Angry Birds. This is the company’s second release in a row that doesn’t involve catapulting feathered creatures through the air, although this one is less of a departure than Amazing Alex, which we looked at last month. The green pigs have been given their own game, called simply Bad Piggies. (For this review we looked at the iPhone version of Bad Piggies. Bad Piggies HD is available for iPad.)

So we’re still in the world of cute cartoon animals struggling to contend with semi-realistic physics puzzles and a total lack of storyline. The main difference is that instead of destroying structures, you’re building them: each level requires you to put together a rickety vehicle of sorts, using a limited number of parts and gadgets, to transport your helpless, wobbly pig to the finish line. As you progress through the game your potential array of parts expands, adding various types of wheel, dynamite, fans, bellows and motors to help you achieve locomotion (and survival).

In the Heath Robinson inventor side of things Bad Piggies is obviously indebted to Amazing Alex, but this side of things is less well realised. The focus shifts from the initial building process (instead of moving things around organically, you get a simple grid in which to place your parts) to the subsequent journey, in which you will have to periodically switch gizmos on your vehicle on or off to traverse tricky bits of the terrain.

Unfurl your umbrella at the right moment, for example, and you can float elegantly down an abyss; or uncork a bottle of pop to get a brief, one-off burst of speed. Get your timing (or construction) wrong and your pig will come to grief or simply fail to reach his goal. 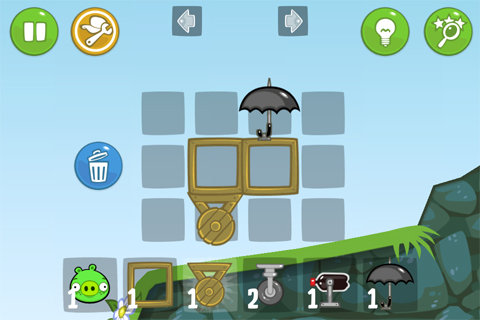 Some may enjoy this element of gentle action, and Bad Piggies certainly has its moments. But for us it makes the game feel less cerebral than we’d like. The best puzzle games, such as Cut The Rope and to a lesser extent Amazing Alex, give a strong sense that there is a perfect solution, even if it’s just out of your grasp. So you stare fixedly at the level and grill your brain for the answer.

But in Bad Piggies – as was often the case with Angry Birds – you tend to muddle through, sometimes getting through with two or three stars without really understanding what you did that time that was better. 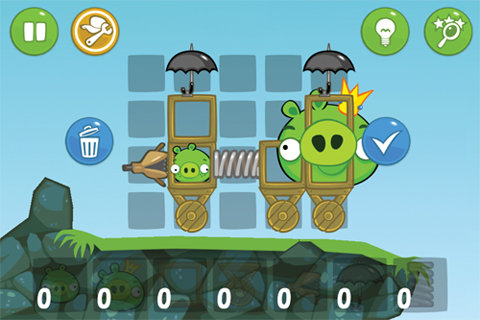 The physics effects are still sound, however, and the range of gadgets is enough to keep things fun, particularly once the really interesting ones become available; a nice touch is a sandbox mode where you can mess around with all the parts you’ve unlocked. And although things haven’t exactly moved on from Angry Birds, the look of Bad Piggies is strong, with a nicely anarchic Roadrunner feel and surprisingly characterful sprites. Props to Rovio for realising how sympathetic those cuddly pigs could be. 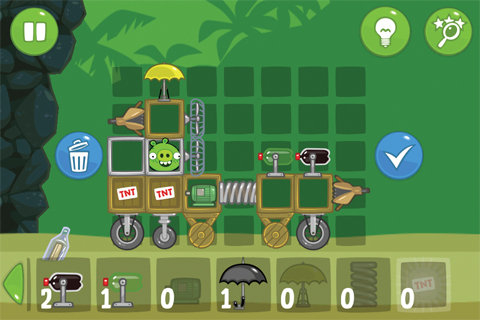 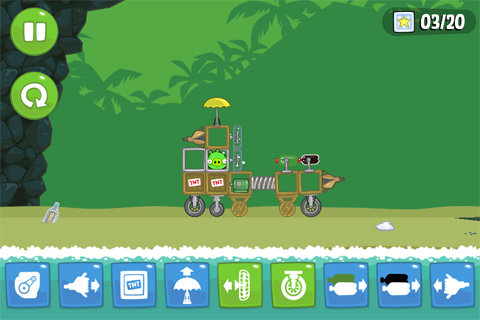 And this is the journey in progress: tap the button for whichever gadget you want to switch on or off 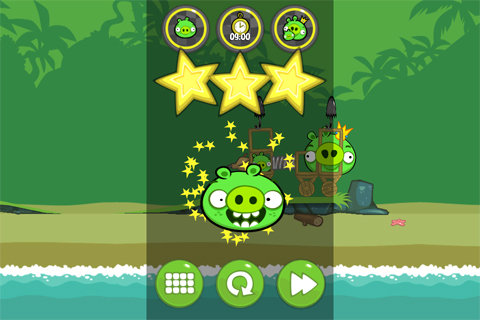