There’s a lot to like about the new iStopMotion for Mac and the drastic price drop, coupled with its support for using iOS devices as a camera mean that more people will be able to afford to get into this age-old art of stop motion animation and have a lot of fun doing so.

Who hasn’t drawn little characters in the corner of a notepad’s pages and flicked them to animate a short scene? Recently, technology has moved so fast Boinx, the makers of the amazing iStopMotion on the Mac released an iPad version… then something happened; based on their success with that app, they totally redesigned the original and best of all, offered it at an amazingly reduced price in order to entice more people to give stop motion animation a go.

You can take photos with any camera, but if you have a model that’s compatible with iStopMotion, you can see what you’re about to take on your Mac’s screen. By default, the previous shot is overlaid over the new one to help you see which parts of your scene need to move and which don’t. Even better, this feature works with your iOS camera too: download the free iStopCamera app and you can use your iPhone 4S and 3rd generation iPad to capture 1080p resolution shots, and the iPhone 4, 4th generation iPod touch and the iPad 2 for 720p shots, over your wi-fi network.

The list of features is impressive. Basically, everything you could do with the previous version – for – is available in this new, more streamlined version. And best of all, you can easily export your film to a video editing app like iMovie or Final Cut Pro X and further enhance your film, by adding titles, effects, etc. That’s good, because iStopMotion’s own editing features are limited, and even frustrating at times.

In addition to this, you can work with chroma key (ie, if you have a blue or green backdrop, you can digitally remove it), add a foreground image as well as a backdrop – some of which are included), even create a time lapse video. 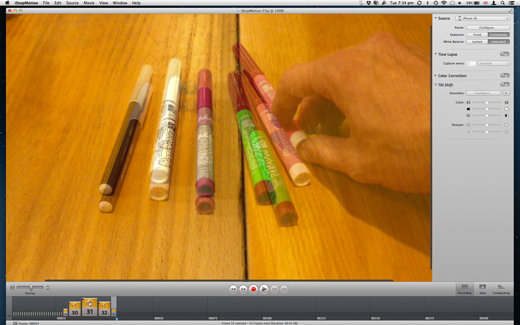 By default, your previous frame is overlaid so you can easily see what needs to be moved in the next one.