Angry Birds Star Wars is a great game. Star Wars fans will love the quirky mix of characters, and Rovio deserves a lot of credit for thinking of ways to include Star Wars style effects into the Angry Birds game mechanics. It’s a new way to play Angry Birds, and a great way to while away a few hours. 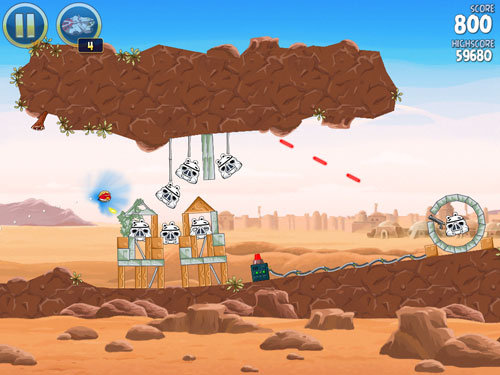 But is it any good? And aren’t you bored of Angry Birds by now? We thought so, but as we reviewed Angry Birds Star Wars we found its new features compellingly entertaining.

As befits an Angry Birds mashup, the birds themselves are all dressed up in Star Wars garb. The birds the Jedi and the pigs playing the Empire. So you get the red birds in Mark Hamill wigs, the black bomb birds in Jedi hoods, and so on. We found the bird versions of R-2D2 and C-3PO particularly entertaining. The noises they make are a mixture of bird shouts and Star Wars mutterings, compellingly blended together.

The backgrounds are a mixture of Star Wars locales: Tatooine, The Death Star, Hoth, and outer space. And it’s quite lovingly rendered too, Rovio has put the devil into the details with lots of structural elements for fans to spot. And it mixes the gravitational mechanics from Angry Birds with Angry Birds Space to good effect.

But the thing we like about Angry Birds Star Wars is that Rovio has taken the time to expand the classic Angry Birds gameplay with some new elements. The birds themselves now have force powers, the red bird can swing a lightsabre once mid-flight to cut through boxes, the black bird can use a force push move, R-2D2 has a lightning attack; the pigs, on the other side, can now man laser turrets and fire paths of laser bolts in your way.

These new elements have subtly changed the gameplay, and made it feel fresh and interesting. You can find new ways to mix the powers up, for example. The red pig can fly into the laser path and use the Lightsabre move to deflect laser towards other pigs (very Star Wars), while Force effects can be used through walls. The Han Solo bird can fire three laser bolts in mid-flight, which bounce of the silver blocks. So you can get quite creative with solving the levels.

You can also collect Millennium Falcons which can be used on each level. You fire it into position and it then swoops to take out all the pigs. You don’t get the regular stars for that approach, but a bronze, silver, or gold medal. So each level can be completed using the birds, and the Millennium Falcon.

Star Wars fans will know that there have been a few hit and miss Star Wars-themed games over the years, and while Angry Birds Star Wars is a comical diversion it’s quite a way away from the serious Star Wars game that many a fan might like, but there’s humour here, and it’s mixed with good gameplay.

Perhaps the only downside is that it seems ever so keen to sell you upgrades from the get go. Its’ quickly offering you bonus Millennium Falcons for cash, and a Path Of The Jedi set of levels cost you an extra £1.49. It’s also annoying that Rovio continues to see two different versions; one for the iPhone and one for the iPad.