Railroads! is intentionally something of a throwback to an earlier era of gaming, and probably won’t appeal to people who prefer the fast-paced action of the latest shooters. But if you’re a fan of tycoon and management games then Railroads! will provide a satisfying challenge and a digital railway set that will keep you busy for hours on end.

It’s been good to see A-list games like Black Ops and The Witcher 2 coming to the Mac recently. However, the blood, guts and four-letter expletives that these games indulge in won’t suit everyone – and certainly aren’t suitable for younger players.

So it came as something of a relief when Feral Interactive announced that they were bringing the more sedate charms of Sid Meier’s Railroads! to the Mac. Originally released on the PC in 2006, Railroads! is itself an update of the 1990 game, Railroad Tycoon, which went on to spawn an entire genre of ‘tycoon’ games. It follows the same basic formula as its predecessor – but with more modern 3D graphics – and allows you to build your own railway empire, starting with a simple stretch of track between two cities and then expanding across the entire country.

The game is set in the early 1800s, and includes seven single-player maps covering the US, Britain, France and Germany. As you start to lay down more track you’ll need to build depots and stations, and to buy a whole fleet of different trains. If you’re ferrying passengers and mail between cities then you’ll want to invest in faster trains, while cargo such as lumber or coal will require slower, sturdier freight trains.

There’s a tutorial to help you get started, and you can also play the game on your own in ‘sandbox’ mode. Once you’ve got the hang of the basics you can move on and play against up to three computer-controlled railway rivals in order to give yourself more of a challenge. 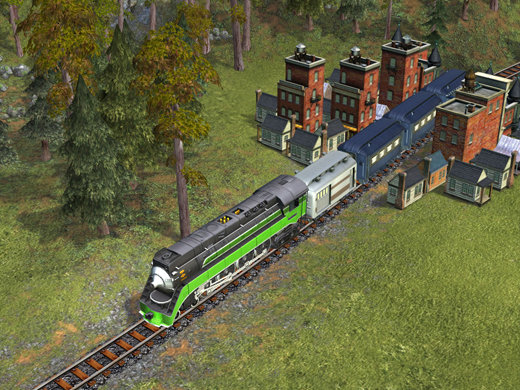 The game also includes a number of multiplayer maps designed for either LAN or online play. But, for some reason, Railroads relies on the not-terribly-well-known GameRanger service for finding other players, so it’s not clear at the moment how popular that multiplayer mode will be.