Some people may find the lack of different character classes a little restrictive, but the vividly drawn world of the The Witcher 2 will appeal to anyone that enjoys old-school role-playing games. It’s good value at £19.99, and with the first game also available now you’ll have many hours of engrossing role-playing action to see you through the long cold winter months ahead of us.

It’s been a surprisingly good year for games on the Mac, with some major A-list titles coming our way – often with very little fanfare too. Last month saw Guild Wars 2 appearing out of the blue and we were equally surprised – and pleased – to hear that The Witcher 2 was now being released for the Mac.

The Witcher 2 is undoubtedly one of the best role-playing games released in recent years and, as the name implies, it’s the sequel to the original Witcher game that was originally released on the PC back in 2007. Both games are based on the popular series of fantasy novels written by Polish author Andrzej Sapkowski that follow the adventures of Geralt of Rivia – a ‘witcher’ who roams the mediaeval fantasy kingdom of Temeria, slaying monsters and generally being mean and moody.

We were pleased to see that the original Witcher game is also available for the Mac now – and at a mere £6.99 too – so role-playing fans can go back and enjoy the saga of Geralt right from the beginning. This sequel introduces a new storyline in which a mysterious group of assassins seems bent on bumping off all the local nobility. This leads Geralt into a web of political intrigue and skullduggery as he attempts to discover the identity and motives of his mysterious foes.

Role-playing fans will quickly find themselves drawn into this rich – and often adult – storyline. However, the Witcher games are a little unconventional when compared to more traditional RPGs such as the Dragon Age series. You don’t have a range classes that you can choose to play, such as wizards, priests and rogues. Geralt is essentially a swordsman, although he does have access to a limited range of magic ‘signs’ and alchemical potions that can give him an edge in battle. The combat and skill systems are also quite complex so you’ll need to devote a bit of time to mastering them at first. 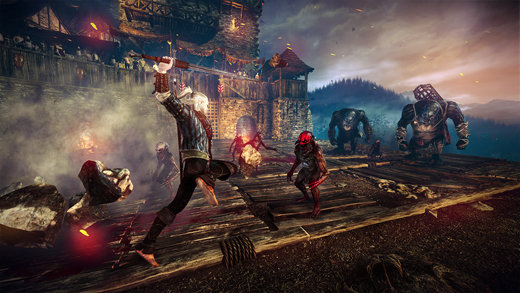