The Thunderbolt SSD does work well when handling larger file sizes, and its sturdy design will appeal to photographers or videographers working on outdoor shoots. However, its more modest performance with smaller file sizes suggests that it’s not the best choice for general home or office use. And, at this price, it should also include additional features such as the alternative USB 3.0 interface found on the less-expensive Rugged drive from LaCie.

Elgato’s Thunderbolt SSD is solidly built and performs well. However, it’s also the most expensive drive in this group by a large margin, costing almost £240 for 120GB storage.

The Thunderbolt SSD gets full marks for build quality, with a sold metal casing that should certainly be able to survive a few knocks when you’re carrying it around with you. Elgato also offers a full three-year warranty on the Thunderbolt SSD, which should provide some extra peace of mind for people who are likely to submit the drive to more extreme outdoors conditions.

It performs well too, with its Thunderbolt interface achieving write and read speeds of 228.5MB/s and 322.2MB/s when running the Aja System Test with large video files. Not surprisingly, it left the USB 3.0 drives from Kingston and Verbatim far behind, and also pulled just a fraction ahead of the LaCie Rugged, which is the only other Thunderbolt drive in this group.

However, the tables were turned when copying our 5GB batch of smaller test files. The Thunderbolt SSD stumbled here and dropped well back in to second place behind the LaCie drive, suggesting that it is best suited to specialist applications such as video-editing that focus specifically on larger file sizes. 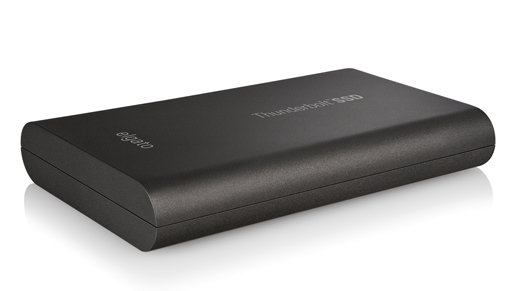 The Thunderbolt SSD also lacked some additional features found in the less expensive Rugged Drive. The Thunderbolt SSD just has a single Thunderbolt interface on it, which means that you don’t have the option of connecting it to a Mac or PC that doesn’t have Thunderbolt. There’s no additional bundled software either, to provide options such as encryption or password protection. We also found it odd that there are no status indicator lights anywhere on the Thunderbolt SSD, and we missed having that comforting blinking light to let us know that the drive was working properly when copying files onto it.