Gemini Wars is a solid and challenging strategy game, with some impressive graphics in the combat scenes. However, the pace of the game and the rather formulaic storyline mean that this a game for the more thoughtful strategy fan rather than budding Han Solos looking for a spot of outer space shoot ‘em up action.

We need to get a move on, as we only have about 150 years in which to discover interstellar travel, colonise the Omega Sector in outer space with a few billion new citizens, and then declare war on them when they make a bid for independence.

That’s the plot of Gemini Wars in a nutshell – although halfway through writing the manual the developers seem to have decided that ‘ Gemini Wars’ sounds better than ‘Omega Wars’ so they suddenly switch the action to the Gemini sector instead.

Still, wherever it takes place, Gemini Wars is a challenging outer space strategy game in which you play the role of a commander with the Earth-based United Space Federation. You start off with a simple training mission, escorting a group of supply ships to a nearby space station. When the breakaway forces of the Alliance Of Free Worlds launch a surprise attack you take control of the station and then embark on a series of missions that make you a key player in this space-age war of independence.

You can colonise additional planets in order to harvest their resources, and research new technologies that will allow you to build a variety of powerful ships. And, just to spice things up a bit, an alien race known as the Gark soon appears on the scene as well, leaving both sides wondering what they’re up to. 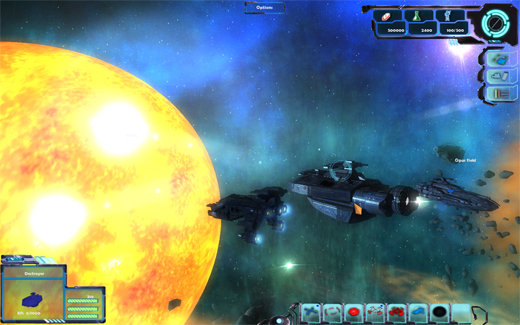 Some aspects of the game are well thought out – the graphics can be spectacular at times, and the variety of ships and technologies available gives you plenty to think about. However, the story isn’t terribly involving, and the action moves at a fairly sedate pace – as any good space pilot knows, half the problem with interstellar combat is that it takes ages to get there in the first place. And, as with some other games from Iceberg, we initially had some problems figuring out the keyboard and mouse controls, as the manual supplied with the game seems unaware that Mac keyboards and mice are different from those of Windows PCs.