Google Maps is a free app so there’s nothing to stop you from downloading a copy and using it instead of Apple Maps (although remember that Google is ultimately making its money by tracking your information). We’ve already got Google Maps on all our iOS devices and are likely to be using it instead of Apple Maps from here on in, apart from perhaps step-by-step navigation which we will test over time to see which offers a better service. 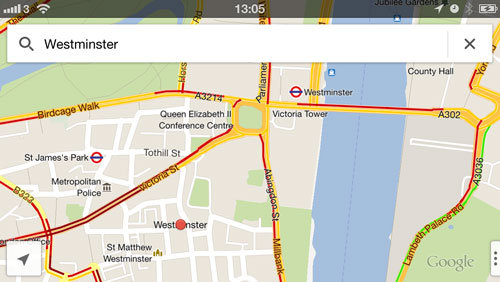 Apple’s iOS 6 software update saw the Apple-created implementation of Google Maps removed and replaced with Apple Maps. Despite introducing a raft of new features, it  turned out to be a highly controversial move on Apple’s part. Stories of Map inaccuracies, missing information, and incorrect search results spread across the Internet. The general consensus: Google Maps was better and it was a rare step back for an Apple product to make. Tim Cook, Apple CEO, apologised for the move and promised that Apple work strive to improve the product.

Google also makes the rival Android operating system, so there was initially some doubt as to whether it would release an iOS replacement. But Google has clearly decided that it’s better in business on the iPhone than staying away, and here we have a compellingly feature-rich implementation of Google Maps that is manifestly better than the Google Maps app that Apple created and removed, and arguably better than Apple Maps (at least on the accuracy front).

The first thing to note is that this is an iPhone app, and Google hasn’t released a iPad version of its Maps software. It makes sense for Google Maps to focus on the iPhone rather than the iPad to start with. And the iPhone is the device you’re most likely to be using when out and about.

The good news is that Google Maps is a free download and Google is releasing an SDK for developers to integrate Google Maps back into their apps (if they’d prefer it to Apple maps). Aside from Siri and Address Book integration (which is deeply embedded into Apple Maps) you could drag the Apple Maps app out of your home screen, drop in the Google Maps app and you’re back to where you started before iOS 6 happened.

The first thing you’ll notice as that both apps are surprisingly similar. A lot of this is that an Map app is a map app and most of it is displaying, obviously, a map. The Google Maps interface seems slightly less cluttered to us, but this because it hides more location items until you zoom further in. The default Locate me button for Google Maps zooms further in by default than it does on the Apple Maps app.

There’s no doubt that Apple cartography is visually nicer than Googles, the icons for businesses and the textures used to define different areas are much cleaner. Apple Maps also feels snappier to us.

Google Maps has a familiarity to it based on years of usage: blue roads are motorways, green roads are major A roads, orange is smaller A roads and B roads, white is small C and D roads. So you can quickly see which are the main thoroughfares in the spaghetti mess that is the UK highway system; Apple Maps has roads (white) and motorways (orange). 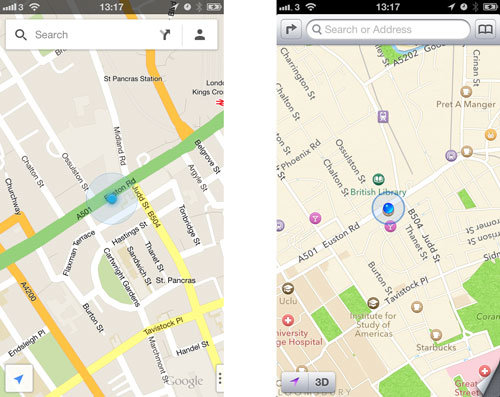 Google Maps are more colourful with A roads identified with Green and Orange markings. Apple Maps only identifies motorways in a blue colour.

The Google Maps interface is slightly more detailed than Apple Maps, but on the whole extremely similar. On the top is a Search Box, Directions icon and Profile icon. The bottom left has the Location icon. The to right is a Slider app that enables you to choose Traffic, Public Transit and Satellite view (and there’s also a link to the Google Earth app).

A nice touch is that search offers Favourites, and Recently Searched places that are near your current location.

When you select an item (a pin or a location landmark) the information appears in a bar at the bottom of the screen rather than in a pop-out box. This is marked departure from both the Apple Maps app and Google’s Android app. Tapping this opens up further information such as photos, address, telephone number, website and reviews. And it also sees the return of – drum roll – Street View. 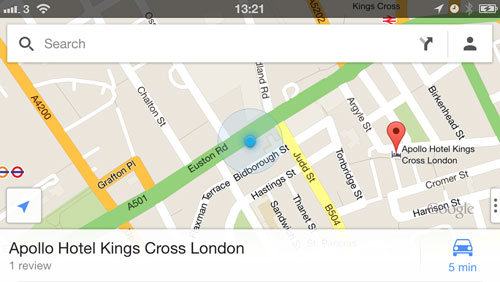 One welcome relief is the return of Street View to the iPhone. Although the interface doesn’t have the same visual swish as the iPhone version that Apple created, it is every bit as useful and functional as before. You can pan around with one finger, and zoom in with a pinch to zoom command. One slight oddity is that it is still using the two arrows to move around, whereas the Android version has gone for a ‘Drag The Yellow Man’ icon approach that is more similar to the tap anywhere to move approach of the Google Maps website. 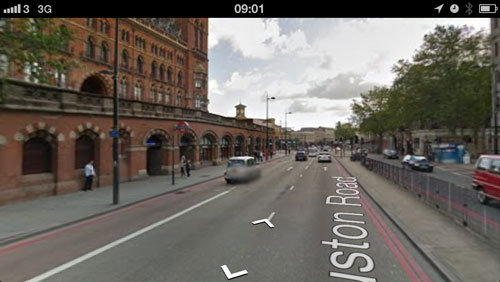 On the whole though we can just breath a sigh of relief that one genuinely useful feature that was missing from the iPhone has returned.

One area that Google Maps clearly has the advantage over Apple Maps is in search. Search is big problem for Apple Maps. We assume because Apple doesn’t have the back-end search data (the BigTable three-dimensional mapping) that Google has; and hasn’t spent years analysing data. 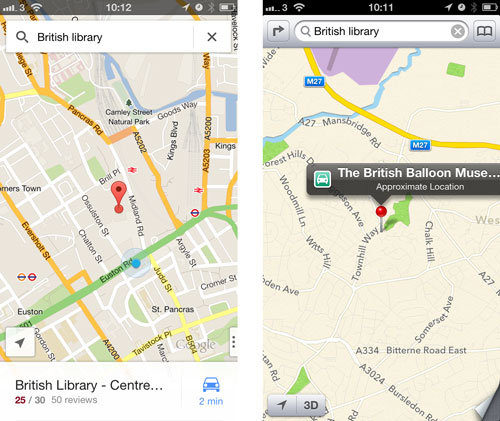 Another neat touch is that you sign in to Google Maps with your regular Google ID. This means you can view your Search History, set Home and Work locations, and add Favorites (these synced instantly on our testing). It’s neat to be able to access your Maps search history and favourites from your desktop usage on the iPhone.

There have also been plenty of reports of data inaccuracy in Apple Maps, and it’s clear that Apple initially had a problem with its cartography. Apple has vowed to work on this and we can see cartography fixes as we go.

As recently as 10 December the Australian Police issued a warning against using Apple Maps application as it showed the city of Mildura near the Murray Sunset National Park when it is actually located 44 miles away.

In terms of content (bars, restaurants, businesses, and so on) we noticed the Apple Maps app was surprisingly sparse upon launch but has started to fill up in London and other major areas around the world.

Apple Maps is getting better, but there’s no doubt in our mind that Google Maps is probably the more accurate of the two. We’ll do detailed cartography testing as we go on, but Google’s heritage mapping solutions simply means its had more time to spot and fix any errors and inconsistencies. There’s no way Apple can get around this other than by plugging on with its updates and improving as it goes.

Perhaps more importantly, is the perception in people’s minds that Apple Maps is now inaccurate, and that Google Maps is accurate. It’s a trust issue. These kinds of perceptions, especially when so highly publicised are hard to shift. We do remember quite high profile stories mocking Google Maps for its inaccuracy when it launched, and Google clearly worked over time to improve the image of Google Maps. Maybe Apple can do the same, or maybe enough people will just use whatever Maps service is installed by default. 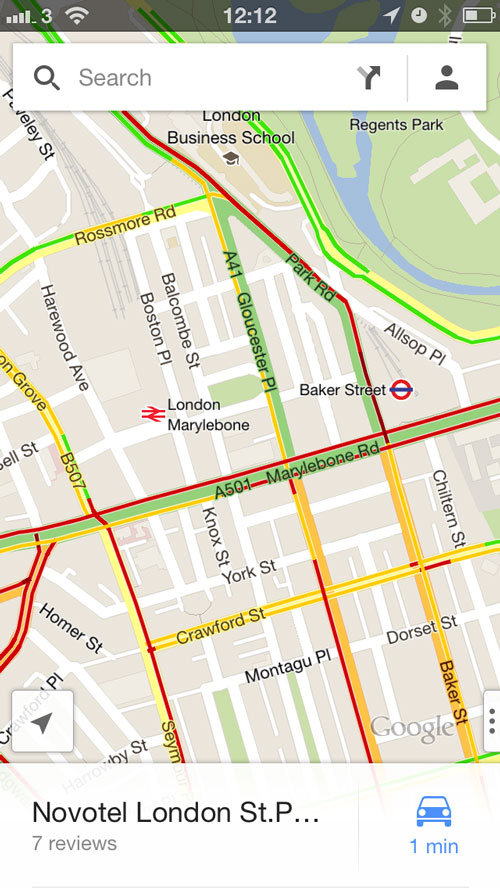 Another neat feature is that Google Maps, along with the new Apple Maps, offers turn-by-turn navigation. This was apparantly the sticking point in the license between Google and Apple that made Apple ditch Google Maps and go with its own product. It comes with a warning that the service is still in beta, and that you should pay close attention to your surroundings. We’re not sure if this is just Google hedging its bets against any reverse-backlash or whether it’s . Our preliminary tests seemed fine.

The step-by-step interface is slightly less clear than Apple’s Maps implementation, which is actually fairly important when you’re just glancing at a map while driving a car. It does, however, have voice feedback. 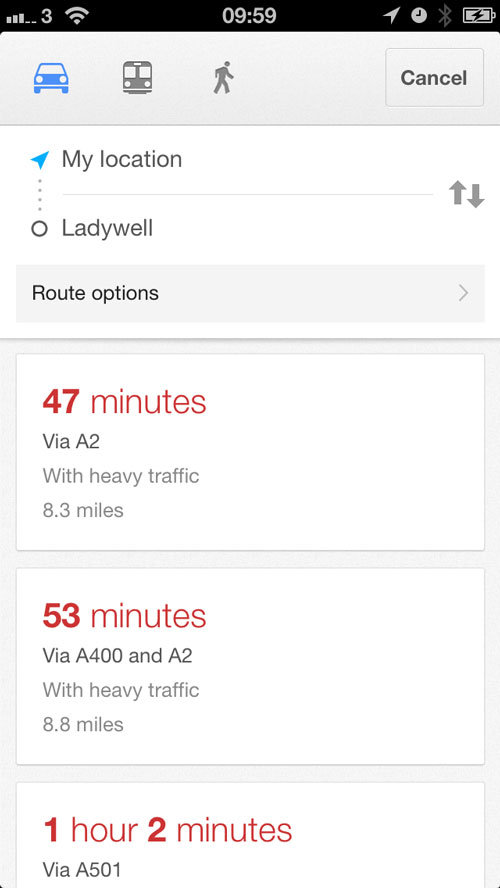 What Google Maps doesn’t have is Siri integration. Siri is turning out to be more and more useful for in-car navigation, and although it’s still not as good at understanding us as we’d like, the idea of being able to issue voice commands to your sat-nav system while driving is exceptionally appealing.

We need to spend a little more time pitting Google Maps verus Apple Maps in terms of step-by-step navigation before declaring one system definably better than the other. On the whole it’s a good implementation, and one good thing that’s come out of the whole Maps fiasco is that you now have access to not one, but two free apps that offer a comprehensive satellite navigation solution, for free, on your iPhone.

Remember that Apple Maps driving is powered by Tom-Tom, which has always been our preferred sat-nav app on the iPhone, so we think it may well have the edge when it comes to step-by-step navigation. 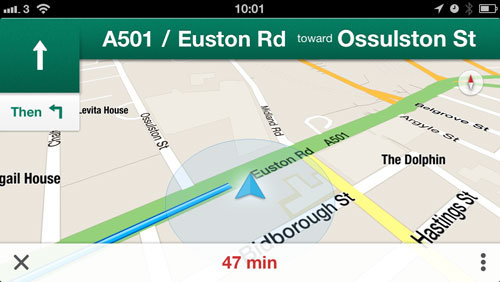 In terms of what’s missing in Google Maps we can compare it first to Apple Maps. Aside from the deep system-wide integration of Apple’s default map. Apple Maps works with Siri, and has access to your Contacts information so you can simply say (or tap) direct me to John Smith and it’ll do the trick.

While Google Maps has a 3D function of sort, it doesn’t have the same kind of office building integration that Apple Maps so the 3D mode isn’t as detailed. Although Flyover can seem a bit of a visual trick sometimes, the 3D wireframe mode is particularly helpful at identifying your location via surrounding buildings.

Both have pretty decent traffic information, but Apple Maps also has detailed roadwork information (that is crowd-sourced via Apple’s deal with Tom-Tom). This can make all the difference when driving, especially in urban areas like London. 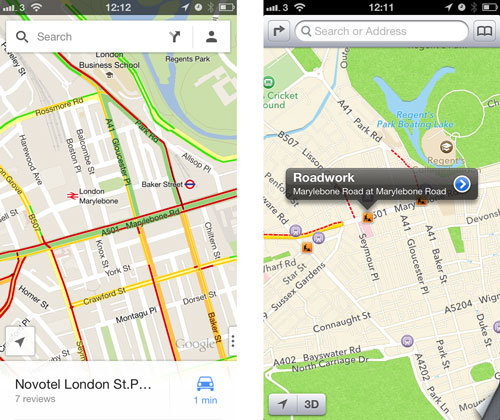 In comparison to the Google Android version of Maps, there are a few missing features. Google Maps on iOS doesn’t have the Layers menu, which also offers Terrain, Public Transport Lines, Wikipedia entries, and Google Latitude. Google itself has stated that Google Maps on iOS is better than Android, and in terms of interface and design it is: but there’s clearly some room for it grow in terms of content.

None of these are really deal-breakers, and Latitude is available a separate app on the iPhone (or you can use Find My Friends instead), and we’re sure that Google will implement as it moves forward.