Batman’s hand-to-hand combat moves may take a while to master, but the atmospheric design of Gotham City and the parade of Batman’s greatest foes makes Batman: Arkham City a real must-have item for any fans of action and adventure games.

The Mac version of Batman: Arkham City arrived just before Christmas, and topped off a surprisingly good year for the Mac games scene.

The previous Batman game was set in the claustrophobic confines of Gotham City’s infamous Arkham Asylum, but this time around the action expands onto a much larger canvas, as an entire section of Gotham City has been walled off and turned into a vast open-air prison ruled over by a selection of Batman’s greatest foes.

At the start of the game, Bruce Wayne is kidnapped by the evil Hugo Strange and dragged into Arkham City. You then have to fight your way free of Strange’s henchmen and uncover the secret plan that he refers to as Protocol 10. Along the way you’ll encounter famous Bat-baddies such as The Penguin, Two-Face and, of course, the clown-prince of crime himself – The Joker – creepily voiced by the former Luke Skywalker, Mark Hamill.

The Riddler’s in there too, with a fiendish assortment of puzzles and other challenges that provide some extra fun alongside the main mission. This Mac version of the game is also good value for money, as it includes a number of add-on packs, such as Harley Quinn’s Revenge, which takes place after the events of the main games. There’s also a set of special missions that you can play as the slinky, whip-cracking Catwoman. 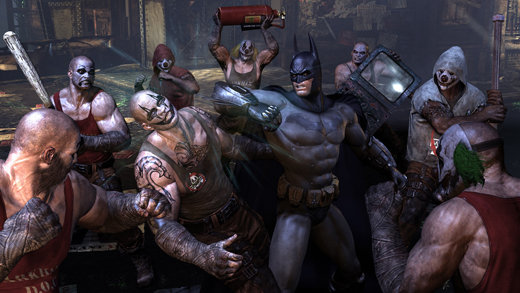 Arkham City is a dark, gothic playground for Batman’s foes

Taking the game outdoors was a smart move for this sequel, allowing the game’s designers to create an impressive and atmospheric Gotham City, full of both vast gothic landmarks and narrow, grimy alleyways. It also provides a wider range of combat options, allowing you to bat-glide over the rooftops or to go sneaking around the dark streets in search of clues.

Mastering combat can be a bit tricky at first, though. Batman has a confusingly wide variety of offensive and defensive moves that he can employ, along with an extensive arsenal of bat-gadgets, such as the Batarang, explosive gels and grappling hooks. It takes a while just to get the hang of the basics, but it’s very satisfying when you manage to bat-glide and swoop down onto an unsuspecting thug for the first time, or pull off an evasive move that allows Batman to go cart-wheeling past a group of the Penguin’s henchmen.

The game’s 3D graphics are impressively detailed and atmospheric, but they do require a reasonably powerful Mac to run smoothly. The Intel HD 3000 graphics that were widely used in the MacBook and Mac Mini ranges in recent years can’t really handle the game, and even the newer HD 4000 graphics processor used in this year’s models can only just about pull it off. But, if you’ve got an iMac or MacBook with a decent graphics card then the game looks terrific – and ran perfectly well with the Radeon graphics card in my three year old iMac. It’s definitely worth checking Feral’s web site for the system requirements before you buy the game.