Despite the less than ideal process of working remotely and the bewildering pricing structure, LogMeIn is still an excellent option for taking remote control over your Mac or PC. Both free and paid versions have attractive and useful features, which on the iPad especially brings your business or home computer that bit closer on your travels.

LogMeIn is an iOS app that allows users to access and remotely control work and home computers via iPhone, iPod touch and ideally iPad, anywhere you have an Internet connection. Aimed essentially at business users, it also has much wider appeal. Set-up is simple and requires users to pair the free iOS app with any computer, although that computer needs to be on, or at least woken from sleep to be seen. Hardly environmentally friendly, it’s also not ideal if you have sensitive information on your main computer you don’t want your colleagues or family to see. Accessing your computer and files via pinch-screen navigation and gestures seems strange at first and does require some effort to adjust to. On the smaller iPhone and iPod touch screen interacting with your virtual desktop isn’t always a precise process and we noticed the occasional lag. The iPad is a much more friendly and tactile option, which with a little effort makes for a productive and fairly speedy workflow. Additionally, users can temporarily change the display resolution of whichever computer they’re trying to access to improve the iOS experience. 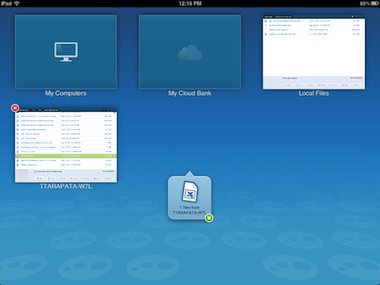 LogMeIn highlights an impressive, if confusing, range of desktop and mobile based business and productivity apps, including Ignition for PC and Android users, join.me and most recently Cubby. Although these are listed under Support, Access, Mobile Access, Collaboration and Other Products, it’s not clear which might be the best option. LogMeIn Free and LogMeIn Pro for PC/Mac, and both free and paid version iOS apps only add to the confusion. Paid options are offered at different prices depending on how you upgrade, via desktop or iOS, and when discounted offers are frequently available. 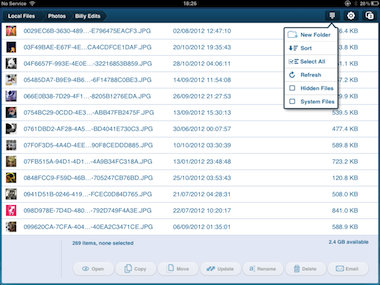 For example, the online iTunes Preview for the free LogMeIn iOS app lists ten Top In-App Purchases available as a three month or one year upgrade. iTunes itself has six options, a one year sub listed at both £17.49 and £27.99. Via the LogMeIn website LogMeIn Pro costs £8.99 per computer per month, or £41.95 per computer per year. You don’t, at least, need two subscriptions, one for computer, one for iOS device, while currently the cheapest premium option is to upgrade via iPad or iPhone and not online. 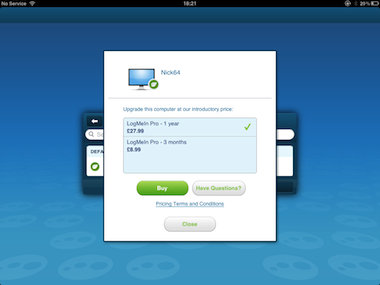 Helpfully, LogMeIn do provide a side by side comparison of free and paid features to determine if the upgrade is worth it. Those premium features include the ability to organise and manage locally saved files, transfer files and folders between remote computers, cloud integration with various third party providers and what the company calls HD quality video. It’s an impressive feature list, although unlike the free version, you’ll need a separate pro account for each computer you want greater control over. If you can pay the cheapest annual option, those extra features represent value for money.