These point-and-click adventures have always been something of an acquired taste, and the rather convoluted puzzles in The Critter Chronicles can be either frustrating or challenging, depending on your point of view. But if you’re a fan of old-school adventuring then The Critter Chronicles will hit your nostalgia nail right on the head.

The Critter Chronicles is the prequel to The Book Of Unwritten Tales – an adventure game that, I confess, I’d never actually heard of. However, the game’s developers say that The Critter Chronicles stands on its own, telling the story of how Nate Bonnet and the muppet-esque Critter first meet and become friends, before moving onto the world-saving adventures that they encounter in The Book Of Unwritten Tales.

Nate is a kind of medieval version of Han Solo, and he starts off in The Critter Chronicles by winning an airship called The Mary in a game of cards – just as Han Solo won the Millenium Falcon from Lando Calamari (or whatever his name was). The game also nods towards Star Wars in occasional lines of dialogue, emphasizing the point that Nate is a rather mercenary character who eventually becomes less selfish as a result of his adventures with Critter.

Like its predecessor, Critter Chronicles very much follows in the style of classic point-and-click adventures from the ‘80s, such as Myst and Monkey Island. You use your mouse to click on various objects on the screen in order to examine them, and then figure out how you can use those objects to solve various puzzles.

These point-and-click adventures are very much a matter of taste. They’re rather like cryptic crosswords, in that some people understand the convoluted logic behind the puzzles, while others will simply find them baffling and frustrating. 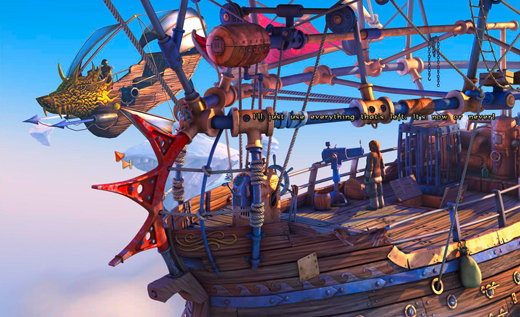 I’m afraid I got stuck right at the start of the game, when the airship’s original owner sends a bounty hunter chasing after Nate. You’re told that you need to arm the airship’s canon in order to fight off the bounty hunter, and I then spent about half an hour aimlessly wandering around picking up corkscrews and paper clips in order to open various boxes and wardrobes and locate the additional items I needed to set up the canon.

The game does provide some help, as hitting the Space bar displays on-screen pointers that indicate some of the objects you can use, but if you’re not used to this style of puzzle-solving adventure game then you may well find it rather frustrating.

On the other hand, veterans of those classic adventure games will probably feel right at home with The Critter Chronicles. The artwork and animation are all very well done, and there’s some good voice acting and jokes sprinkled throughout the game – although Nate himself has a rather cheesy line in dialogue. It might also be a good game for parents to play with young children, helping them out with reading and puzzle-solving along the way. There are also demos of both Critter Chronicles and Unwritten Tales available so that you can try them out and see how this style of adventure game suits you.