Although fans of the Windows version will point ruefully to multiple missing features and effects, Mac users who’ve never seen Sound Forge before will be suitably impressed by the tools on offer, the elegant workflow and the quality of the effects.

It’s not often that Mac users cast admiring glances towards their Windows counterparts, particularly where audio software is concerned, but Sound Forge – currently on version 10 for Windows – is one of the exceptions, thanks to its reliability and deep overall feature set. Given that success, it’s perhaps odd then that, according to Sony, Sound Forge Pro Mac isn’t based on the Windows version at all but instead, is “built on a clean slate” for OSX – so how does it stand up?

For a spit under £175.00 you get a single program that’s capable of recording, editing, processing and then rendering broadcast quality audio files. We’re not talking bedroom home recording either (though it’s more than capable of that) but proper, 32 simultaneous channels at 64-bit/192KHz, which means that with the right hardware, it’ll handle all but the most demanding recording situations.

The interface is sparse but well-organised into a collection of clever panels which contain the various editing views, the plug-in effects chain, browsers, file properties, meters and so on that can be arranged and switched on or off with a couple of mouse clicks. Find an individual audio file in the browser and it can previewed instantly or right clicked and added to a handy list of favourites. The interface is easy to customise and works well, even on a 13” MacBook screen.

Sound Forge includes a range of tools for precision editing of audio files including a pencil mode which lets you draw directly within the waveform and an envelope mode which is great for adjusting the way effect parameters are applied over a specific passage of audio. You get a selection of high quality effects for processing your recordings, including compression, delay, EQ, reverb and various filters; inveterate knob-twiddlers can fiddle with the effects manually, while there are plenty of well-described presets for those less aurally inclined users. We were particularly impressed with the included time stretching features which allow very fine adjustment of time, tempo and pitch and the way that all the effects can be previewed from inside their own settings panels before committing to processing. 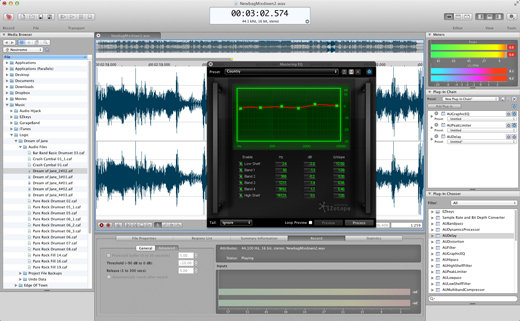 Sound Forge also ships with a suite of professional-level cleanup tools from iZotope – a declicker for removing clicks and pops, a denoiser which can analyse-and-zap noisy sections of audio, and a declipper for smoothing out or removing distorted highs; although these are geared up to favour users with some understanding of audio technology and jargon, with a bit of perserverence anyone can use them to achieve excellent results.

Once audio has been edited and processed, Sound Forge can also be used to apply a range of powerful mastering effects – EQ, reverb, compression, limiter, image (for adjusting the stereo image) and exciter (think analogue-style warmth) – to give recordings that final sprinkle of audio fairy dust.