It’s at that point you realise that Pocket is at it’s best when combined with iOS. The formatting is ideal for iPad or iPhone, making the desktop version a great curation tool for reading on the go.

Pocket belongs to an emerging class of “read it later” applications that enable you to clip and keep web content for later perusal. The key feature of these tools is the ability to bookmark pages and then format text for easier reading. Instapaper and Readability are the key rivals in the field. Apple’s own Safari is a contender too, with a combination of Reading List, a tool that enables you to back-up web pages offline and Reader, a feature that strips out all the images and navigation from a page, leaving you with simply displayed text.

With so much competition, Pocket fights back with a couple of unique selling points. Firstly, Pocket doesn’t just do text. You can also use it to clip videos and images from websites and online services. Secondly, there’s a dedicated desktop application. A very clean, attractive desktop application at that.

The first time you sign in to Pocket, the application holds your hand as a series of screens carefully explain what Pocket is and how to use it. We’d advise that the first thing you do is install the Pocket extension for Safari, as you’ll need it to add content from the web. In fact, we were surprised that the application doesn’t do it for you automatically.

Once you’ve played through the tutorials, Pocket opens a blank slate, ready for content. Pages you send to Pocket appear in a list on the left leaving the rest of the app with a large display area where text, images or videos appear. 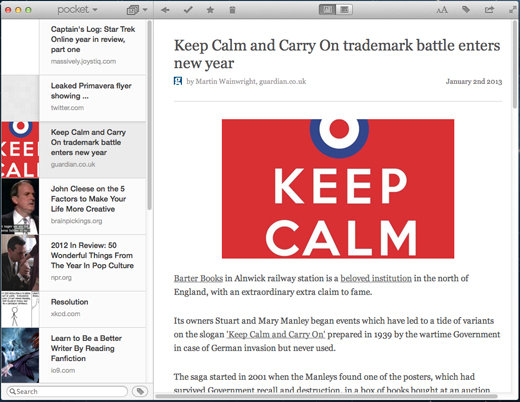 Pocket started its life with the name “Read It Later”. Pocket’s a much better moniker now that video and images are supported.

Like Instapaper and Readability, Pocket strips out extraneous data and formats text for easy reading. Unlike Instapaper or Readability, Pocket leaves inline images intact. The result is a clean, magazine-style layout with few interface distractions. There are some customisation options in the desktop version though. You can make text smaller or larger and switch between Serif or Sans Serif fonts. You can also choose to justify paragraphs.

Pocket enables you to sort content in several ways. Favouriting works as you might expect, placing items in a special list you can easily access later. Archiving removes content from the app, until you want to retrieve it. You can permanently delete content too. The most powerful feature is tagging, which effectively enables you to create as many categories of content as you like and keep them organised.

Developers Read It Later claim that you can clip content from over 300 apps, including Tweetbot, Evernote and Google Reader. We tried all three of those and a few more. In every case Pocket has to be set as the “read later” service for each app – which can be fiddly. Once that integration is turned on, Pocket becomes very useful indeed. We soon had a list full of content for later reading.