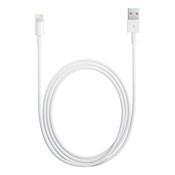 The Lightning to USB cable is a fairly essential purchase. At £15 it’s not exactly cheap, and you can find a few cheaper alternatives to the official branded Apple product if you shop around.

Apple’s Lightning to USB Cable is the main connection that lies between new iOS devices and a power socket, or Mac computer.

The Lightning to USB Cable replaces Apple’s older 30-pin Dock Connector. It is compatible directly with all new iOS devices, so that’s the iPhone 5, iPad mini, iPad 4 and iPod touch (fifth generation). Everything else uses the older 30-pin connector.

Apple moving from the old 30-pin connection to the newer Lightning socket is a tad controversial, although it has to be said that it’s a step forward. Lightning is faster, has more functionality, and is crucially smaller enabling Apple to fit larger batteries or create smaller products. Apple stuck with 30-pin for almost 10 years so Lightning will presumably have a similar lifespan.

At £15 the Lightning to USB cable isn’t exactly cheap for a charging cable, but it’s a good investment if you’ve recently purchased an iOS device and want to charge from multiple locations (such as home and work). A teardown of Apple’s Lightning to 30-pin adaptor shows some of the advanced technology that Apple is using in Lightning, which is partly responsible for the price. The Lightning to 30-pin Adaptor itself is £25, so it’s cheaper to buy this cable than adapt an older one.

There are a number of cheaper options available on Amazon, however, starting from around £2. Although these aren’t Apple or Lightning branded and tend to be from fly-by-night Chinese suppliers, so we can’t vouch for their quality (check the reviews for each one to see if they’re any good). Amazon has this AmazonBasics USB A to Lightning cable for £11.99 which saves you £3 on the official cable price.