From a technical point of view, the AppleTV is as slick and neatly designed as you’d expect from Apple. However, its reliance upon iTunes and Netflix is frustrating for users outside the US, and the AppleTV won’t live up to its considerable potential until Apple bites the bullet and opens it up to a wider range of online video services.

The rumours that Apple might launch an actual TV continue to fly – as they have done for more than a year now – but at the moment all we’ve got is this relatively modest software update for the existing AppleTV box. UPDATE: read our latest Apple TV review.

The Apple TV Software Update 5.2 does introduce a handful of useful new features, but it still leaves us wondering when – or if – Apple is ever going to pull out all the stops and produce an AppleTV product worthy of the name.

Perhaps the most interesting new feature is the ability to pair the AppleTV with Apple’s own Wireless Keyboard – making use of Bluetooth hardware that has previously lain dormant within the AppleTV’s glossy little black box (Apple says that other Bluetooth keyboards “may also be compatible” as long as they match the layout of a standard Mac keyboard).

This simplifies the task of entering network passwords or using the search function when browsing the iTunes Store or the YouTube app. It’s not exactly revolutionary, but it does suggest that Apple is still trying to refine the AppleTV’s interface and make it easier to use in your front room – and that should keep the rumour mill about a full TV product going strong for at least another six months. 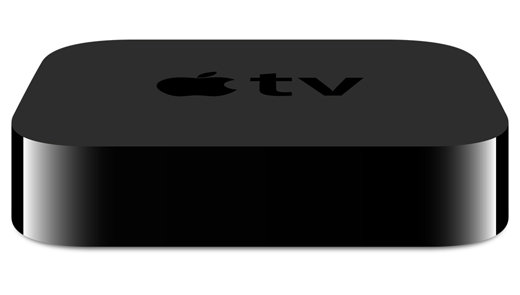 Improved iTunes support allows you to play your purchased music using iTunes In The Cloud, rather than having to pay for the additional iTunes Match service. However, I’m more intrigued by the fact that the AppleTV now has the ability to transmit audio via AirPlay to a set of AirPlay speakers. The AppleTV could already receive audio and video from Macs and iOS devices using AirPlay, but this software update means that it can now also transmit the audio from films and other streaming video content to a set of external AirPlay speakers. That will be great for watching films and TV programmes, as it will give the soundtrack a real boost compared to the relatively modest speakers that are built into most TV sets.

It’s annoying, though, that this new feature only works with expensive AirPlay speakers. If you can pair the AppleTV with a Bluetooth keyboard then you should also be able to pair it with Bluetooth speakers too – which are generally a lot less expensive than AirPlay speakers.

It’s this blinkered Apple-only approach that remains the AppleTV’s greatest weakness. It still has the best graphical interface of any streaming media device currently available, but in its current form the AppleTV really just exists for the primary purpose of selling video downloads from the iTunes Store. There are a few US-based services available in addition to the iTunes Store, including Netflix, YouTube and Flickr, but the AppleTV simply ignores the vast majority of on-demand services that are widely available on the Internet – including key services such as the BBC iPlayer or LoveFilm here in the UK.

You can run apps for those services on an iPhone, iPod Touch or iPad and then stream them to the AppleTV using AirPlay – but the AppleTV really needs to works as a standalone device that can provide direct access to those services without requiring any expensive additional hardware.