We might have expected an SSD drive to be a little more compact, but the MiniStation Thunderbolt is still portable enough to carry around with a laptop. It’s reasonably priced for an SSD drive and its strong performance makes it a good back-up option for the latest MacBook models that come with their own SSD drives.

It’s good to see Buffalo producing more products specifically for the Mac. Back in January we reviewed its MiniStation Thunderbolt, which was a neat little hard drive equipped with both Thunderbolt and USB 3.0 interfaces.

This month they’ve come up with another version of the MiniStation that looks virtually identical and has the same set of interfaces – but which includes a solid-state drive (SSD) rather than a conventional hard drive. We tested the 128GB model, which costs about £200 if you shop around online, but there’s also a 256GB model available for around £300. Those are reasonable prices for an SSD drive, although LaCie’s Rugged drive remains the most affordable model that we’ve seen in recent months.

Like the original MiniStation, this new model has an attractive silver-grey case, finished off with a textured white top panel. Oddly, though, it’s fractionally larger than the HD version – the width and depth are the same at 80.5mm and 130mm, but this SSD model measures 23mm thick compared to 22.5mm for the HD model. Even so, it’s still small enough to slip into a backpack or briefcase with no trouble, and at just 260g you’ll barely notice the extra weight.

See: SSD vs Hard Drive: which is the best storage to have in a Mac

Our only complaint, as before, is that the status light positioned on the lower front edge of the unit isn’t always easy to see, especially as it strobes on and off quite slowly whilst transferring data. 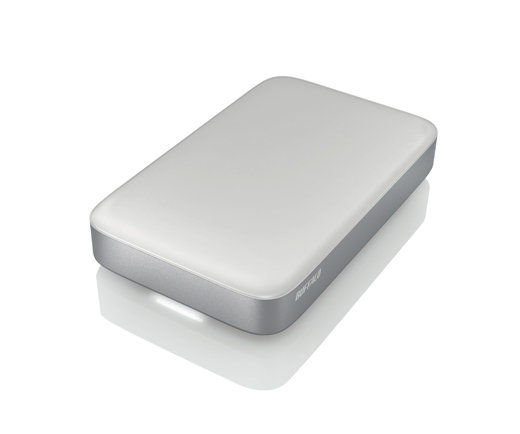 The MiniStation SSD is designed specifically for Macs.

The drive includes cables for both the Thunderbolt and USB 3.0 interfaces and comes pre-formatted in the Mac’s HFS+ format, so you can just plug it straight into your Mac and get down to work. There’s no bundled software supplied with the drive, but Buffalo does include a small leaflet explaining how to reformat it for use with Windows PCs.

Not surprisingly, the SSD drive in this model proved much faster than the HD version of the MiniStation. The HD model produced modest read and write speeds of about 40MB/s with its USB 3.0 interface, and 100MB/s with Thunderbolt – speeds that were consistent with both small document files and larger video files.

This SSD drive was much faster, although the results also varied quite a bit depending on the types of files we used. Smaller document files produced similar performance from both Thunderbolt and USB 3.0 interfaces, with read and write speeds of 294MB/s and 185MB/s.

Even so, those results are still consistent with most of the SSD drives that we’ve tested recently, and suggest that even SSD drives aren’t quite fast enough to fully exploit the potential speed of the Thunderbolt interface.