You don’t have to be a flight-sim buff to enjoy Storm Raiders, as it very much puts its emphasis on action and aerial warfare. The mix of single-player and multiplayer modes provide enough variety to keep you flying for weeks on end, and the game is a real bargain for just £2.99.

Some friends of mine were raving about the iOS version of Storm Raiders over Christmas, so when I heard that the game was also being released on the Mac I decided that it was time to check it out.

The main single-player campaign has two parts, allowing you to take earn your wings in the Battle of Britain or to head out into the Asia-Pacific War. Stick around for the Battle of Britain and you’ll start out by defending the Dover coast and the skies over Kent from the invading Luftwaffe, and then striking back by taking the fight into enemy territory. The Asia-Pacific campaign takes place in locations such as Pearl Harbour, and also includes missions where you’ll be attacking the Japanese fleet at sea as well as in the air.

Flight simulation games can be pretty tricky to get to grips with, but Storm Raiders does a good job of catering to casual players who are just looking for a bit of Top Gun shooting action. There’s a ‘casual controls’ option that helps to stabilize your plane during more tricky manoeuvres, and your radar can help during combat by automatically locking on to the nearest enemy. However, more experienced pilots who are looking for a real challenge can switch into ‘simulator’ mode, which provides more realistic movement and controls. 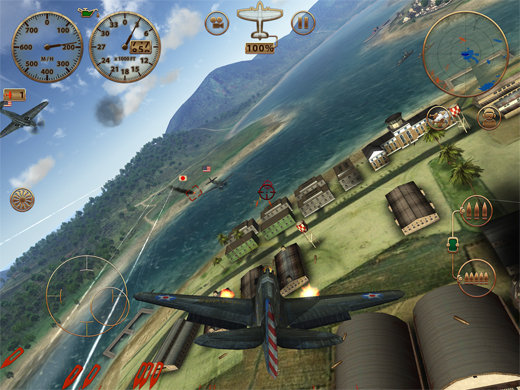 There are several different planes that you can choose for your missions, each with different weapons, speed and maneuverability. Machine-guns fire quickly and are easy to target, but don’t do a lot of damage, or you can opt for slower- moving rockets that do heavy damage but are harder to aim accurately.

You gain points for completing missions and downing enemy planes, and these allow you to unlock further planes and weapons systems so that you can customize your plane to suit your personal flying and fighting style. There are also a number of in-app purchases available that allow you purchase additional planes – so you might want to keep the kids away just in case they decide to go on a spending spree with your App Store account.

In addition to the main WWII campaign there are a number of other single-player options that you can try out, including dogfight missions against specific enemy planes, a survival mode where you have to withstand multiple waves of enemy fighters, and free-for-all where you just blast everything in sight.

There’s a good multiplayer mode too, which allows you to play against other Mac gamers online, or against friends with iOS devices on a local wifi network.