Owning an Apple router is a great option for those of us with multiple Apple devices (MacBooks, iPhones, and so on) and it’s an easier and smarter way to set-up and manage a network in the home or small office. There’s not much between an AirPort Express and AirPort Extreme, although it’s larger brother’s faster Ethernet connections and external hard drive support may be worth paying extra for.

Apple has a range of wireless networking options going under the AirPort moniker, and the AirPort Express Base Station is the entry-level model.

It’s an interesting device. It had a refresh last year and in terms of styling now looks somewhat like a white Apple TV. We like the new Apple TV-esque styling of the AirPort Express although one downside is that it no longer attaches directly to a wall socket like the old model. 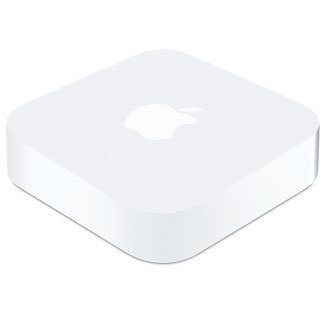 One of the really great things about the new AirPort Express is that it now includes the 802.11n simultaneous dual-band (2.4GHz and 5GHz) antenna previously only found in the AirPort Extreme. This is great because it enables you to set up both a 2.4GHz network (used by the iPhone and most older WiFi devices) and an additional faster 5GHz network, which you can use with newer MacBooks and iPads. Most routers only allow you the one type of network, which typically has to be set to 2.4GHz to prevent

And the number of devices that can be connected to an AirPort Express has now gone up from 10 to 50.

On the reverse are two Ethernet connections, an additional one from the previous model, sadly they remain 100base-T rather than being the more ubiquitous Gigabit connections found on other routers. If you’re on a Ethernet network the AirPort Express is a really good way to add WiFi to a wired network. 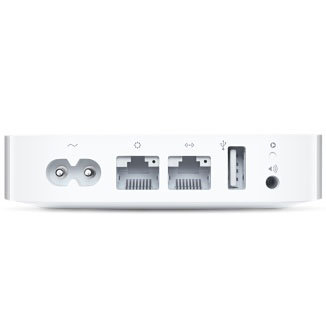 Another unique touch is the presence of a an audio output jack. This latter is a useful addition because it enables you to connect the AirPort Express to any stereo system with an auxiliary audio connection and stream music using AirPlay. This is the only Apple AirPort Base Station to feature the AirPlay audio jack.

The single USB socket enables you to connect the AirPort Express to a printer to create a wireless printer, although you can’t – sadly – connect an external hard drive for wireless storage (for that you need to upgrade to the AirPort Extreme or Time Capsule).

One final key advantage to working with a Apple-branded router is that it works with AirPort Utility, this is a great app for Mac OS X and iOS that can be used to set up, and manage wireless devices. It’s far more user friendly than the web-based interfaces you get on most routers, and you can manage wireless connections from an iPad or iPhone.