It’ll be interesting to see what new features – if any – Western Digital can add to the forthcoming WD TV Play, but even in its current form the WD TV Live is one of the few media players that can give the AppleTV any real competition.

There are two versions of the WD TV Live available at the moment – with a third on its way. The basic model reviewed here costs about £80 and, like the AppleTV, lacks an internal hard drive. However, there’s also a model called the WD TV Live Hub that costs £160 and includes a 1TB hard drive that can be shared with other people on your home network. Western Digital has also announced a new model called the WD TV Play – that doesn’t actually seem to add any new features, but simply looks more like the AppleTV.

That’s possibly because the current WD TV Live is quite a bit larger than the AppleTV, measuring about 125mm wide and lacking the minimalist elegance of its Apple rival. However, it’s very easy to set up and use, with a simple graphical interface that places all its main options in a Mac-like dock that runs along the bottom of your TV screen.

There are options for playing music, photos and videos stored on other devices on your network, as well as a ‘Services’ option that allows you to connect to a variety of online services. The WD TV Live currently supports the BBC iPlayer and Netflix, with good 1080p video output for streaming video, along with other services such as Spotify, FaceBook and YouTube. If they could just add LoveFilm and Sky too that’d give it a real edge over the AppleTV.

It’s definitely better than the AppleTV when it comes to handling your own personal collections of music, photos and videos. As well as playing files stored on your network, the WD TV Live has two USB ports that allow you to play media files from a memory stick or hard disk. The WD TV can also handle a much wider range of file formats than the AppleTV, including Windows AVI and WMV, MP4 and H.264, WAV audio, AAC, OGG, Dolby and DTS. 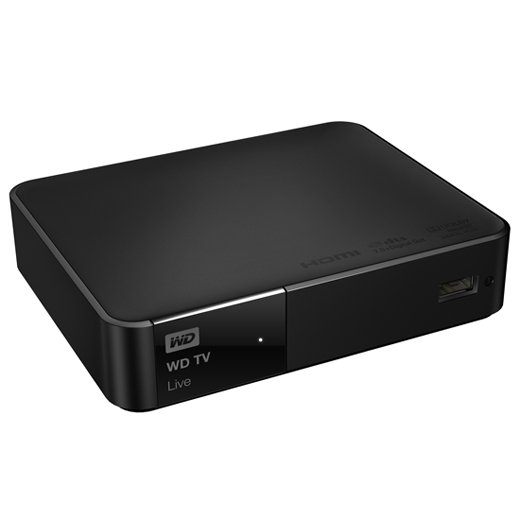