It is possible to run apps for some services on an iPhone, iPod Touch or iPad and then stream them to the AppleTV using AirPlay – but the AppleTV really needs to provide direct access to those services without requiring any expensive additional hardware. Until Apple is prepared to take the blinkers off and provide access to a wider variety of apps and services the AppleTV only has limited appeal for users outside the US.

Despite all the rumours about Apple launching an actual television of its own, the current AppleTV remains a rather unambitious little set-top box with only limited access to the many TV and streaming video services that are now available on the Internet.

To be fair, you can understand all those rumours when you look at the AppleTV’s graphical interface, which is far more straightforward and attractive than anything we’ve seen on any TV or other digital media device.

The third-generation version of the AppleTV introduced in 2012 did tweak that interface a bit, replacing the original text menus with large icons representing categories such as music, movies and TV programmes. That makes it easier to view when you’re sitting on a sofa some distance away from your TV screen, and the tiny little remote control included with the AppleTV is still an object lesson in simplicity and streamlined design.

As you’d expect, the AppleTV includes an HDMI interface with 1080p output for connecting it to your high-def TV, as well as built-in wifi for your home network. There’s no hard drive inside that tiny little box so you can’t download films or TV programmes for permanent storage, but you can download purchases onto a Mac or PC using iTunes and then stream them to the AppleTV using Apple’s AirPlay wireless technology. And, of course, AirPlay will also allow you to stream video from any iOS mobile device as well. 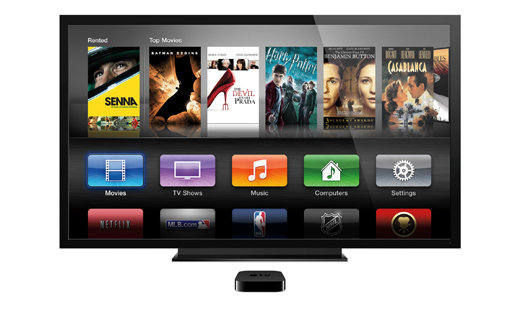 The problem with the AppleTV, though, is that it exists primarily to sell films and TV programmes off the iTunes Store. It does work with a handful of US-based services, such as Netflix, YouTube and Vimeo, but simply ignores everything else – including key services such as the BBC iPlayer or LoveFilm here in the UK.