Pangolin is a neat, clever little physics game for iPhone and iPad with bags of character. Just don’t expect too much depth: this is a commuter game par excellence.

Pangolin is a clever and attractive physics puzzle game for iPhone and iPad. Here’s our review.

Putting us in mind of that old Picasso line about great artists stealing, this physics action puzzler grabs bits of Angry Birds and Sonic The Hedgehog, mixes them up with a spot of crazy golf, and turns the whole thing into something brand new. The ingredients are familiar but the dish is utterly original.

You control a cute scaly mammal who rolls into a ball when threatened. At the start of each level he is bunted gently into the air, and you get a certain number of shots to propel him around the obstacles and to a target. But instead of carefully lining up your strokes, you have to do it all in real time, catching the little fellow on the volley before he loses crucial momentum.

And those ‘shots’ we mentioned? Actually, trampolines. We meant trampolines. You place these where needed by tapping two anchor points on the screen. The further apart your anchors, the bouncier the surface will be; you need to judge the position, angle and size perfectly to bounce the pangolin where you want him.

It’s a fun, clever gameplay mechanic, and while fiddly at first it soon becomes second nature. You’ll be picking off gems at long range in no time (in fine Cut The Rope tradition, each level has three gems to collect, as well as Sonic-esque gold coins). And if you mess up you can simply start the level again by swiping to one side. This sort of gesture-based restart needs to become industry standard for physics puzzles games: nobody can be bothered going through a mini-menu when they just want to line up a trajectory slightly differently. 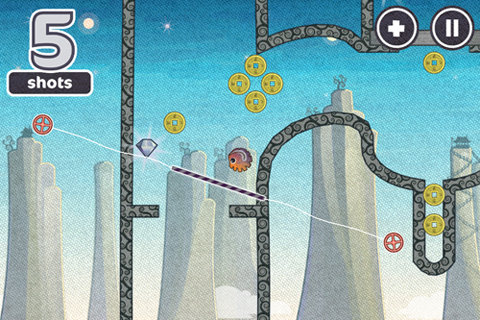 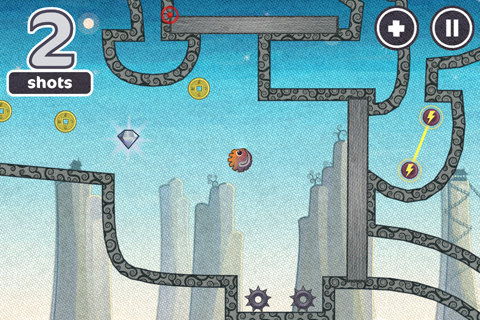 The presentation of the game is spot on, from the textured backdrop (which looks like it’s been painted on a piece of denim) to the soundtrack. Only the flat, weirdly incongruous ‘You died’ message when you land on spikes mars the child-friendly feel. Come on, guys. This calls for a ‘Yowch!’, surely?

There are 50 levels at present; the iPhone version gives you the first 10 for free and then asks 69p for the rest. We call that a bargain. (The iPad edition, Pangolin HD, includes them all in its initial £1.49 outlay.) Getting all the gems will last you a fair old while, although it’s probably more suited to 20-minute commuting sessions than all-nighters: pleasant and mildly addictive as it is, Pangolin isn’t a deep game. 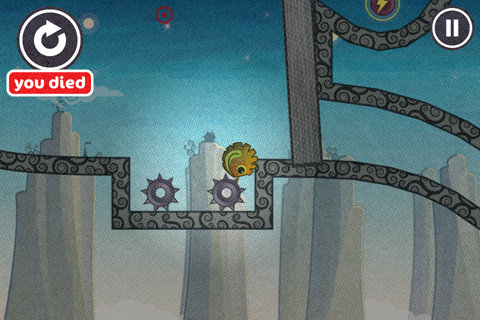 Our only other quibble is that we saw some stutters when testing on an older iPhone 4, mainly when re-acquiring a 3G connection (coming out of a train tunnel, for example). And a stutter in Pangolin is fatal, since rather than simply pausing the action it actually kills your momentum and spoils whatever shot you were going for. This can be frustrating. We didn’t see any stutters on an iPhone 5, however.

We contacted the developers to ask about this issue and they said they are working on a fix, and that it’s top of the list of tweaks. They are optimistic that this will “allow these performance dips to happen without affecting the physics”.

For the time being, then, our recommendation must be slightly more reserved for those on older models of iPhone, although it was only an occasional problem, and certainly didn’t put us off the game overall.