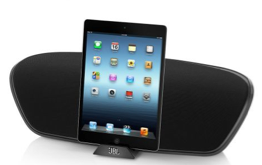 We liked the JBL OnBeat Venue LT but preferred the sound when our iPhone was docked to the sound via Bluetooth. However, the MusicFlow app combines with Bluetooth to give you remote controlled access to all your music from the other side of the room, which is a bonus. 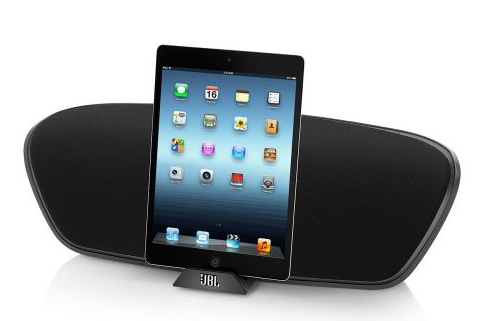 The JBL OnBeat Venue LT (the LT stands for Lightning) was one of the first speakers to sport Apple’s new 8-pin Lightning dock. There are quite a few more on the market now including the JBL OnBeat Micro Portable Speaker Dock, BOSE SoundDock Series III, Philips Lifestyle Music System, iLuv Aud 5 and Soundfreaq Sound Step, to name a few.

If you are wondering where the dock is hidden, you access it by pushing in the drawer at the front with the JBL logo on it. JBL recommends disabling Shake to Shuffle before docking (we’re not sure why, the dock seems quite stable). The dock also charges the device.

You don’t have to use the dock; there are two other options for playing music. Tap the source button to cycle through the sources. You have the alternative options of Bluetooth and AUX – there is no cable supplied for this, but it does mean you can use it with devices that don’t have the Lightning connection. The LED will illuminate the option selected. 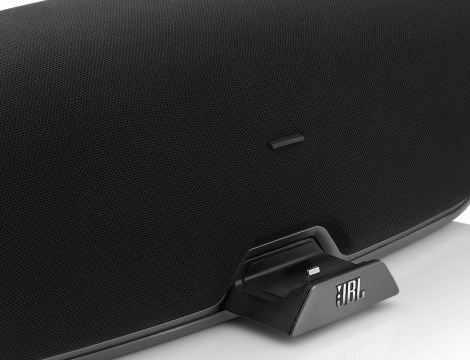 As with any music playback via Bluetooth you will experience a drop in clarity and detail compared to the physical connection. JBL claims that its HARMAN TrueStream technology “guarantees the best possible wireless performance”, however. In our tests we did notice that the best sound came from the direct connection, but the Bluetooth playback was more than satisfactory. Be aware that a number of devices around the home can interfere with Bluetooth performance, for example microwave ovens operate in the same spectrum so it’s worth keeping that in mind if you plan to use the speakers in the kitchen.

We have to admit, we’d prefer an AirPlay option to the Bluetooth. JBL does offer the JBL SoundFly Air with this feature for £159.99.

There is no remote control in the box, but JBL does provide a free app called MusicFlow on the App Store. MusicFlow lets you create playlists from the music stored on your device. We found that not all of the music on our iPhone 5 was available in the MusicFlow app however, nor were all our playlists. We also found that some tracks that were in iCloud appeared to be present in MusicFlow, but hadn’t actually been downloaded and therefore wouldn’t play.

The app does offer some additional features that make it worth using however. For example, there are additional equalizer settings available from the app. These include Movie, Rock, Jazz, Basic and Gaming. On the device itself the Movie setting is available along with a Base Boost Button for enhanced base. The Movie button activates a Movie EQ mode for extra-wide sound; JBL suggests you might use this for movies. In practice we liked the increased depth to the music we played with this feature enabled. Base Boost increased the base as you would expect. In the case of some particularly base-heavy tracks we thought the base became a bit distorted. 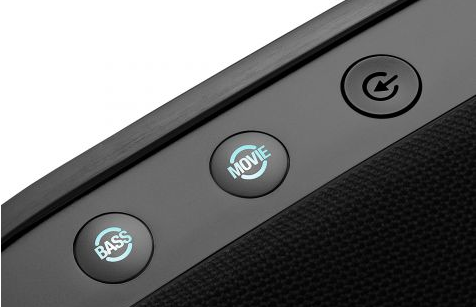 There are volume up/down buttons on the device or you can use the remote app and swipe up and down on the screen. To mute the sound you can press both buttons on the OnBeat Venue LT simultaneously, press them again to unmute it.

JBL claims that the OnBeat Venue LT offers 30 watts of amplification, there are four transducers (two low-frequency and two high-frequency). The unit is compact and light.

A quick glance on the JBL website suggests that some early users of the JBL OnBeat Venue LT experienced some audio interruption, JBL claims this was caused by third party apps and a firmware update is available that can be installed.

We liked the JBL OnBeat Venue LT but preferred the sound when our iPhone was docked to the sound via Bluetooth. However, the MusicFlow app combines with Bluetooth to give you remote controlled access to all your music from the other side of the room, which is a bonus.