As you’d expect from Blizzard , everything about Heart Of The Swarm is immensely polished and enjoyable. It’s a complex strategy game that will require plenty of time and patience – and a permanent Internet connection even for the single player game – but if you enjoyed StarCraft II then you won’t want to miss Heart Of The Swarm.

No one could ever accuse Blizzard of rushing their games onto the market before they’re ready. They took more than a decade to finish off Diablo III, and it’s taken almost three years just to release this expansion pack for StarCraft II. But, as always, Blizzard earns big brownie points for releasing the Mac version right alongside the PC version, which means that Mac users can get in on the action right from day one.

It’s also a bit unfair to describe Heart Of The Swarm as a mere ‘expansion pack’, when it’s really the next chapter in the StarCraft saga. StarCraft II focused on humanity’s role in the three-way intergalactic fight-fest between mankind and the alien races of the Zerg and Protoss, but Heart Of The Swarm continues that story and introduces new elements by switching its focus onto the insectoid Zerg Swarm.

Conveniently, though, the Zerg have a human face in the form of Sarah Kerrigan, a woman with powerful telepathic abilities who had previously been captured and absorbed into the Zerg’s hive mind. Kerrigan was freed from Zerg control at the end of StarCraft II, but Heart Of The Swarm sees her getting back together with her Zerg swarm-buddies and going on the rampage once more.

The core of the game is a series of 20 new missions in which – playing as Kerrigan – you take control of the Zerg forces. It’s fun to command the alien Zerg for a change, with military units such as the flying Vipers and the lumbering Hosts, and there are also new units introduced here that you won’t have seen before. As well as conducting research that provides you with new weapons and technology upgrades you can also embark on special missions that allow you to control the evolution of the Zerg species, perhaps mutating little Zerglings into winged monsters that you can unleash on your enemies. 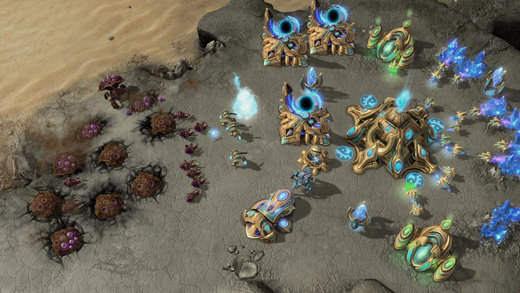 Kerrigan herself can gain new powers too, leveling up like a character in a role-playing game. At lower levels she can enhance her telepathic abilities with skills such as a kinetic-blast, and as she rises to Level 60 she can create new, more powerful Zerg units, such as the mighty Leviathan motherships.

Heart Of The Swarm also extends StarCraft’s enormously popular multiplayer mode with no less than 26 new multiplayer maps. And if you feel a bit daunted by the idea of playing online there’s a training mode that pits you against computer-controlled opponents so that you can get used to the faster-paced online game. That should be more than enough to keep you busy for the next few years while Blizzard works on the final chapter of the StarCraft saga that will focus on the mysterious Protoss.