While the Booqpad Mini from Booq does detract from the iPad mini and its sleek, refined unibody, it’s a good compromise and quality option for those who want to protect their significant investment, especially on your travels. On balance, the inclusion of a paper notepad is likely a plus, while the centre slot for pen/stylus resolves one issue securely.

Available in leatherette or natural fibre Jute, the Booqpad Mini for iPad mini is a stylish and business–like case, that should particularly appeal to anyone wanting to protect Apple’s diminutive tablet on the move. While it distracts a little from the mini’s slimline design it’s still fairly compact and includes space for pen or stylus, possibly both in one combo, business cards and an actual paper notepad. That notepad includes 50 pages and replacements are available directly from Booq, although these cost £8 for a packet of three. That seems ridiculously expensive, but you should, despite the unusual size, be able to root around your local discount store to find a suitable and cheaper replacement. The inclusion of a notepad will likely divide users into two groups, those will find the ability to jot down notes traditionally useful and those who will likely use an app. 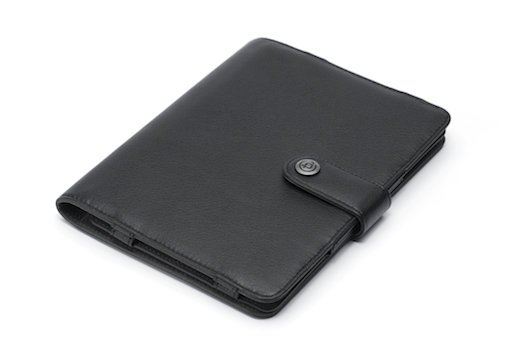 Looks wise, the Booqpad Mini resembles a Filofax personal organiser, which while a little retro looking is no bad thing. For stylus users having somewhere secure to store your pen is a positive, although it would have been good if Booq had included one as standard. Like the larger Booq Folio for iPad reviewed last year, the Booqpad Mini looks and feels like a quality case, the choice of finishes matched by a lush Nubuck lining to ensure your iPad remains scratch free. Your iPad mini can be easily docked and charged while in the case, although Booq haven’t yet found a way to successfully punch a hole in the case for Apple’s iSight Camera, which rather limits taking spontaneous snaps. The Booqpad Mini also lacks any ability to turn the case into an iPad mini stand, although can be used as padded rest when lying the tablet flat on a table top or similar. 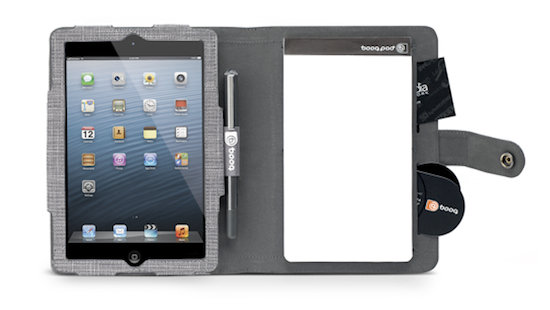