NanoStudio is a bargain even at £9.99, so having it for free on your desktop is amazing. In terms of functionality, it’s pitched somewhere between the synth emulation power of Propellerhead’s Reason and GarageBand’s limited simplicity.

NanoStudio is best known as a Digital Audio Workstation or DAW for iPad and iPhone. The iOS version costs £9.99 – the OS X version is free. For that princely sum you get most, but not all of the functionality of the mobile music studio.

The heart of the software is a multitrack sequencer, labeled “Song”,  divided into tracks much like Apple’s GarageBand. You can assign one of two instrument types to each track – either an a synthesizer or drum machine. The built Eden synthesizer is NanoStudio’s secret weapon, preprogrammed with 128 presets from installation and with two banks free to add more (including a dedicated Project bank).

While GarageBand hides its synthesizer capability under a layer of interface obfuscation, the Eden synth is very much a tool for enthusiasts. With 2 oscillators, 36 basic waveforms and 3 ADSR envelopes among the configurable settings, you can squeeze a huge array of sounds out of the Eden. If you’re more of a plug and play musician you can visit NanoStudio’s website to find links to community created instrument patches.

The TRG-16 drum machine gives you slots to load or record samples to – with 11 slots already occupied. Of course, those samples don’t have to be drums – you can use the pad to trigger sound effects too. 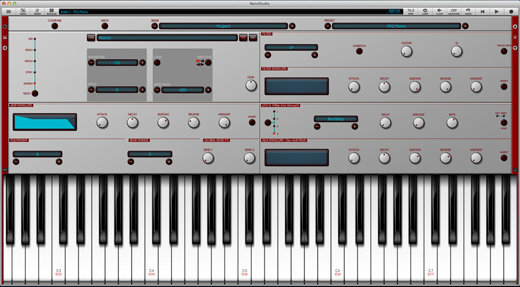 NanoStudio is an all in one recording studio with generative synthesizer capabilities and outstanding mixing features.

Back to the song view, at track 0 of 16, there’s a mixer, modeled on hardware and one of the most welcome sections of NanoStudio. We’ve lost count of the number of times we’ve raised our fists to the skies and wished that GarageBand had something similar. In vain, of course, because Apple would prefer that you upgraded to Logic.

The mixer offers up two send channels as well as those assigned to tracks in the song view. These can be used to gang channels together (for universal reverb, for example) and for effects you might use at mastering stage. The software’s bundled with several. including EQ and compressor, flange, chorus and delay.

To say that NanoStudio is the work of one person, user experience concerns have been remarkably well dealt with. It’s cleanly and neatly designed, has a clear workflow and doesn’t compromise on features for the sake of usability. If there are problems, and there always are, they are niggling rather than terminal. Things like the lack of an integrated instrument bank editor. It’s tiresome scrolling through instruments trying to find just the right sound.

Our final niggle is a feature, not a bug. NanoStudio may be a little off-putting for people new to sequencing. There are lots of assumptions made about what the user should already know. Fortunately, good supporting documentation and a dedicated community (accessible through NanoStudio’s website) mean that the software’s easy enough to learn for those wishing to persevere.