The Wireless Plus is quite expensive, at £150, but the ability to use it as both a USB drive with your Mac and as a wifi drive with your iOS devices means that it’s a lot more versatile than an ordinary hard drive. It’ll be worth the price if you have a large collection of music, photos and videos that you can’t squeeze onto the limited storage in your iPhone or iPad.

Seagate’s Satellite drive was one of the first wireless hard drives designed for use with mobile devices such as the iPhone and iPad. Its new Wireless Plus provides similar wifi connectivity, but can also be used as an ordinary USB drive too.

The Wireless Plus looks like a conventional hard drive, with a smart, dark-grey brushed metal finish. It’s a little chunky for a portable drive, measuring about 127mm long, 90mm wide and 20mm thick, but it’s still small and light enough to slip into a jacket pocket or a carrying case when you’re on the move.

The drive provides 1TB of storage and can be used as an ordinary USB drive simply by plugging in the USB adaptor that Seagate includes in the box. The Wireless Plus is formatted in the Windows NTFS format, but Seagate includes NTFS software for Macs so that you can copy all your files onto it without having to reformat the drive.

Alternatively, you can just press the ‘Broadcast’ button on the side of the drive in order to turn on its built-in wifi. When you do this the Wireless Plus acts like a wifi router, creating its own network so that you can connect to it from any Mac, PC or mobile device that also has its own wifi. 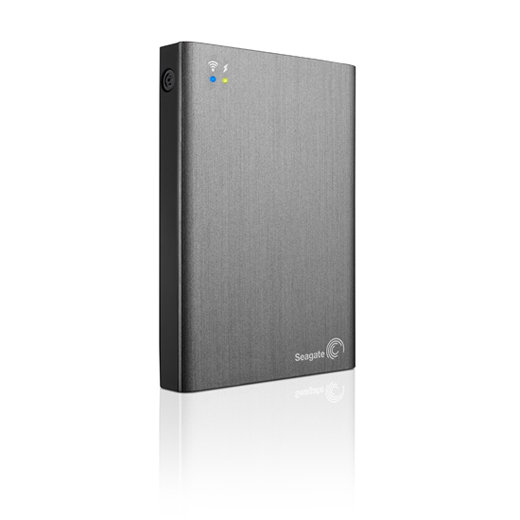 Macs and PCs that connect to the Wireless Plus can use their web browser to view files stored on the drive, while iOS and Android devices can use the Seagate Media app. This app works well and is easy to use, and it only took us a few seconds to install the app and start streaming some of the sample video files that were included on the Wireless Plus.

The battery in the Wireless Plus lasts for up to 10 hours when fully charged, so you can leave it on a desk at home or in your office and use it with your mobile devices as you move around. When you need to charge the battery you can just plug the Wireless Plus into a USB port on a Mac or PC once more. This disables the wifi so that the Wireless Plus then just acts like an ordinary USB drive, but Seagate also includes an adaptor so that you can charge the drive from the mains and keep the wifi connectivity running at the same time.