All Star Racing isn’t a particularly difficult or challenging game so it will probably only appeal to very young players. However, it’s reasonably priced and its multiplayer modes and support for Game Centre add a social element that will help to keep the kids amused on a rainy Sunday afternoon. 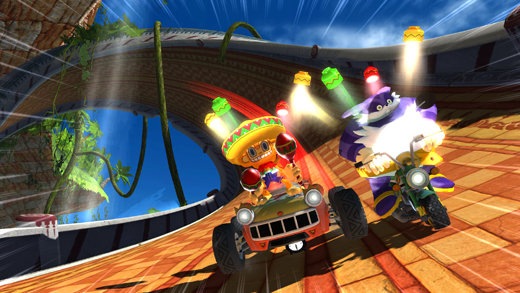 You can play as Sonic and many other well-known Sega characters.

Someone at Feral must be really into racing games, as this is their third racer in as many months, following on from Grid and F1 2012 recently. But, of course, Sonic & Sega All Stars Racing is aimed at a younger audience who probably aren’t too worried about the realistic driving controls and real-world race-tracks of those other games.

You can choose to play as any of a wide range of Sega characters, including Sonic himself, as well as his arch-enemy Doctor Eggman, or even characters such as cool-dude Ryo Hazuki from the Shenmue game series. Each character has their own set of wheels too, so you can opt for Ryo’s fork-lift truck if you don’t like the cutesy vehicles driven by Sonic and his crowd of cartoon friends.

The choice of vehicle seems to be largely cosmetic though, and the driving side of things is actually pretty simple. All you can really do is just steer left or right, accelerate, or use the ‘drift’ control to help with some high-speed turns. There’s no brake, and you can’t wreck your vehicle either – crashing into obstacles just slows you down a bit, or sends you careening around the track like a ball trapped in an oversized pinball machine. Even driving over the edge of a cliff just causes the Sega logo to flash onto the screen and then returns you to the track completely unharmed.

The fact that there’s no real penalty for bad driving means that adults and older children won’t find the game much of a challenge, but there are enough colourful twists to keep younger players happy. There are four main types of single-player races – including a four-stage Grand Prix, time trials, and missions that set you a specific challenge – and as you hurtle around each candy-coloured track you can pick up bonuses such as super-speed, a rocket-launcher that you can fire at your opponents, and mines that you can drop as another driver approaches from behind. In fact, learning how to use these weapons properly is probably trickier than the driving side of things.

All Stars Racing also provides a number of different options for multiplayer games. If you’ve got a spare keyboard available then two people can play in split-screen mode on the same Mac. Up to eight people with their own Macs can play on your home network, or you can log-in to Apple’s Game Centre and play with up to three other people online.

And while some of Feral’s games have pretty high system requirements, All Stars Racing has a handy ‘low detail’ mode that allows it to run smoothly even on quite old machines. It is, however, the first game we’ve come across that requires Mountain Lion (OS X 1.8.3) to run, and we weren’t even able to download it from the App Store onto an iMac that was still running Lion (10.7.5).