The HyperDrive iUSBport is billed impressively as the USB port that should have been on your iPad, iPhone and Android device, and it clearly has appeal and potential for those lacking space on their mobile devices. It’s also a convenient way to view and copy content without converting files and syncing and thanks to its diminutive size it also makes a useful companion for your portable hard drive, particularly on your travels.

Previously known as CloudFTP, this neat pocket sized device started life as a successful campaign on Kickstarter, the donation funded platform for creative projects. Rebadged as iUSBport it’s essentially, for now at least, the same product available directly via Sanho and Amazon in the UK. The battery powered device promises to make any USB based storage device wirelessly accessible to any Wi-fi compatible device, including Apple and Android devices. Essentially it creates a dedicated and free Wi-fi network for streaming and copying content to your device, without the need of an additional power supply, cables or iTunes sync. While set-up is fairly simple, the process would clearly benefit from a more substantial manual, an issue that is also raised by Amazon customers.

Powered by a 2600mAh li-ion rechargeable battery it will run for up to five hours on a single charge, which falls some way short of the current iPad, which offers between nine and ten hours of battery life. That said, it’s enough time to domost things, including watching a couple of HD quality films back to back. Once powered, the iUSBport has a small LCD panel for indicating when a wireless connection is made, which we’ve found over time to be a fairly speedy process. Of those USB devices we have tried, accessing data on your iPad is pretty much instant and universal, especially via your web browser, with the ability to watch video content without lag or dropouts. 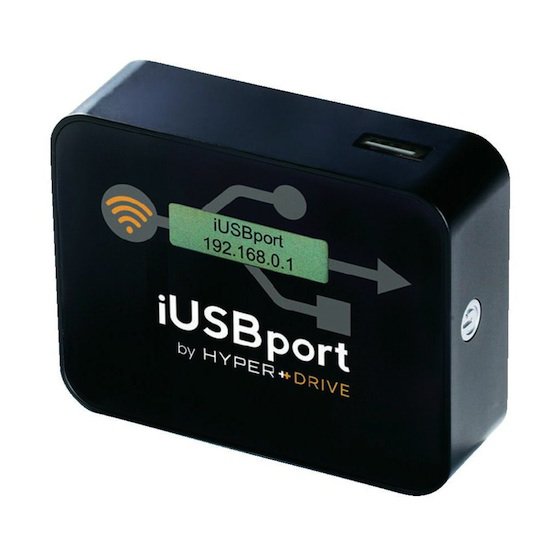 Sanho note films can be shared on up to three devices, music streamed and photos viewed on up to eight devices, while files/documents can be shared on up to eight devices. As well as accessing files by your web browser, the makers offer a dedicated free app in iUSBport for iPad users, which now works with the recently launched iUSBportCAMERA. With a bare bones user interface, it’s functional at best and feedback on various retail sites suggests third party file transfer apps work as well, if not better, and include support for iPhone and iPod touch.

While the device comes with a USB cable, there’s no external plug into the mains type charger included in the box, which is a pity considering the relatively premium price. The only other quibble is that the pace of change suggests iUSBport 2 is likely just around the corner, with hopefully an improved battery life and build quality, so you may be tempted to wait for the newer model. Additionally, since that Kickstarter launch, Apple now offer a higher capacity tablet – iPad with Retina display – with 128 GB of storage for £639, which while expensive does go some way to address the issue of lack of storage space.