Armed with an iPad, the iUSBportCAMERA is a useful, yet not essential, addition to a photographer’s Canon or Nikon tool kit, although it still shows great potential and will likely improve with revisions. The ability to view images on the larger iPad screen is also a plus, one that should make creative decision making easier and speed workflow.

Sanho specialise in portable power and storage, with an impressive portfolio of solutions for extending battery life and sharing files across devices. iUSBportCAMERA, under Sanho’s HyperDrive brand, is a relatively new addition to that portfolio, aimed, as the name suggests, at photographers. Compatible with a range of Canon/Nikon DSLR cameras, it promises the ability to turn your iPad, iPhone, Android device, Mac or PC into an advanced remote control, while significantly improving on your camera’s LCD display when you want to view your images in more detail while shooting or even editing photos and video. However, currently the main option for doing this is Sanho’s free iUSBport app, a companion to the HyperDrive iUSBport, which is designed for iPad only. While you can access files via Safari and Chrome web browsers on other devices, you won’t get the full experience without an iPad, something which Sanho need to address sooner that later. 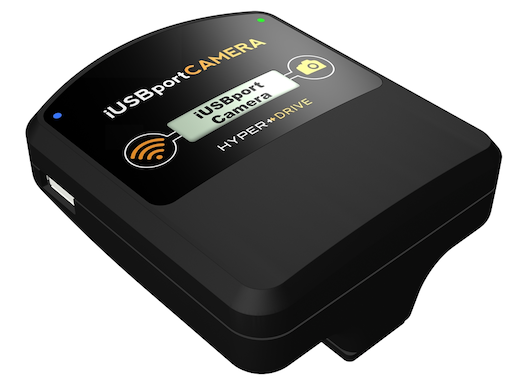 At 84 x 72 x 37mm or 3.31-inch x 2.83-inch x 1.46-inch, the iUSBportCAMERA is fairly compact and lightweight, weighing in at just 3.14 ounces/89 grams, although we feel size will still be an issue for some. While plastic, it appears sturdy with a nicely tactile texture, similar to that found on many DSLRs. It connects to your camera via USB and hot shoe or standard tripod mount, so you’ll need a hot shoe extension bar if shooting with flash or with a trigger. The unit comes with a built-in rechargeable battery that should see you well for up to eight hours, although a mains adaptor isn’t included. Unfortunately, the unit can take up to seven hours to fully charge, which means plenty of downtime has to be found between shoots. Once powered, iUSBportCAMERA creates its own ad hoc Wi-fi hotspot with a range of up to 300 feet, which you can easily find on your tablet, phone or laptop. Additionally, you remain online by connecting the device to an existing Wi-fi network, using the oddly named ‘Infrastructure Mode.’ 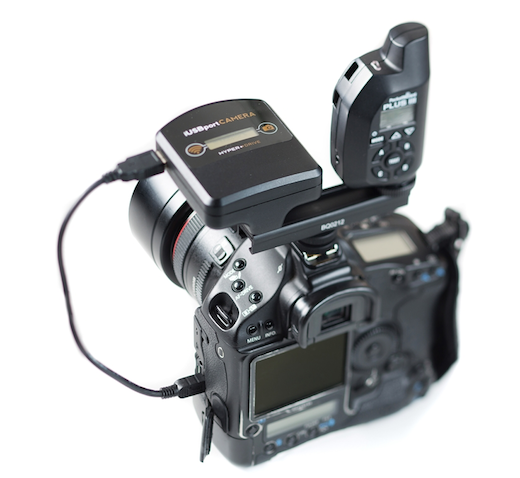 Within a simple and intuitive interface the iUSBport app offers a fair amount of control over your camera including the ability to change ISO settings, aperture, shutter speed, and white balance along with the chance to refocus and view histogram information. Sanho notes the device supports Adobe software, so you can potentially edit as well as view images. We hope Sanho will extend the range of compatible cameras, including both additional Canon and Nikon models, along with a wider range of brands, which would clearly widen the iUSBportCAMERA’s appeal. The lack of dedicated Mac, Windows and Android apps is also an issue that needs to be addressed, although there are reportedly third party apps available to Android users. It’s also clear from user comments on the iTunes App Store that Sanho’s iUSBport app needs improving, particularly gaining greater control, to fully impress.