Apple hasn’t changed the exterior of the MacBook Air, and that’s no bad thing because we’re all rather in love with its lightweight, stylishly slim looks. The real story is in the extended battery life, which laptop users are going to love. It might even lure back a few iPad users, too. Storage is increased in both size and performance, and the addition of 802.11ac wi-fi is another huge step forward. Your choice of which MacBook Air comes down to screen size. If you want ultimate portability in a laptop rather than an iPad the 11-inch Air is light enough for you not to notice in your hand luggage. The 13-inch offers that extra screen space if you don’t mind the larger body and increased weight (0.27kg difference). Then it’s down to storage and memory. If you can afford it upgrade now rather than regret it later.

Inside is where Apple has been busy – swapping Intel Ivy Bridge chips for the new, fourth-generation Intel Core Haswell processor.

The promise of battery life that will last a full working day is going to be the saving of the laptop – under intense threat from Apple’s own iPad tablet.

From the outside the new MacBook Air hasn’t changed much from the previous model. It’s still the same super-slim, lightweight, stylish laptop in a cool wedge of aluminium.

As before, the MacBook Air comes in 11-inch (actually 11.6-inch) and 13-inch (13.3-inch) models. With 128GB and 256GB storage options there are four Airs to choose from, and there are several upgrade options on configuration. We tested the base models of each (i5 processor; 4GB RAM; 128GB flash storage) and ultimate models (i7 processor; 8GB RAM; 512GB storage). 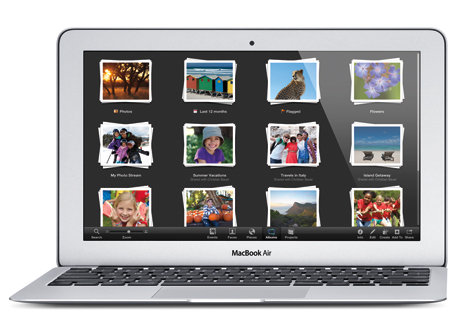 The entry-level 11-inch MacBook Air starts at £849 (inc VAT) with a 128GB SSD. An SSD is a Solid State Drive – flash storage that is much faster than old-style whirring hard drives. More on these later.

Previously the cheapest MacBook Air shipped with a meager 64GB drive so this new Air represents a big plus in storage. 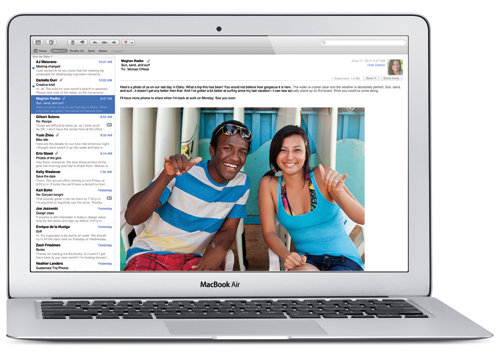 Choosing the best MacBook Air for you will come down to screen size vs portability. Get yourself down to an Apple Store or local reseller to see if you can live with the smaller screen. You might decide the 13-inch Air offers more valuable screen space for that 0.27kg weight difference.

As you’ll read below speed differences are minimal so Apple has made it a fairly easy choice when picking out the right Mac laptop for you. 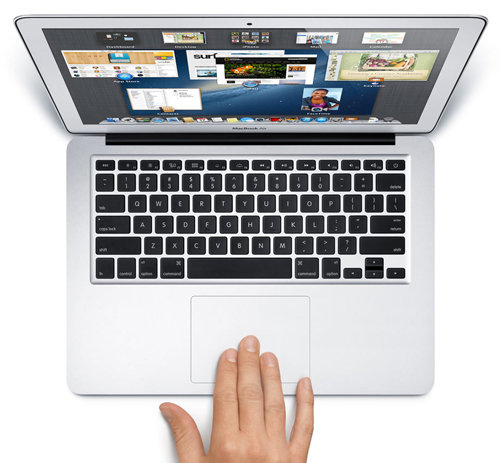 Even the 11-inch Air features a full-size, backlit keyboard, and both have the wonderful, large multi-touch trackpad.

The LED screens on the Air are unchanged from the previous models. They aren’t Retina Displays like you get with the MacBook Pro, so the pixel density is lower but that doesn’t make them inferior to the vast majority of laptop screens.  The 11-inch Air supports a native 1,366-x-768 resolution. The 13-inch Air has a native 1,440-x-900 screen resolution.

All models boast the onboard 720p FaceTime HD camera.

Both Airs have two USB 3.0 slots and one Thunderbolt. The 13-inch model also has an SDXC card slot.

As with all MacBook Airs – and all new Mac computers – there’s no DVD drive, so you may want to invest in an separate Apple USB SuperDrive for £65.

There is one tiny external difference between the 2012 and 2013 MacBook Airs. The 2013 Air now has two microphones, compared to one previously. This second mic helps with noise cancellation and so improves audio quality.

All MacBook Air models run on the 1.3GHz dual-core Intel Core i5 processor, with Turbo Boost up to 2.6GHz.

Hyper-Threading is supported on the i5 processors, allowing multi-threaded applications to address four virtual processing cores on these dual core systems.

4GB of 1600MHz LPDDR memory is standard on all models. You can boost this to 8GB for an extra £80. While 4GB might be enough for most, if you can affrod the extra then doing so on purchase is wise as you can’t do it later – the memory is not user upgradeable.

Because so much of the engine is the same there’s little to differentiate the new models in terms of overall performance.

We tested the base i5 (fitted with 4GB of RAM, and 128GB flash storage) and i7 (further upgraded to 8GB RAM, and storage increased to 512GB) MacBook Airs using Macworld Lab’s Speedmark 8 benchmarks.

We also tested the Configure-To-Order (CTO) MacBook Air models packing the i7 processor and 8GB of RAM – compared to the standard i5 processor and 4GB of RAM. As expected the 11-inch and 13-inch i7 models scored almost the same – the 11-inch is very marginally faster but nothing noticeable.

The CTO 13-inch MacBook Air is 23 percent faster overall than the stock 13-inch model. The CTO Air was faster in every test, with 24 percent faster times in our Handbrake, Aperture and file decompression tests.

Both the CTO 11- and 13-inch MacBook Air models are 8 percent faster overall than the 2013 13-inch Retina MacBook Pro, again due to the MacBook Air’s faster graphics and flash storage. (The Retina MacBook Pro was faster in a number of tests, including Handbrake, Cinebench CPU, iMovie import and iMovie export tests.)

All laptop owners would say that they don’t get enough battery life out of their portable. With the new MacBook Air Apple has aimed its sights on this very problem.

And with the Configure-To-Order Ultimate MacBook Air models:

Macworld Lab (testing by James Galbraith and Jeff Sandstoe) doesn’t quite replicate Apple’s battery life claims, and we can’t accurately verify them as the company doesn’t specify the criteria of its own testing. Apple states “wireless web” and “iTunes movie playback” when qualifying its battery life numbers.

In both tests we set the brightness to maximum and made sure that automatic brightness adjustment was off, backlit keyboards were off, and Screen Saver was set to never start.

It’s clear, however, that the new MacBook Air’s battery life is bigger and much, much better than before.

In the first test we looped a movie clip in full-screen mode with Wi-Fi disabled. The new 11-inch MacBook Air lasted 6 hours and 6 minutes, compared to just 3 hours and 34 minutes for the 2012 model.

Battery tests are difficult to replicate exactly. In contrast to the Macworld Lab results PC Advisor tested the new MacBook Air models battery life and surpassed Apple’s claims. The runtime in its MobileMark 2007 Productivity Test was actually 837 minutes, which is 13 hours and 57 minutes.

The new MacBook Air is designed for power savings, and boasts more energy-efficient Intel Core i5 and Core i7 CPUs. These chips have a slower clock speed to save energy, but can still deliver 40 per cent faster graphics performance, claims Apple. And our speed tests prove that there’s no overall loss in performance.

Apple has enhanced the Air’s low-power settings, too. The new MacBook Air can be left on standby for up to 30 days, and Apple says it will still wake up in one second – fast enough for even the most impatient road warrior. 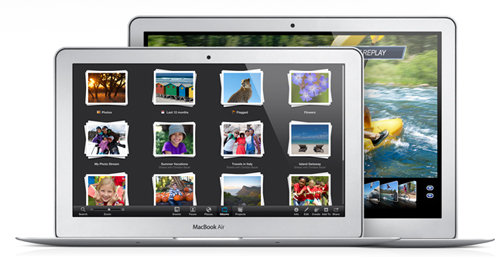 The larger, faster flash storage in the new MacBook Air transferred 6GB of files and folders 51 percent faster than last year’s Air. Macworld Lab ran Black Magic’s Disk Speed Test on the two systems and found the read speeds for the new 11-inch model were 667.7MBps, versus 141.1MBps on the older 11-inch Air’s 64GB of flash storage. Write speeds on the new 11-inch model hit 726.8 MBps, compared to 393.7 MBps on the 2012 Air.

The new MacBook Air models are compatible with the latest 802.11ac wireless networking, which is said to be three times faster than previous standards.