There are plenty of apps that cover the subject of the periodic table, but none have the panache, great design or addictiveness of the Elements. In iPad terms, this one is a real page-turner and well worth its asking price even if you don’t have to mug up for an exam. 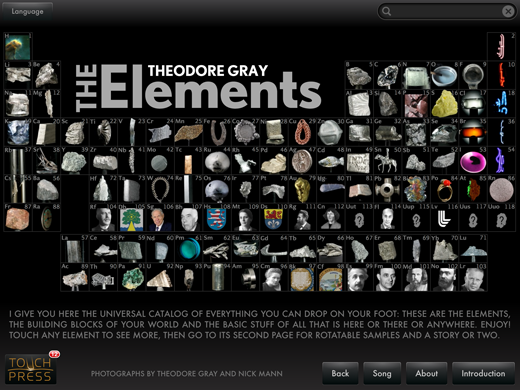 The Elements: A Visual Exploration isn’t exactly a new app. It was launched at the end of 2010 and immediately set the standard for others to follow as far as education focussed iPad ebooks are concerned.

In iPad terms a lot of time has passed since The Elements launched, but it remains a leader among ebooks. It looks as beautifully presented as it did at launch, and of course it has evolved over time. The most recent updates include upgrading all the graphics samples to high resolution objects that can be rotated and zoomed with twists and flicks of the fingers. They look simply stunning.

You can even take a look at elements in 3D. The main screen for each element shows a graphic of the element itself an key information about it. Tap the element as it rotates on screen and it grows, filling the screen while the other surrounding information disappears. Now you can generate a double image that can be viewed through 3D glasses. Some people can get the 3D effect to work without glasses. There’s on screen help which explains how.

Of course not every elements can be seen. Some of these are represeted by floating heads of those after whom they are named – Copernicium and Einsteinium for example, or by other symbols such as Livermorium and Ununtrium. These aren’t twistable and don’t get the 3D treatment, which is a pity.

The app starts with the famous song written in 1959 by Harvard mathemetician Tom Lehrer. If you don’t know it, it’s names all the elements known at that time. As Lehrer names the elements graphics of them appear on screen and drop into their rightful place on the periodic table that forms the background to the song. By the end of the song there are some post 1959 elements to add – this is quickly done as the finishing flourish. You can run the song as often as you like. Heck you might even want to try to learn it. More likely, though, you will want to get stuck right into the app.

The Elements isn’t just about easy to master interactivity and gorgeous visuals though. Each element has associated text which presents information a student needs to know in an accessible and readable form that’s not without humour.

Take Protactinium. Atomic number 91 in case you are interested. It has a half life long enough “that a lump large enough to see, while dangerous, would be entirely practical to show off in a nice lead-lined display case. This makes its unavailability all the more frustrating.” Or Tungsten (atomic number 74), “overwhelmingly associated with one application, the tragically inefficient incandescent lightbulb.”

If you want to play that game of finding out which element hs the highest melting point, lowest density, greatest atomic weight, and more, then you can tap the characteristic of any element to see it listed against all the others. Scroll the list and you can tap any element to jump right to it.

The Elements is a big app. It’ll eat 1.72GB of storage space on your device and you may well have to do some housekeeping to make room for it. Don’t dither about that, just do it. This app really is worth it.