The Time Capsule is expensive, and the lack of an ADSL modem is a long-standing complaint. However, networking products can still be very confusing for many people and the Time Capsule’s ease of use, along with the impressive performance of 802.11ac WiFi, makes it one of the best network storage devices currently available for Mac users.

The 802.11ac wifi standard hasn’t yet been officially ratified by the IEEE – the  organization that oversees international technical standards – but quite a few manufacturers have already incorporated this new technology into their wireless routers, so it wasn’t particularly surprising when Apple announced new 802.11ac versions of the AirPort Extreme wireless base station and Time Capsule back-up device (which is now officially called the AirPort Time Capsule). What did take us slightly by surprise was the rather unusual redesign that both products have received.

The flat, square box used for previous models has now been replaced by a taller, rather monolithic slab of white plastic that measures 168mm high and 98mm wide and deep. The little white pedestal is, admittedly, fairly eye-catching when it sits in the corner beside the modem router dished out by your cable or ADSL company, although it does lack the minimalist elegance we’ve come to expect from Apple. There’s a reason for this new design, though, as it allows the AirPort Extreme and Time Capsule to make the most of the improved performance offered by the 802.11ac technology.

Like its 802.11n predecessor, the Time Capsule can simultaneously broadcast its WiFi signal on both the 2.4GH and 5GHz frequencies, but the use of 802.11ac now provides greater bandwidth for that signal – 80MHz, compared to the previous 40MHz. And, along with other improvements in the 802.11ac standard, Apple claims that the new Time Capsule can provide three times the performance of 802.11n wifi. 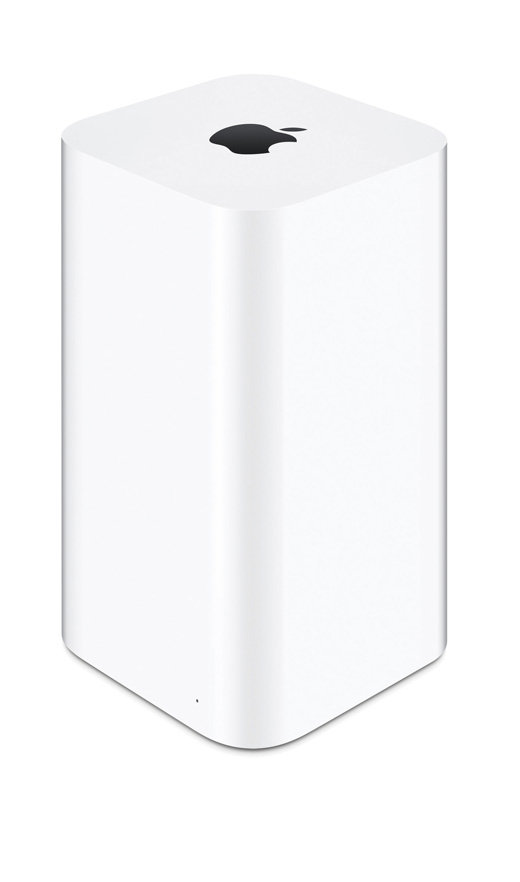 As always, that’s the maximum theoretical improvement in speed, and one that we were inclined to take with a pinch of salt. However, the new Time Capsule impressed us with its performance and does come pretty close to living up to that hype. To test the performance of 802.11ac networking, we backed up a 5GB batch of music and video files from two different MacBook Air models – my own two-year old model that has ordinary 802.11n WiFi, and the recently updated 2013 MacBook Air that also includes 802.11ac.

Backing up from the 802.11n MacBook Air took 10 minutes and seven seconds, while the new 802.11ac model managed it in just four minutes and eight seconds – which works out at a full 2.5 times faster. That’s a welcome and impressive improvement, especially for anyone that uses a Time Capsule for their Time Machine back-ups. We were also pleased to see that the new Time Capsule provides improved signal strength and reliability too.

A conventional wireless router simply transmits the wifi signal uniformly all around it, but the beamforming feature enables the new Time Capsule to precisely locate other 802.11ac devices and to boost the signal strength in that specific direction in order to improve reception.

I have a deadspot in one part of my office that my standard 802.11n router from BT can’t reach at all, along with another room where the WiFi signal is weak and unreliable. However, the new Time Capsule was able to produce a stronger and more reliable signal that reached into every part of my office – and it did so for both the new 802.11ac MacBook Air and a variety of older 802.11n devices, such as my old MacBook Air and my iPad.

The only minor irritation here is that – as always – the Time Capsule and AirPort Extreme can only act as a WiFi base station. They don’t include an ADSL or cable modem for your Internet connection, which means that you have to plug the Time Capsule or AirPort Extreme into your existing cable or ADSL router in order to connect to the Internet. I’ve never really understood the reasoning behind this, as it means that you end up with two boxes and two sets of cables cluttering up your front room or office. You should also note that having two routers on the network can screw with things a little. Unless you switch off the router bit by putting your old modem router into bridged modem mode.

That’s our only complaint, though, and I was pleased to see that the new Time Capsule – in conjunction with the latest version of Apple’s Airport Utility – was even easier to set up and use than before. As soon as I plugged the power cable into the Time Capsule the AirPort Utility automatically popped up on screen of my office iMac and gave me the option of either connecting it to my existing office network or setting up a new network.

The process of setting up passwords is also very simple. As you’d expect, you can set up a password to provide access to the wireless network, and you can also set up a separate password for the Time Capsule itself in order to limit access to its network settings, as well as a third password for the internal hard disk. But if three passwords seem a bit over the top then you can simply tell the AirPort Utility to use the same password for all three options. Other options that can be used to control access to your network include the ability to set up a guest network – with or without its own password – and to set up ‘timed access’ that limits the wifi connection to specific times of day.

We reviewed a Time Capsule with a 2TB hard disk, which stays at its standard price of £249.00, although the 3TB model gets a price cut from £399.00 to £349.00, and the disk-less AirPort Extreme costs £169.00. That’s quite a bit more expensive than a conventional NAS drive – you can buy a number of 2TB NAS drives for around £150.00 – but the Time Capsule does have the advantage of including the high-speed 802.11ac base station, along with its admirable ease of use and automatic support for Mac features such as Time Machine.