It could definitely be a bit more rugged, and we’d like to see a proper Mac version with either a Thunderbolt or Firewire interface. But if you just want a basic USB 3.0 drive that is light and portable and provides good performance for file back-ups then the My Passport Ultra will do the trick at a very competitive price. 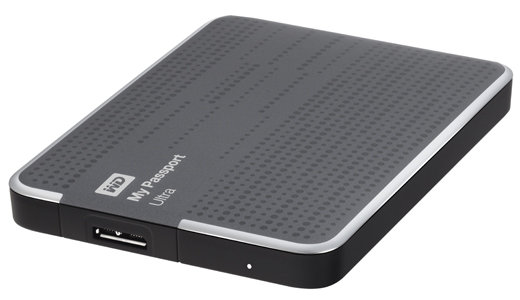 The My Passport Ultra provides good performance at a competitive price

The My Passport Ultra isn’t designed specifically for the Mac, as some of WD’s drives are, but it’s a fast, affordable and compact portable hard drive that will make a good companion for your Mac or MacBook.

The slimline drive measures just 12.8mm thick, and weighs a mere 134g, so you can easily slip it into a jacket pocket or carrying case when you’re travelling. The drive is equipped with a single USB 3.0 port – which, of course, is also compatible with USB 2.0 on older Macs – but there’s no Thunderbolt or Firewire interface.

We tested the 500GB model, which costs a very reasonable £69.99, and there’s a 1TB version that is also good value for money at £89.99. Western Digital says that there’s a 2TB model due soon as well, although it hasn’t set a price for that yet.

The drive comes out of the box formatted in the Windows NTFS format, but it’s no problem to reformat it for the Mac using Apple’s Disk Utility. The only thing to watch out for here is that you don’t delete the various bits of software that come bundled with the drive. The PDF manual provided with the drive falls on its face here – it does say that there’s a way to reformat the drive and then restore the bundled software, but instead of being helpful and telling you how to do this it simply tells you to go and look through the help files on the WD web site.

Mac users also miss out on the new Smartware Pro software that is provided for Windows users. This provides  a continuous back-up option that could be quite handy, as well as integration with Dropbox – which I’d definitely like for my own Dropbox account. We do however, get Mac versions of the WD Security software, which provides 256-bit encryption for your files, and a diagnostic program called WD Utilities

And, most importantly, the My Passport Ultra performs well when backing up data and proved to be one of the most consistent USB 3.0 drives that we’ve seen in recent months. Backing up larger file sizes with the AJA System Test produced a write performance of 100MB/s and read performance of 105MB/s. Copying a 5GB batch of smaller files nudged those figures up to 111MB/s and 106.4MB/s. We’ve seen USB 3.0 drives that performed faster on one particular test, but none that matched the consistency of the My Passport Ultra across all of those tests.

In fact, our only real complaint is that the My Passport Ultra could be a little more solidly built. The plastic case couldn’t really be described as flimsy, but it’s definitely not as sturdy as it could be and we’d worry about dropping it when we were out and about.