For music fans, Shazam really is an essential app, one that should also appeal to casual users who simply want to identify which song is being used to soundtrack a new ad or drama, without resorting to a trawl through the Internet. Its ability to identify even the most obscure of tracks is very impressive, especially at times and places when the listening conditions are less than ideal.

Although UK company Shazam has been in business since 2002, it only recently enjoyed mainstream headlines with the announcement of a major investment, some $40 million from Mexican telecoms tycoon Carlos Slim. With more than 350 million people, in more than 200 countries and 33 languages, using Shazam, the deal will give the company potentially access to a additional 260 million Latin American mobile subscribers. It appears to be all good news for Shazam who, according to Companies House, made a loss of some £3m in the year running up to June 2012, on revenues of £22m. 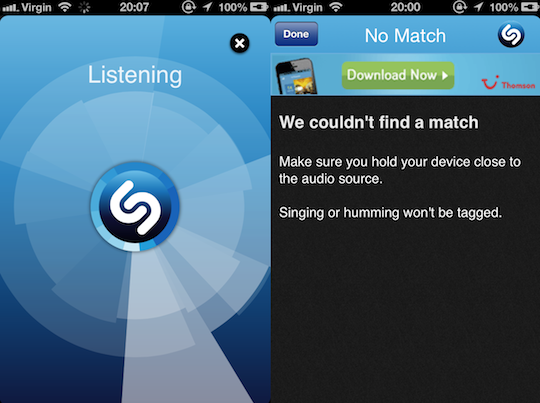 So Shazam started life before the advent of smartphones and tablets but has essentially been refining one idea, the ability to identify the music all around you, over the last 10 plus years. Users simply tap the Shazam button to “tag,” rather identify, tracks they like the sound of, or indeed want to avoid ever hearing again. Currently Shazam users can buy tracks via iTunes, watch related videos on YouTube, sees what tracks friends have tagged, share discoveries via Facebook, Twitter and Google +. Interactive maps meanwhile allow users to see what’s popular locally and further afield, although these appear to pretty much replicate the charts, with pop music dominating listings, which barely helps in discovering new music. 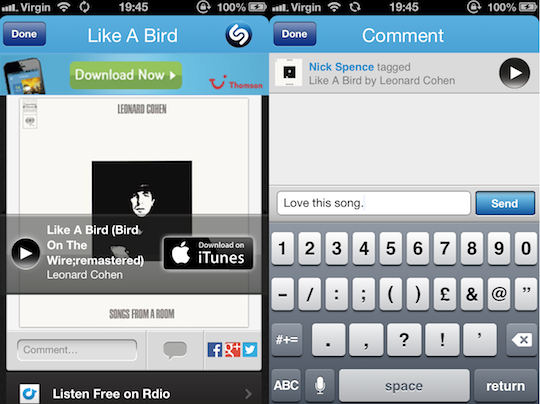 In the wild, wandering the streets and shops of London Shazam performed impressively,  identifying tracks we’d struggle to name from artists we’ve only ever heard of. To gauge the success rate of tracks we didn’t know, we played the track back from within the app. Back home we randomly chose tracks from iTunes and Spotify, adding some additional noise including a fan and TV switched to a news channel to test Shazam’s effectiveness with tracks we actually knew. Out of 100 snippets of music it failed to identify just 6 tracks, including a band called Spain, an acoustic version of a track by Midlake, along with a mid 1970s MOR track from Scott Walker, which we ripped from vinyl. 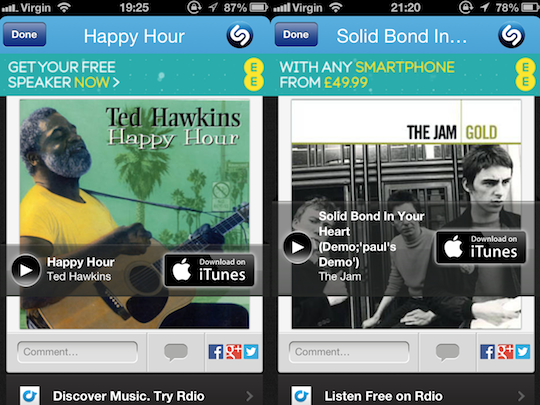 Shazam offers various ways to upgrade to Shazam Encore including buying the app from iTunes or via ‘Top In-App Purchases – Lifetime £4.99,’ which removes the rather annoying ads and offers support to play tagged tracks in Spotify and US service Pandora. As the free version of Shazam doesn’t limit the number of songs you can tag this may not be that appealing, but it’s an option worth considering. It’s also worth noting that auto tagging, new as part of the 6.0 update, which allows Shazam to automatically identify tracks is currently only available to iPad users. This auto option can be toggled on and off, while for those worried about privacy Shazam promises auto tagging “can’t recognise what you’re saying.” A 6.1 update meanwhile adds Shazam Pulse, which lets users discover new music via real time charts, although this is dominated by mainstream pop music.