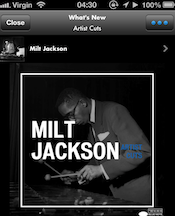 If Blue Note Records and developer Groovebug can build on this solid start and offer a greater number and wider range of recordings, then Blue Note by Groovebug won’t fail to impress. Digging deep into the archives to unveil hidden gems while adding exclusive live sessions from contemporary artists would be the next logical step, one that would only add value to this already quality app.

Established in 1939, Blue Note Records has built an impressive catalogue of jazz recordings, many featuring iconic musicians such as Miles Davis, Art Blakey, Thelonious Monk, Jimmy Smith, Lee Morgan, Horace Silver, John Coltrane, Eric Dolphy, Sonny Rollins, Donald Byrd, Grant Green, Dexter Gordon, Herbie Hancock, Ornette Coleman and many, many more. Blue Note by Groovebug, originally for iPad and now iPhone and iPod touch, takes a sample of this catalogue and makes it available on the go to iPhone, iPad and iPod touch users. Free to download, it offers casual users 30 second snippets of tracks, which compares poorly to iTunes 90 second previews, but does include a range of extras including features, bios and a chance to view some class, classic footage via YouTube without leaving the app. 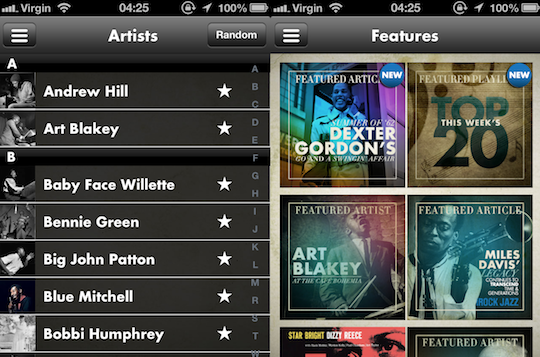 For those willing to invest in a monthly subscription using the ‘Top In-App Purchases’ option, listeners can enjoy over a thousand songs or over a hundred hours of Blue Note recordings, including Wayne Shorter, Dexter Gordon and Art Blakey. That’s a relatively small sample from a exhaustive back catalogue but new music is promised each month, while Blue Note are currently working with rights holders to add more artists and tracks. Blue Note Premium costs £1.49 per month and subscriptions automatically renew within 24-hours prior to the end of the current period at the same rate, although you can turn this option off in Settings should you find yourself listening less and less. Tracks are streamed “up to 320 Kbps” and sound pretty fine to our ears, especially with a decent pair of headphones or earphones. The addition of a speaker dock is clearly a big plus here, while Blue Note by Groovebug offers AirPlay mirroring for Apple TV users. For those concerned about using up monthly data allowances, users can limit streaming to a more modest 128 Kbps. 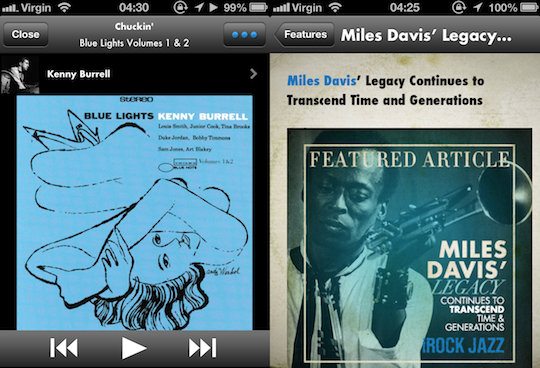 Alongside great music, Blue Note by Groovebug has a simple, attractive user interface, which is newly optimised for the smaller iPhone and iPod touch screen, which makes browsing tracks and artists a breeze, including quickly saving favourite artists by highlighting a star.  Along with tremendous vintage album art, so revered it’s been the subject of several coffee table books, the app includes some equally vintage photos and press clippings, plus brief but informative bios. Additionally, each month Blue Note highlights an album, artist, article or offers a featured playlist compiled by musicians, journalists, and other jazz experts, including at launch vocalist José James’s playlist of favourite tracks. Users can create and save playlists for themselves, while choice tracks can be shared via Facebook and Twitter. Lastly, while Blue Note by Groovebug links to additional content available online without needing to leave the app, some links appear to be dead. 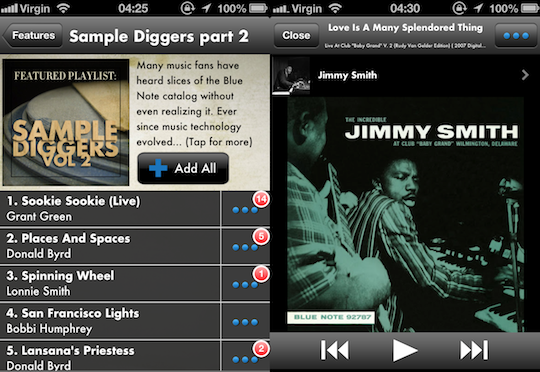