Brave New World really epitomizes what the Civilization series is all about. There’s combat aplenty if that’s how you like your strategy games, but the political, religious and cultural elements that it adds to the mix create a game in which you really can develop an entire civilization, rather than just building up a big army. It may be rather complex for beginners, but Brave New World is a must-have expansion for existing Civ fans. 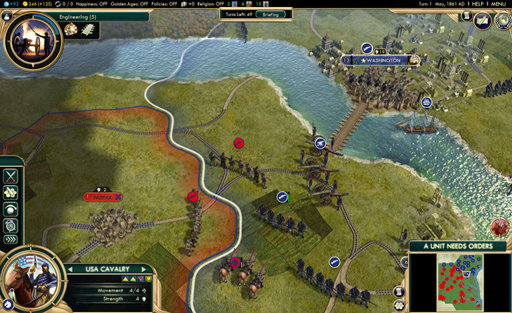 Conquer the world – from the Globe Theatre in London

The Civ series of strategy games has long since passed the point where all you had to do was build up a big army and then go off and conquer the world. Civilization V beefed up the diplomacy elements within the game, while last year’s Gods and Kings expansion pack added religion to the mix. Brave New World adds even more depth to the game and introduces some major new elements that can affect the development of your nation and its standing in the world.

Starting with the basics, Brave New World adds nine new civilizations to the game, including Portugal, Brazil, Morocco and the Zulus. Each of these has its own different types of building and military units, such as Morocco’s Kasbahs and Berber cavalry.

They’ve even snuck in a new unit called the XCOM Squad – a high-tech fighting unit that nods to the developer’s recently released XCOM game. There are two new battle scenarios – the self-explanatory American Civil War, and Scramble For Africa, which depicts the colonization of the African continent by various European powers.

However, those new features are really just the icing on the cake. The real substance in Brave New World lies in the new cultural and ideological systems that it adds to the game. The ‘Culture Victory’ is a new way of conquering the world, whereby nations can place writers, musicians and artists in key buildings – such as the Globe Theatre in London, which has quite rightly been added as a new Wonder Of The World. In the later stages of the game these arty-farty types can conquer the world as effectively as soldiers by exerting an overwhelming cultural influence over all your rivals.

Once a nation has reached the technological age it can then choose to follow a particular ideology. Nations can choose freedom, order or autocracy, and these ideologies function in a similar manner to religions, providing bonuses that aid development as well as affecting your standing in the world. There are improvements to the existing trading and diplomacy systems, such as the new World Congress – a forum that allows nations to vote together on issues such as trade sanctions.

These new features add even more depth to an already rich and challenging game, and they’ll have existing Civ fans gripped for hours on end.

Newcomers might find Civ a bit daunting, though, especially since the game doesn’t do a terribly good job of explaining some of these new features. Neither the PDF manual nor the game’s built-in Civilopedia make much effort to explain the new ideologies or the way that they can affect your nation’s development, so people that are coming to the Civ games for the first time may find themselves floundering in the face of such complexity.