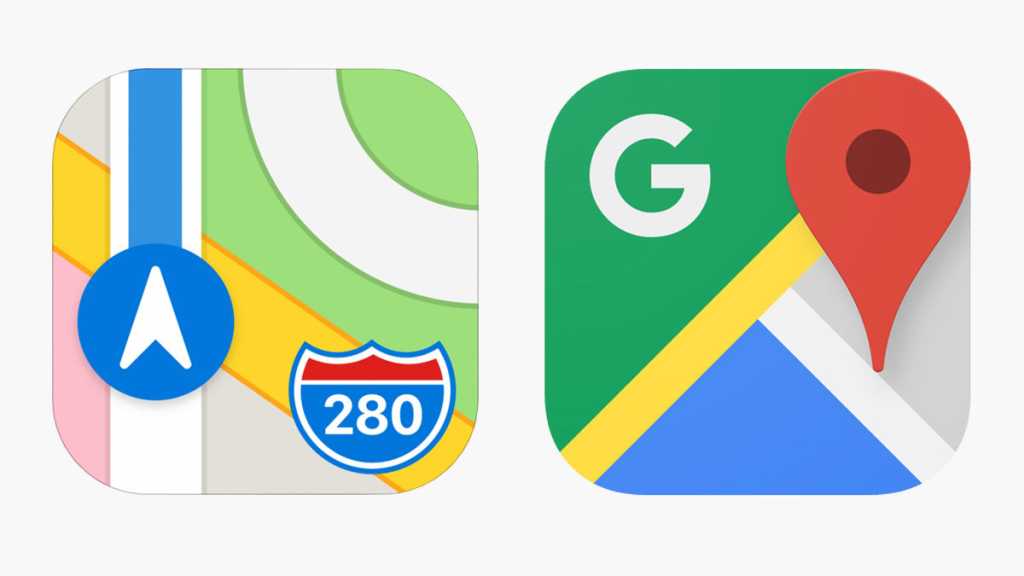 When we first compared these two mapping services in 2012, Google trumped Apple in every category, but Apple Maps has vastly improved since then and matches its rival in most areas. We now feel Apple’s turn-by-turn navigation is better, although we still prefer Google Maps for local search.

Once upon a time, Google Maps was the go-to mapping app for iPhone users. But in 2012, as part of the iOS 6 software update, Apple released its own rival – called, simply, Apple Maps. The two services have been fierce rivals ever since.

In this article we compare Apple Maps and Google Maps, six and a half years on from that game-changing launch. Has Apple finally caught up with its rival? We look at reliability, ease of use and features to help you decide which is the best mapping app to use on your iPhone and iPad.

The good news is that both apps are free. Apple Maps comes preloaded on all iPhones and iPads, while you can download Google Maps from the App Store. (Apple Maps will remain the default map service, and iOS itself will always by preference load an address in that app. But plenty of third-party apps do not make this assumption, and will ask which you’d prefer.)

As a preinstalled app, Apple Maps is subject to updates whenever a new version of iOS comes out: public-transport directions were added as part of the iOS 9 update in 2015, for instance, while iOS 12 brought an entirely revamped service.

When Apple Maps was first released, there were a plethora of bugs and inaccuracies, including people ending up in potentially dangerous situations in Australia. (Maps displayed Mildura in a national park, where temperatures can reach 46 degrees Celsius, when it was in fact 44 miles to the northeast.) There were other famous cases of islands appearing twice, hospitals and supermarkets being mixed up, Dulles Airport having the wrong address and similar gaffes.

But teething problems are to be expected when a new service rolls out, and the calamitous errors have been fixed. How do the two services’ data accuracy compare now? 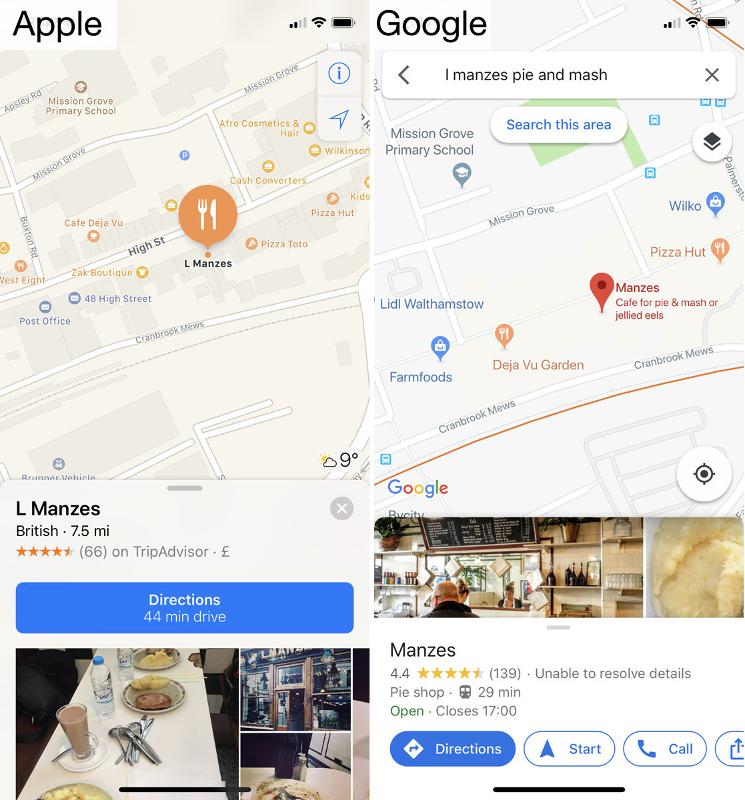 Let’s first paint a picture of the processes used by Google to make sure its data is accurate. It bought a high-resolution satellite imagery company called Skybox for $500m, and employs what has been described as a small army of human operators to manually check the maps, respond to problems reported by users and correct any errors.

Apple has also been busy since its Maps service launched: a third of its acquisitions in 2013, for example, were mapping companies. (It bought Locationary, a firm focused on crowdsourcing location data, and HopStop, which collects data from hundreds of transit agencies, among others.)

And iGeneration reports that Apple has set up a Mechanical Turk-style user programme for verifying the data in its maps. Those who contribute will be paid around 54 cents per location, up to 600 times a week.

The days of major gaffes are long behind Apple Maps, and in most respects you will find it as or close to as accurate as Google Maps.

Apple Maps shows building as well as streets, and more of the local businesses; whether you find this extra information useful or distracting is a personal thing. Google, on the other hand, appears to be more thorough when it comes to those streets. If you look at the screens above, for example, you’ll see that Apple only shows the drivable thoroughfares below Cranbrook Mews, whereas Google also shows the walkable paths and sidestreets (in grey).

Both mapping services now perform to a high degree of accuracy, but of the two, Apple still seems to be more prone to small errors.

We’ve noticed the app putting business markers very slightly in the wrong place (only by a matter of metres, but this can still be odd or confusing – Barnet Superstore appears in the middle of the A1000, for example). Google does have similar problems on occasion, but less often, in our experience.

Having the ability to navigate around using your chosen maps app is a dealbreaker for most people. Both services provide various options for route planning: Apple Maps offers driving, walking, public transport and ride-booking apps, while Google adds cycling too. 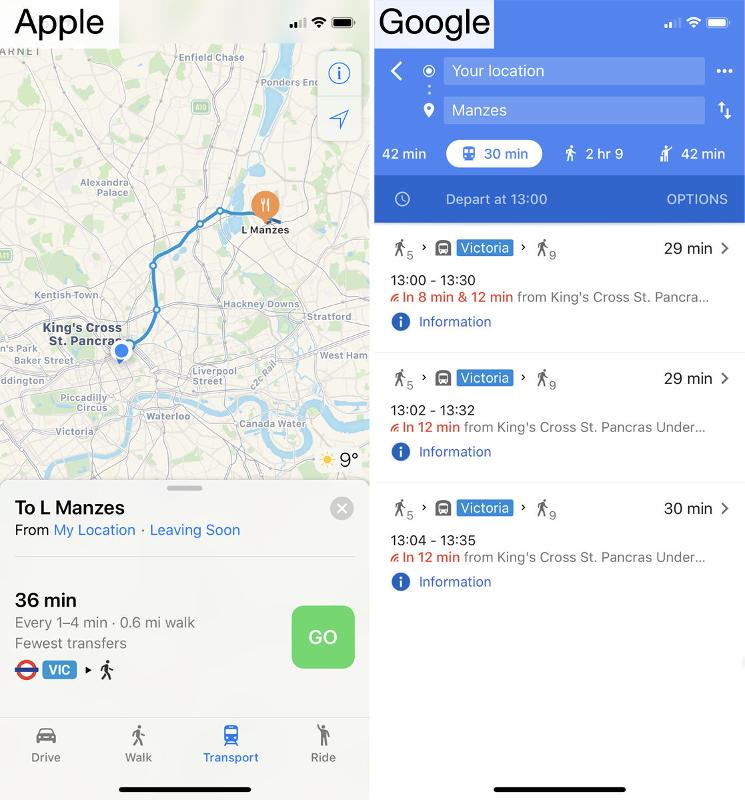 When you search for something in Google Maps, such as ‘restaurant’, you’re presented with matches in your area, sorted (mostly) by distance, but filterable by other criteria. Google also gives you handy warnings about opening hours (‘closing soon’ is highlighted in orange, ‘closed’ in red), a description, a price band if available (£, ££ and so on), a swipable gallery of pictures and a star rating.

Tap one of the search results and you’ll see further details and the option to get directions via the various modes of transport. The app will also offer alternative routes and tell you how they’ll affect your ETA. 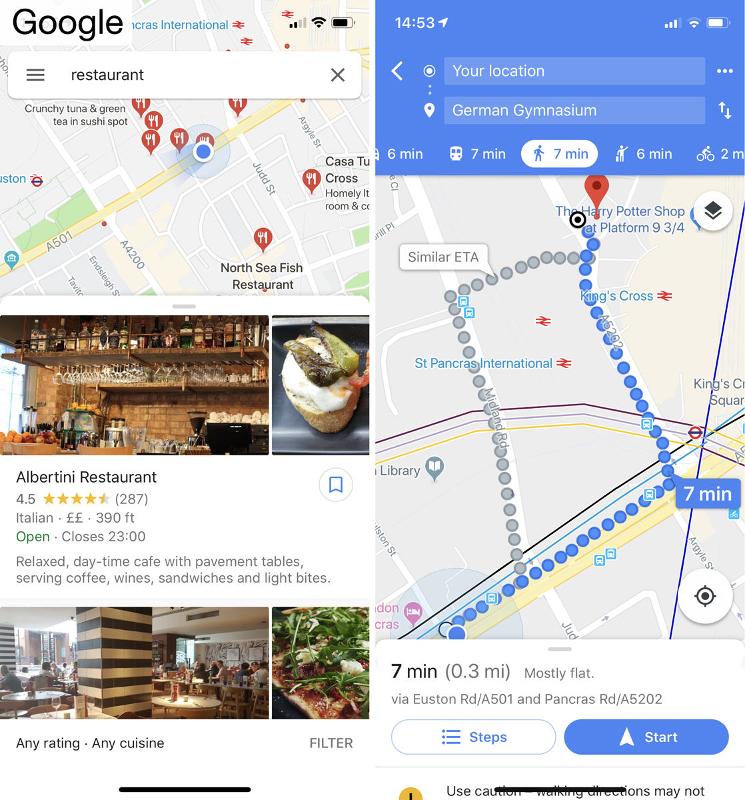 Apple Maps presents a similar but more concise list of search results. As with Google you get distance, star ratings, price band if available and, frequently, a (single) picture. But whereas Google gives a sentence of description, Apple offers only a one- or two-word category.

We tend to prefer Google’s more informative list, but Apple’s approach does mean you can browse more options on the screen at once. You tend to get a better view of the map, too.

Tapping on a result in Apple Maps will centre it in the map view and provide additional information including the address, phone number, full opening hours, whether they allow reservations and deliveries, and short reviews. You can also get directions via four modes of transport; Apple seems less likely to offer alternative routes. 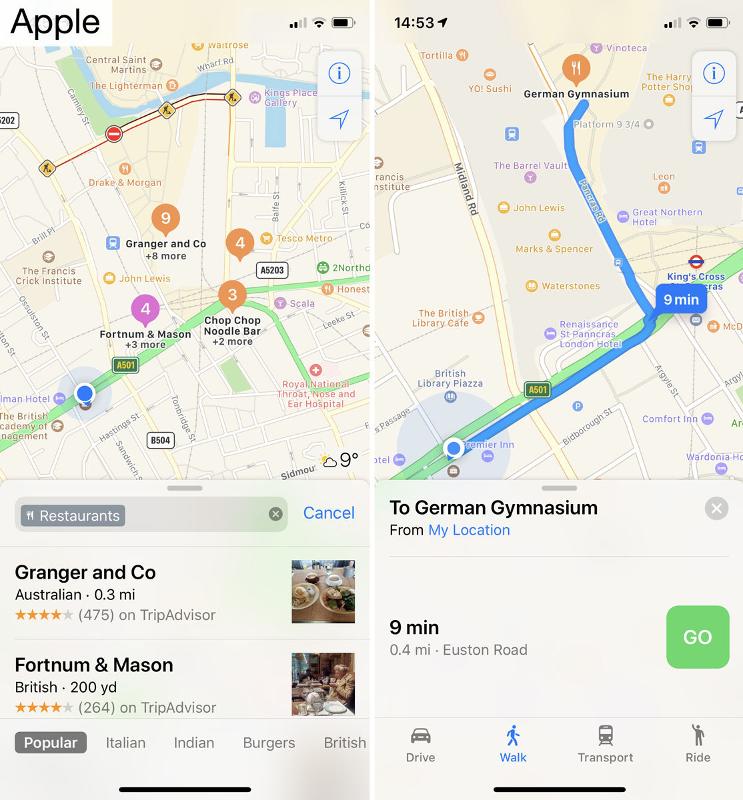 Aside from the less informative listings, we weren’t always convinced that Apple Maps search was returning the best options. Running a search for restaurants in both apps in the same area, we found surprisingly few overlaps in their respective top tens – and while Google was unearthing what seemed like sensible choices, Apple often plumped for cafes, pubs and bars that stretched the definition.

Finally, Apple Maps search behaved oddly when we looked for ‘restaurant’ via the normal search, indicating no results at all. To get the list of options discussed above we had to tap the Food & Drinks > Restaurants buttons that sit above the search entry field.

The centrepiece in a plethora of features in both Google & Apple Maps, turn-by-turn navigation has negated the need for a traditional (and usually expensive) satnav in many people’s lives. While both are easy to set up and both boast audio prompts for every step of the journey, there are some subtle differences. 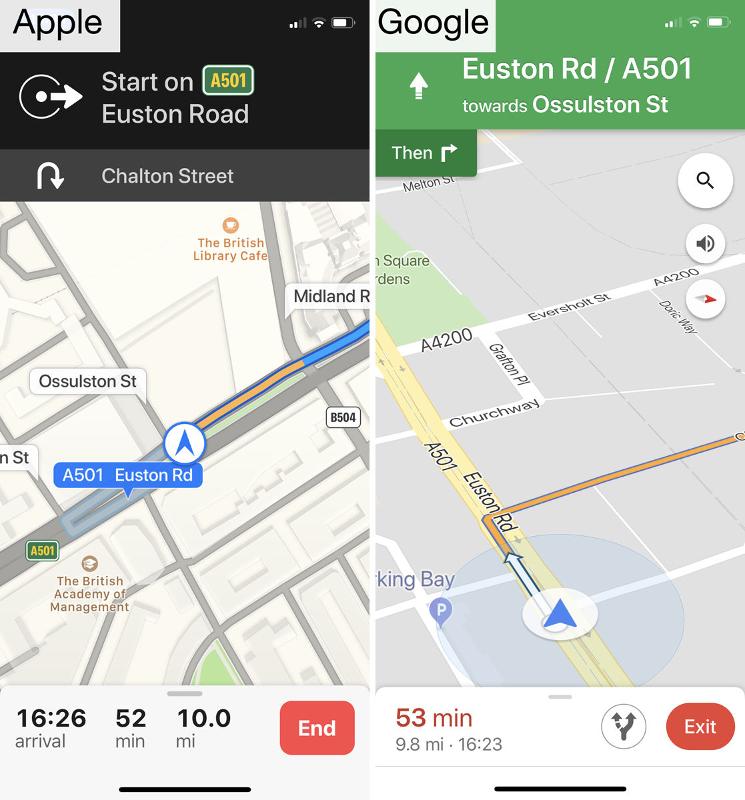 The biggest selling point for Apple Maps’ turn-by-turn navigation has to be the 3D map view (activated by swiping up with two fingers once you start a journey). You can see every building around you in 3D, helping you work out exactly where you are in relation to your position on screen.

In normal use, our view is that Apple Maps’ navigation UI is clearer than Google’s, especially when only glancing at the screen, and looks more like a traditional satnav: you can see your current location and upcoming directions very easily. Google’s turn-by-turn navigation doesn’t feel quite as polished.

One feature that we weren’t expecting was the voice command feature, allowing you to control Google Maps’ turn-by-turn navigation by tapping the microphone on the top right hand side of the app and stating your action. While some people may not see the uses that this can provide, it means that if you use Google Maps as a satnav, you’re not distracted from driving by fiddling around with it.

iOS can interpret Siri voice commands (“get directions to British Museum”) into Apple Maps directions, although we haven’t always found this brilliantly handy.

For our 2019 update to this article, as we have in the past, we asked for directions to Worcester and Siri still assumed this meant Worcester, Massachusetts. This despite knowing the user is British and currently located in Britain, and that the Midlands city is vastly closer and far more likely to be the intended destination.

While there are a lot of similarities between the two mapping titans, they also have some big differences.

Apple Maps has a few gimmicks. The Flyover tour, which is available for multiple locations around the world, is lots of fun: it’s interesting to get a virtual tour of, say, New York with 3D maps, letting you see the sights without having to actually travel there. And we love the semi-AR way that Flyover mode works: move your phone around and the view changes correspondingly. It’s like you’re really there.

Certain objects are dynamic in Flyover – the London Eye rotates, for example. While these aren’t particularly useful, they offer you a glimpse of how interactive maps could become in the next few years.

Google Maps, on the other hand, comes with a variety of extra features – with the main one being Google Street View. Street View revolutionised the service when it was launched and it enabled people to get a street-level view of where they’re going, giving them a better idea of their end location.

It didn’t stop with directions, though; people found themselves exploring places all around the world, with the service still generating a lot of interest years after launch. You can even get Google Street View data inside certain buildings, such as Euston Station, enabling people to find shops and restaurants more easily.

When we first compared these two mapping services in 2012, Google trumped Apple in every category. But Apple Maps has vastly improved since then and matches its rival in most areas – indeed we now feel Apple’s turn-by-turn navigation may be a little better.

We still prefer Google Maps for local search, however, where its listing are more informative and, subjectively, seem to produce more appealing choices.

While there are areas that both Google and Apple can improve on, we’re certain that using Apple Maps won’t direct you to drive into the Thames, and that most of the initial issues have been fixed. These days your choice may come down to the aesthetic differences between the interfaces, or whether you find Street View or Flyover a more appealing AR experience.