Deus Ex: The Fall is a pretty marvellous game, and one that says a lot about the ambitions and capabilities of mobile developers. At £4.99 it’s on the expensive side for an iOS title, and it’s also fairly brief. But while it lasts The Fall is neatly designed, graphically stunning and loads of fun.

Deus Ex: The Fall is a stunning stealth-roleplay-shooting game for the iPad and iPhone (we tested on iPad), bringing the graphical ambitions of console gaming to mobile. Here’s our Deus Ex: The Fall review. 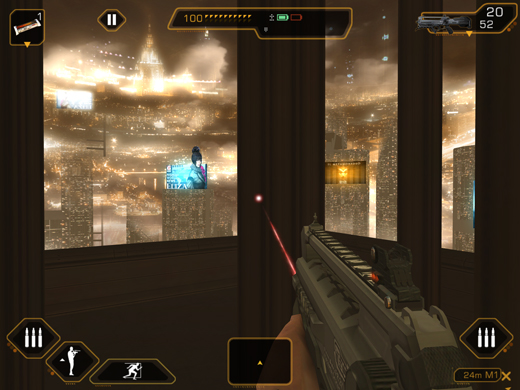 Truly we live in a golden age for mobile gaming. Development has branched off into two polarised worlds, both capable of producing exceptional work. You’ve got the lateral thinkers, dreaming up simple but ingenious concepts that suit touchscreen gaming perfectly (Where’s My Water, Super Hexagon, Ridiculous Fishing, Pangolin). And then you’ve got the miracle workers, who won’t take no for an answer and somehow find ways of bringing full-blown AAA games to the small screen. Such as Deus Ex: The Fall.

It’s not a port of the PC/console behemoth Human Revolution, but an entirely new title for mobile platforms. But the experience – the graphics, the range of gameplay options – is impressively close to the earlier game. The principal difference in scope is one of length, but given that The Fall costs about an eighth of the price of the Xbox edition, it’s not a surprise that this isn’t a long game.

Looks-wise, though, this is an absolute stunner. The vistas are gorgeous, detailed and evocative, showcasing Deus Ex’s trademark sci-fi exoticism. The character models are pretty good, if occasionally a little ‘uncanny valley’, but the backdrops are superb. 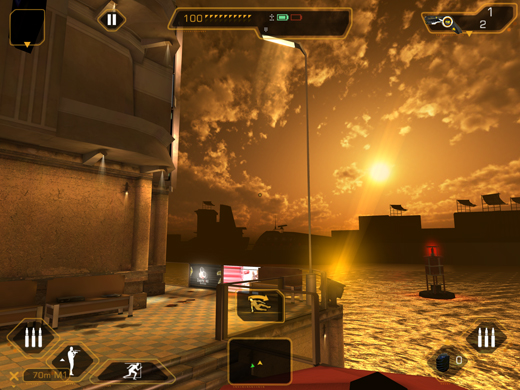 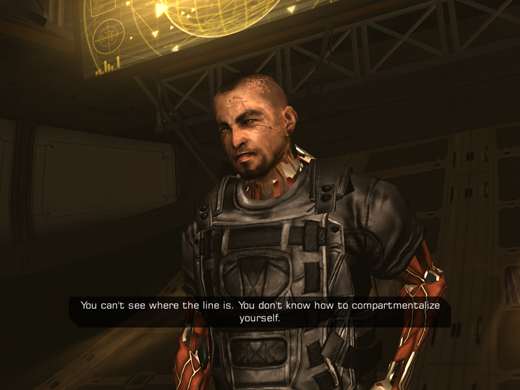 Deus Ex: The Fall is one of those genre-straddling games so popular right now, and often summed up as simply ‘action’; more accurately, it’s a stealth-roleplay-shooter. At first glance it looks like a straight first-person shooter (by touching onscreen ‘joysticks’ with left and right thumb you control your character’s movement and aim). But if you manage to sneak up on an enemy without alerting them, options appear to let you soundlessly kill or subdue them, complete with spectacular animation.

(In this respect it’s reminiscent of the wonderful dystopian stalker sim Manhunt, although the animations are nowhere near as bloodthirsty. Let’s face it, nothing is as bloodthirsty as Manhunt’s kill animations.) 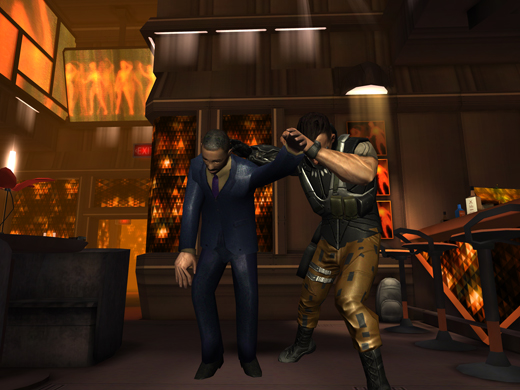 When you take a screenshot of Deus Ex’s kill/subdue animations they always look like the two men are dancing. But it looks slick in real time

The enemies nearby appear on your map as vector arrows, colour-coded to indicate how aware they are of your presence. So you can sneak around, picking off peripheral lookouts before going in for the kill. Or you can go in guns blazing like Arnie in Commando. It’s genuinely open to multiple approaches. And there’s something really satisfying about exploring the levels and discovering semi-hidden routes – or hacking your way through security gates, as we’ll discuss later – that get you the drop on the villains.

Combat in The Fall isn’t perfect, cathartic as those close-up animations can be. The shooting took us a while to get used to on a touchscreen, for one thing. You get the option of having two fire buttons, and we’d recommend this, since we found it necessary to switch between left and right thumb shooting depending on the circumstances: depending on whether you’re strafing or tracking a moving target, you’ll have a different finger free to shoot with, and if you use the ‘tap to lock on’ function, that adds additional complication. We got our hands in a bit of a muddle while getting the hang of it all.

It’s understandable, though, given that we’re trying to replicate the classic mouse-and-keyboard FPS setup on a handheld touchscreen. It’s fiddly rather than infuriating, and you do get used to it. 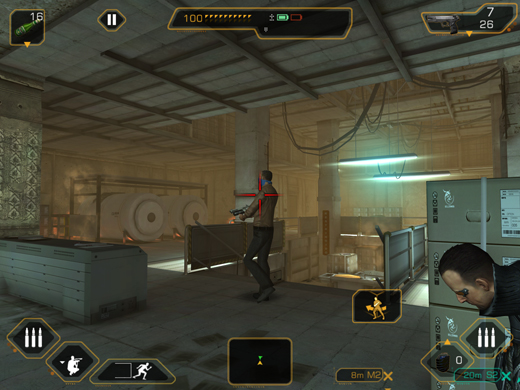 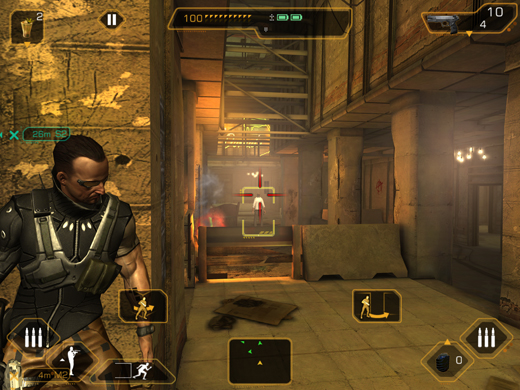 You can cling to and leap out from cover

And The Fall isn’t just about wandering around and shooting people. The story, you see, centres on the future development of personal cybernetic augmentations, and the corporate interests and drug trades that grow up around them. Your character, an endearingly lunkheaded ex-SAS man called Ben Saxon, has a set of ‘augs’ of his own, which simultaneously supplies motivation (he needs to track supplies of the drugs that stop his augmentations killing him) and injects an RPG element (as you get the augmentations upgraded).

So you start off with a basic set of capabilities, but grow stronger, smarter, more aware and so on as your kit improves. I’m a sucker for the simple challenge-and-reward element of an RPG (‘Yes! I can now hack level 2 gates!’) and moving your character up the various skill branches is both fun and very mildly tactical. Do you want to focus on fighting, or stealth? What about hacking?

Oh yes, the hacking. This is just a nice little mini-game, really, but it’s fun, and adds depth to the exploration side of things. If you want to break through a locked door (or safe etc) you have to play out the hacking process as an oddly literal puzzle game, setting off sub-routines and trying to avoid the defensive measures. A nice touch. 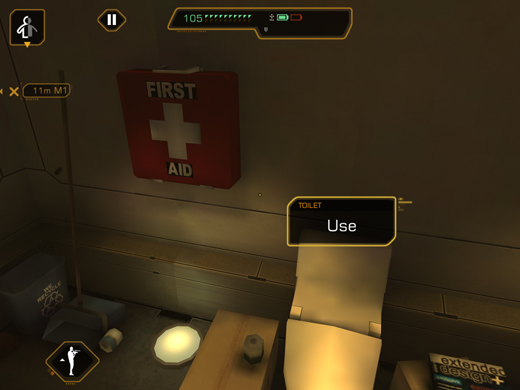 For more iOS app and game reviews, why not download  iPad & iPhone User magazine? It’s free, and includes a free full issue of the magazine.