It’s all about pictures however and using the general-purpose 18-55mm kit zoom supplied it’s possible to get those attractive, DSLR-style, shallow depth of field effects, even if we found busy scenes could confuse the camera’s AF as to what it should be focusing on. More positively, the back screen ensures that images always look an absolute knock-out. As a first of its kind product the minimalist design and high asking price will inevitably divide option however.

The Android-powered Galaxy NX might not sit well with OS fans, but a lot about it feels like the future despite the hefty initial price 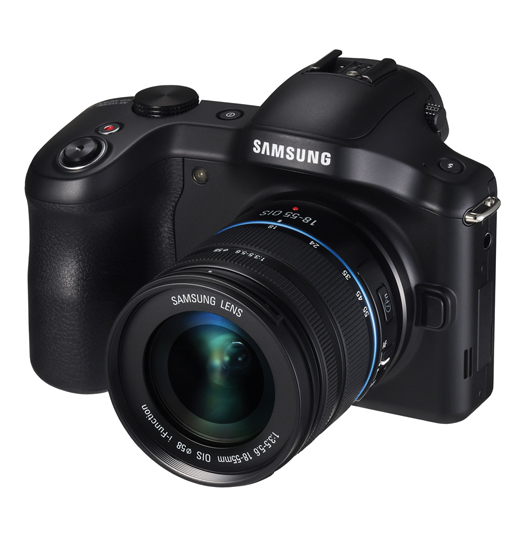 We reckon the Galaxy NX compact system camera is worthy of inclusion here as it’s the world’s first Android powered interchangeable lens camera – Android 4.2 ‘JellyBean’ to be precise – and follows on from 2012’s standalone Galaxy Camera upon which the lens could not be swapped.

As the model name suggests, this device borrows both the operational aspects of the Galaxy range – namely the touch screen, downloadable and pre-loaded ‘apps’ – plus the more conventional camera features of the ‘NX’ series, such as chiefly its lens mount. This currently provides access to 13 available Samsung NX optics, with a standard 18-55mm coming supplied out of the box.

However the camera here, its design resembling a futuristic DSLR, is still initially accessed by tapping on a camera app like you would on a handset or tablet. Whilst that may have photo enthusiasts turning puce, there are plenty of other familiar smartphone-like options to distract you besides, especially if you start downloading games and the like.

Connectivity-wise the Galaxy NX is bang up to date, offering not only Wi-Fi and Bluetooth as means of transferring images – along with simply using the supplied USB lead or removing the small and fiddly microSD of course – but is also 3G and 4G enabled, with a slot provided for a SIM card too. The only thing it currently misses out on in terms of interfacing with your smartphone is NFC or Near Field Communication. If you’re not fussed about an Android operating system then also check out Samsung’s recent NX300, as this incorporates the exact same 20 megapixel APS-C chip as the Galaxy NX does. Something that may also have you looking elsewhere is this camera’s price; it’s a sizeable £1199 for the body only – or £1299 for the kit that comes with an 18-55mm standard zoom incorporating Samsung’s iFunction control – so a similar price to a semi pro DSLR.

The real wow factor here however is the huge 4.8-inch, 921,600 dot LCD display which the entire backplate is given over to, to the extent that from the rear  the Galaxy resembles more of a phone or tablet than a camera. With the ability to choose between ‘standard’ and ‘professional’ mode when shooting, the latter provides greater access to funky manual functions, such as tweaking aperture and shutter speed with a spin of a virtual lens dial. The only hard keys are to be found on the camera’s more traditional top plate.