This new version of the Slim Portable For Mac retains its attractive, portable design while providing USB 3.0 performance and better value for money. Its 500GB capacity might be too small for some people, but that’s its only real limitation and the Slim Portable is hard to beat if you just need a really portable back-up drive at a competitive price. 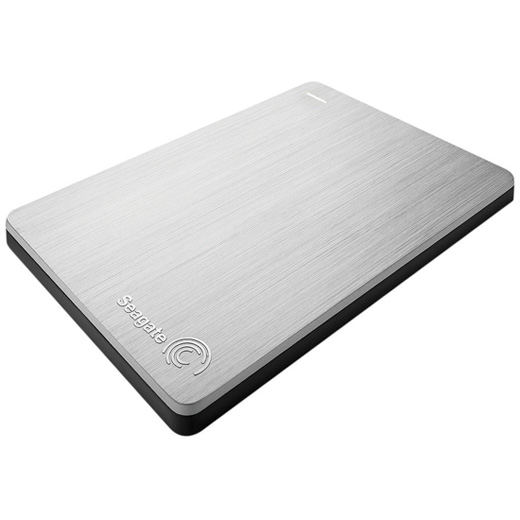 Seagate’s Slim Portable is, as the name suggests, one of the slimmest, lightest portable drives currently available. However, the Mac version that was released last year only had a USB 2.0 port, while the separate Windows version already had USB 3.0.

The Mac version was also the more expensive of the two despite having the slower interface. Thankfully, this year’s model has been updated with USB 3.0, and now provides significantly better performance, as well as a lower price.

The drive’s slimline design remains the same, with a smart, brushed metal finish that will complement most current Mac models. Like its predecessor, the Slim Portable measures just 9.6 mm thick and weighs 150 g, so you can easily carry it in a case alongside your MacBook, or slip it into a jacket pocket. There’s no carrying case included with the drive, but it feels quite solidly built and should be able to cope with a few minor bumps along the way.

There’s only one model currently available, with a storage capacity of 500 GB, but the price has come down by £20 to about £65. The original USB 2.0 model provided was slow, but the USB 3.0 interface on this latest version allowed consistent speeds of 110 MB/s in all our tests for both read and write speeds. Those speeds are comparable to most other USB 3.0 drives that we’ve seen recently, so the drive’s slimline design doesn’t limit single-threaded sequential performance.

The Mac version of the Slim Portable is pre-formatted to the Mac’s HFS+, and it works with Macs straight out of the box, including automatic Time Machine backups. Seagate also includes a Mac version of its Dashboard software, which allows you to upload photos and videos from the drive to YouTube, Facebook and Flickr. If you tend to upload photos from your smartphone from the social services then Dashboard will also allow you to download copies of those photos from the web onto the Slim Portable for backup too.

Seagate also provides an HFS+ driver for Windows, which you can download from its web site, so that you can use the drive with Windows without having to reformat.

There’s no 1 TB version of the Slim Portable, but Seagate does make another portable drive – the Backup Plus – that is offered with 1 TB storage and a Thunderbolt interface.