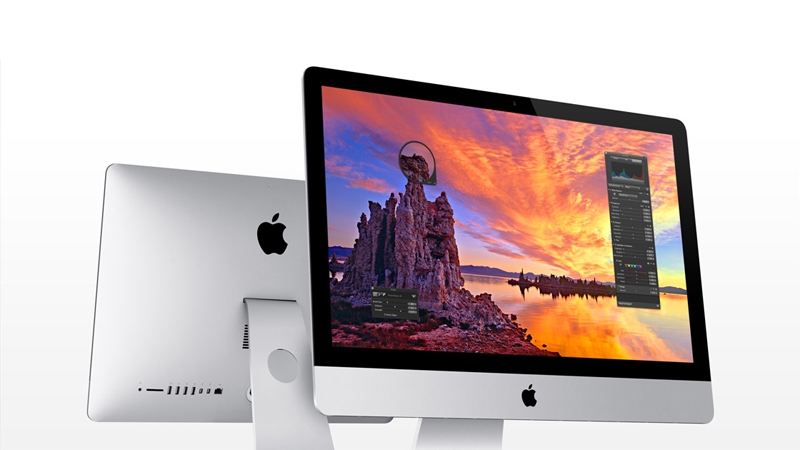 Two simple changes have brought some useful benefits to this year’s update of the Apple iMac line. Based on the two models we tested, the Intel Haswell chips have allowed more efficient performance, which will reward with cooler running and cheaper electric bills. And in the 21.5in model we also witness Intel integrated graphics that are finally worthy of true gameplay. With the Wi-Fi upgrade to 802.11ac, the 2013 iMac is also ready for the ‘gigabit wireless’ future.

This year’s update to the iMac is subtle, and introduces two principal changes in technology over last year’s major refit. Read on to find how useful they may prove.

Like so much computing tech in use today, the Apple iMac serves as the widely copied template for other brands’ products. Look over the range of all-in-one PCs from the likes of Dell, HP and Lenovo, and we see the same essential form as the flatscreen iMac that first launched in 2004 as the iMac G5.

Today’s iMac is a rather different machine to Apple’s first fully flatscreen computer. It was redesigned last year with an LCD display that now tapers to almost nothing on its edge, in contrast to what now look like chunky fat sides on every older model. And instead of a single PowerPC processor in that first flatscreen we have quad-core Intel chips, optimised for efficiency as much as performance.

But the essential physical layout is still the same – a widescreen panel set in single frame, with ‘chin’ below a screen that’s suspended on a single folded-aluminium foot. With all ports cleanly hidden behind, and free of the bluster and bolt-on fugliness of its imitators, the flat Apple iMac remains a design classic. 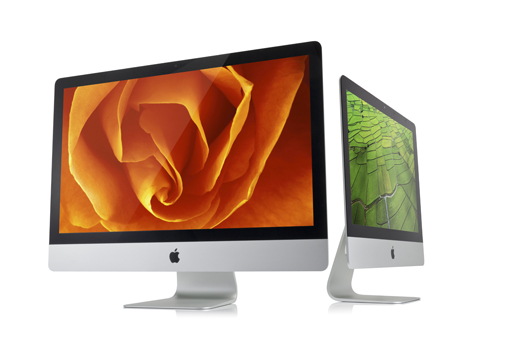 The smallest and most affordable version of the Apple iMac features a widescreen display that measures 21.5 inches on the diagonal, a comfortable size for desktop productivity. It’s pixel resolution is still 1920 x 1080, which amounts to a pixel density of around 102 ppi. So Apple hasn’t taken the iMac line to Retina-class display just yet, although the pixel-per-inch count is still a little higher than most regular screens.

And that panel still counts as about the finest you’ll find on any desktop computer, thanks to a combination of IPS screen technology and the way the TFT matrix is bonded directly to the screen glass.

In-plane switching panel technology was popularised by Apple with first its Cinema Display monitors, then much more widely with the introduction of the iPhone 4 and the first iPad. We now almost take for granted the rich, accurate colours and viewing fidelity at all angles that is possible with this more expensive manufacturing process.

Bonding together the elements of the screen brings a huge improvement in clarity over the previous arrangement, which comprised a glossy and reflective LCD panel, itself covered with another pane of mirror-like glass. Besides the removal of an entire reflected surface, the treatment with an optical anti-reflective coating to today’s iMac completes a display that can be used in daylight without excessive and distracting reflections. [See also: Which Mac should you buy?]

Two models of 21.5-inch iMac are offered ready to go. Both use 1TB hard drives – necessarily small laptop-sized 2.5in disks to squeeze inside – along with 8GB of memory. Neither storage nor memory is designed to be user replaceable, as they’re locked away behind a screen that’s literally glued in place.

If you think you’ll ever want to expand either memory or storage in the future, you’d best do it at time of purchase. You can opt for a 1TB Fusion drive, which melds the same notebook disk to a separate 128GB solid-state drive using OS X’s Core Storage technology.

Apple’s hybrid Fusion Drive gives most of the benefits of faster access, with plenty of storage space too. Or you can cut straight to a purely flash-based drive, namely a 256 or 512GB SSD. For memory, there’s the option of doubling to 16GB.

The other differences between models lies in the main processor, either 2.7GHz or 2.9GHz Intel Core i5 ‘Haswell’. And in graphics processor. The cheapest model, which at £1149 is £50 premium over last year’s counterpart, uses just the integrated graphics from the main Intel chip; the dearer model has an nVidia GeForce GT 750M, one step up from that fitted to the current 15-inch MacBook Pro.

Note: A new iMac may be set to launch this summer. Read about the 2015 iMac release date here.

We tested the entry-level version of the 2013 Apple iMac 21.5in, and were pleasantly surprised by just how capable the integrated graphics proved to be. Every generation of Intel Core-series graphics has shown useful improvements, and now we have a specially groomed version dubbed Intel Iris Pro. And for the first time, Intel graphics can comfortably play games.

Using our benchmart test of Batman: Arkham City, Feral Games’ OS X port of the game based on OpenGL rendering, we noted that at the game’s default settings of 1600 x 900 pixels and High detail, the smallest iMac could play at a very smooth average of 55 frames per second. As important, the minimum framerate in the benchmark sequence was still 27 fps, indicating a very playable setup with no perceptible stuttering.

A challenging test is the rather more synthetic Unigine Heaven test, and here the iMac managed a still-impressive 38 fps at 1280 x 720 and Medium detail. For context, the 15-inch MacBook Pro with Retina display, and its nVidia GTX 650M, when played at a similar quality setting allowed just 35 fps.

The step up to Intel’s Haswell generation of processors was never about ramping up raw speed though. Instead the chip giant is gradually reducing power consumption in each revision, a crucial evolution in step with the modern world’s demands for mobile computing. Consequently we weren’t expecting any particular speed boost.

In the Geekbench 3 test of processor and memory speed, this 2.7GHz iMac scored 3127 points for a single core, and 10,212 points in the multi-processor test.

Meaningless in isolation, these figures can nevertheless be compared to the result of last year’s 2.6 GHz Retina MacBook again, which scored slightly faster at 3254 and12,670 points respectively. It’s only an Intel marketing guide anyway, but that MacBook Pro had a Core i7 part inside, not Core i5.

Power consumption is incredibly low, given the potential performance available. Absolute peak consumption with screen fully bright and processors at maximum, the 21.5-inch iMac drew 85W from the mains. Sat idle with the screen at a sensible 120 cd/m2, it consumed just 26W.

At maximum brightest, the screen could deliver 365 cd/m2, more than some people would find comfortable. Its contrast ratio as measured by a checkerboard test was 540:1, which may not sound as impressive as most published specs; but this is not unusual for an IPS display whose image quality is nonetheless amazing to behold.

In out colour fidelity test, it had just 1.77 delta E, a sign of little deviation from precise colours. The full 100 percent of sRGB gamut was covered, and 74 percent NTSC and 81 percent AdobeRGB.

The other significant upgrade to this year’s iMac collection is with draft 802.11ac wireless capabilty. Using Apple’s new AirPort Extreme Base Station (6th Generation) we saw real-world transfer speeds up to 700 Mb/s, the fastest 11ac performance ever measured in the IDG UK test labs.

Apple’s biggest iMac is about more than just that much more screen space. A bigger screen can be useful for either home or professional use; the former makes entertainment more expansive when viewed from across the room while business and professional creative people may appreciate the larger working space.

The panel is identical in construction and technology to that on the 21.5in iMac, and in our lab tests gave broadly similar results. So here we saw a slightly higher contrast ratio of 560:1, and colour gamut results of 100, 76 and 80 percent for sRGB, NTSC and AdobeRGB respectively.

The extra physical chassis size of the 27-inch iMac allows Apple to fit larger 3.5in desktop-class hard disks. This allows not only much larger capacities to be offered – up to 3TB in standard or Fusion Drive configurations – but with improved disk speeds compared to laptop drives.

Again, there are options for a purely flash-based drives of 256 or 512GB, albeit at Apple’s less-than-competitive pricing; these add £160 and £400 to the baseline price.

Note that memory can be upgraded on 27-inch iMac, through a hatch on the back of the screen.

Unlike the 21.5-inch iMac, the 27-inch will always power its screen through a traditional discrete graphics processor option. These are still notebook-class mobile version, either an nVidia GeForce GT 755M for the entry model we reviewed; or 775M or even 789M for the very best that Apple now offers.

In our lab tests, the 27-inch iMac proved quite game friendly, with the kind of graphics horsepower that will also make these models good choices for creative professionals whose software can take advantage of GPGPU technology, such as Adobe Creative Suite software and Apple Final Cut Pro.

At default 1600 x 900 pixels and High detail, we saw an average of 61 fps playing the Batmark. At full-HD resolution and Medium, it managed 51 fps, while using screen-native resolution of 2560 x 1440 the iMac still allowed a very playable 42 fps, and a minimum framerate here that didn’t dip below 31 fps.

The 3.2GHz Intel Core i5 processor in this model sped it to a score of 11,261 points in Geekbench 3, or 3541 points with a single core, which again demonstrates that speed is good but not the main benefit of the new Haswell chips.

We don’t have power consumption numbers of older models to compare, but just 46W when idle and with the screen set to 120 cd/m2 is a usefully low figure. Until recently, a large display alone would be drawing that much power.

At peak performance with screen at full brightness – a searing 415 cd/m2 – this iMac still only needed 130W.