While the user interface could use some tweaking to make it more intuitive, Adobe’s Photoshop Elements 12 does have many useful photo-editing and organising tools for hobbyists who don’t want to fork out for the professional version of Photoshop. We’d suggest looking into alternatives such as iPhoto or Aperture before purchasing Elements, though, as they could offer you the features you need at a lower cost.

Adobe has updated its Photoshop Elements consumer photo-editing and organising software, which now comes in at version 12. The update brings several new features, including extra effects, frames and filters, as well as Photoshop CC’s content-aware move tool. When it comes to the Organiser, there are new tools to allow access to photos on mobile devices, too. Here’s our Photoshop Elements 12 review. 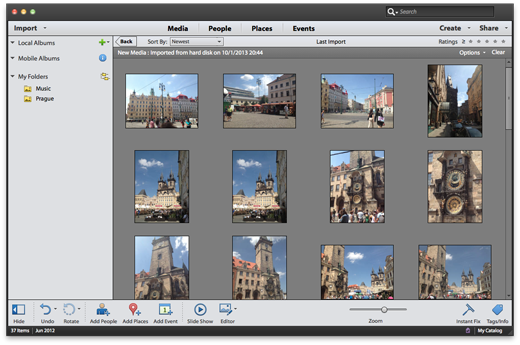 Photoshop Elements 12 Editor – the main photo-editing interface – still provides access to the tools that were present in the software previously, such as exposure, levels, colour, balance and sharpness adjustments, cropping tools, the ability to add text, teeth whitening and red-eye removal.

Among what’s new, though, are the kind of effects, textures and photo frames that have likely been inspired by the Instagram generation. With an image open in Quick Edit mode, you can click the tabs in the bottom right corner of the app to get access to these new features. Read more Photo editing software reviews. 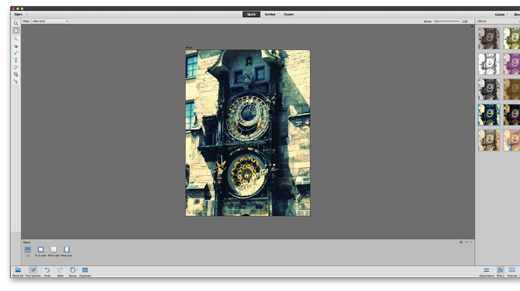 The Effects pane has ten options: if you dislike the result of an effect it can easily be undone. 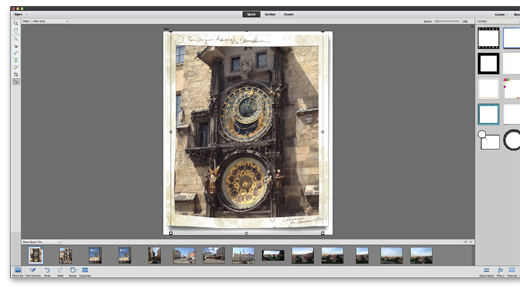 The Frames pane allows you to immediately apply one of ten styles of frame to your image.

Within effects there are ten to choose from, including popular effects such as black and white and vintage. If you’ve applied an effect that you’re not so keen on, you can press Reset Image to remove it or use the undo and redo buttons.

Ten different textures can be combined with these effects, as can the 10 frames. We felt that the range of effects, textures and frames is quite poor. We didn’t always find an effect that suited our photograph, and the frames are quite gimmicky. However, if you’re looking to make some fun, quirky images for a scrapbook, perhaps, they might be sufficient.

Moving on from Quick mode to Guided mode, there are many options to choose from here that will help you improve and enhance a photo further. Read more Creative Software reviews. 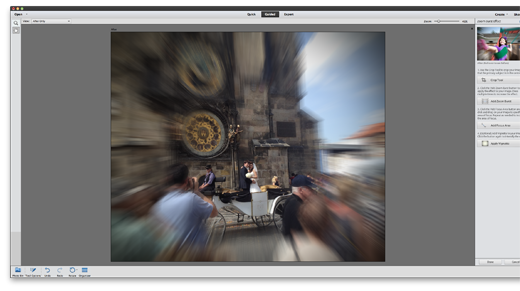 Among the new Guided Edits that Adobe has added is Zoom Burst, which is ideal for giving subjects the illusion of movement. The Guided mode means you simply follow the steps shown using the tools provided to create the desired effect, useful for anyone who has little or no photo-editing experience.

Another of the new Guided Edits is the Puzzle Effect, but we don’t particularly like this one as the results are quite gimmicky. It is easy to follow the steps and create something quite fun, though. 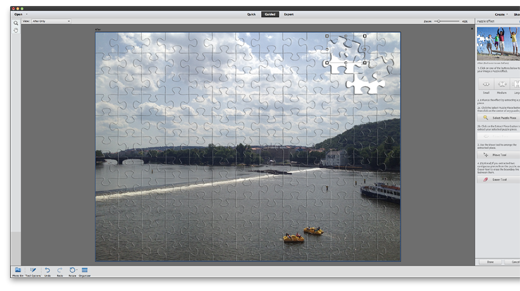 The Puzzle Effect produces quick and easy effects; with a fun end result but can be quite gimmicky.

Adobe has also added a Restore Old Photo Guided Edit, which is a little more complex than the previous two. It takes you through the entire process of restoring an old photograph, including cropping, healing, removing dust and improving the contrast and sharpness.

A new tool that Adobe has added to Elements but not the Creative Cloud version of Photoshop is the Auto Smart Tone enhance feature. By going to the Enhance tab, you can now select Auto Smart Tone, which Adobe says intelligently learns your preferences over time to adapt the results it provides.

When you select Auto Smart Tone, a window pops up with your original photograph in the middle and four different tone options around it. You can move the circle in the middle of the window towards the tone you prefer.

While intuitive and easy to use, we found this feature didn’t produce particularly great results. Many were too dark or too light and it was difficult to get a realistic tone. We did notice that, as we chose a lighter tone quite frequently, the four tone options became lighter over time – learning our preferences as Adobe said it would.

Another tool found in Photoshop Elements 12 but not in CC is Pet Eye. Pets’ eyes reflect a yellowy colour when photographed with a flash, so the Red Eye tool we use on humans doesn’t work. Adobe’s Pet Eye tool works in just the same way, but removes the yellow instead.

We found that Pet Eye worked well in our tests, and we think animal owners will find it really handy. 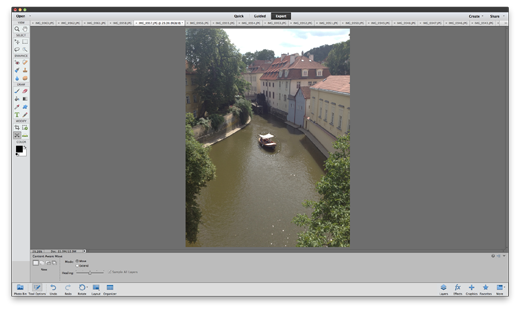 The Content-Aware Move tool provides for some impressive results.

Within the Expert mode of Photoshop Elements 12 is the new Content-Aware Move tool, which borrows some technology from its flagship sibling. We found that the tool provided quite impressive results when we tried moving a boat further down a river. Patches that didn’t look so great were easy to touch up using the clone stamp tool.

For the more serious photographers among us, there is also a new Open in Camera Raw feature. If you have a Raw file or a TIFF, JPEG or PSD that you want to edit you can go to File > Open in Camera Raw and edit your image there before continuing in Photoshop Elements 12. 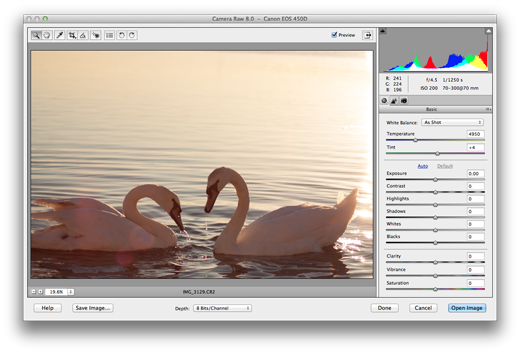 As for Photoshop Elements 12’s Organiser, Adobe has focused many of the changes on making the software mobile. Users can now access and share their photographs using the new Adobe Revel-powered Elements Mobile Albums. The Adobe Revel app, Adobe’s cloud server storage service, is free, but if you want to upload more than 50 photos per month, you’ll need to upgrade to Revel Premium, which costs £47.88 per year.

Adobe Revel works in a similar way to Apple’s iCloud or Photo Stream. You’ll be able to view photos stored in Adobe Revel through a web browser by logging in to your Revel account. They’ll also be in the Elements 12 Organiser, and in the free Revel iOS app, too.

Adobe provides one month of unlimited Revel usage to begin with. If you’re not planning on subscribing to Revel Premium when your first month is up, we’d advise you not to turn auto syncing on in the Adobe Revel app, as this means all of the photographs you take using your iOS device will automatically sync with your Photoshop Elements Organiser, some of which you might not want sync as part of your 50 photos allowance.

There are some useful editing tools within the Revel app for iOS, including cropping, red-eye removal and filters.

When it comes to sharing, Adobe has added the ability to share images (one at a time) on Twitter in both the Revel app and Photoshop Elements itself. 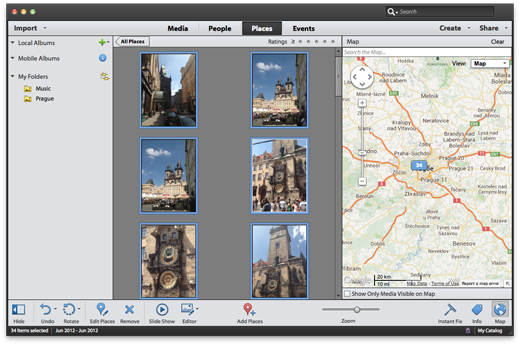 With the Places view you can select a location from a map and see only the photographs taken within that area.

Finally, the Organiser also has some new tags. You can now see Places and Event tags in the Tags/Info panel. We like the new ability to go to Places view, choose a location from the map and see only the photographs taken in that area.

Overall, the changes that Adobe has made in the new version of Photoshop Elements add some significant improvements for photographers looking to spruce up their photos. There are also new ways to access to photos while on the move, and share photos with others.

However, the user interface is not the most intuitive we’ve used, and it took us some time to get used to. If you used previous versions of the software on a regular basis, this may not be a problem, but for new users it’s tricky to get the hang of to begin with. It feels a little clumsy to use, even compared to Photoshop CC, despite it being aimed at hobbyists rather than professionals.

If you’re a loyal Photoshop Elements 12 user, it’s a worthwhile upgrade that will provide numerous new features, but for those looking for a good photo editor to enhance holiday snaps or party photos, there are cheaper and easier to use alternatives available that may be more ideal.

Apple’s iPhoto is a good and significantly cheaper photo organiser and editor for Mac users, although it doesn’t have quite so many editing options, focusing more on the photo library organisation. A step up from iPhoto is Aperture, still cheaper than Photoshop Elements 12 at £54.99.