It’s a shame that the G-RAID mini still requires mains power when using its USB 3.0 interface, as that limits its usefulness as a truly portable drive. However, it’s still light enough to carry from one location to another quite easily, and provides good performance and plenty of storage at a price that is competitive with solid-state drives.

RAID performance and reliability combined with a semi-portable design

Many people use RAID drives in their offices in order to provide better performance and reliability when backing up their important work files, but the G-RAID mini from G-Technology is one of the first portable RAID drives that we’ve come across.

Not surprisingly, the G-RAID mini is a bit larger than a conventional portable drive, as it includes two separate 7200rpm hard drives along with a cooling fan and vent located in the base of the unit. It’s not quite pocket-sized, and it weighs a full 1Kg, but it’s still small enough that you can carry it around in a backpack or briefcase without too much trouble. 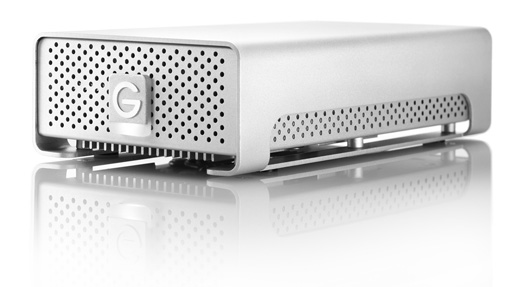 We reviewed the 2TB model, which contains two 1TB drives and costs about £350.00, but there’s also a 1TB model (2x500GB) available for £190.00. The drive comes formatted for use with Macs, and in the RAID 0 format, which provides maximum performance by ‘striping’ your data across the two drives.

It is equipped with a single USB 3.0 interface and two Firewire 800 interfaces, which means that it will work with a wide range of older and newer Mac models. There’s no Thunderbolt port, though, which is a little disappointing.

The drive isn’t quite as portable as it could be, either. If you’ve got an old MacBook with Firewire 800 then the Firewire interface can provide enough power to drive the G-RAID Mini so that you can use it in outdoor locations where there’s no mains power available.

In contrast, the USB 3.0 interface is faster than Firewire but it doesn’t provide enough power to run the G-RAID mini. This means that you’ll need to use the mains power adaptor included with the drive in order to use the USB 3.0 interface. That’s obviously a problem for a portable drive, and the G-RAID mini is really just portable in the sense that you can carry it easily from one office to another. You can only use it outdoors or on the move if you’ve got an old MacBook that still has Firewire.

Performance is good, though. The Firewire port is showing its age and could only manage data transfer speeds of about 75MB/s for both reading and writing files. But, with the benefit of RAID 0, the USB 3.0 port romps ahead with read and write speeds of 238MB/s and 200MB/s. That makes it almost as fast as some of the expensive SSD drives that we’ve seen recently – whilst, of course, also providing much higher storage capacity.

If you want to switch to RAID 1 – which provides extra reliability by making duplicate copies of your files on both drives – then you’ll need to use the RAID configuration utility that, for some reason, is hidden in the depths of G-Tech’s web site, rather than just being included with the drive itself. Just remember that making duplicate back-ups with RAID 1 cuts the total storage capacity of the drive in half, as well as reducing overall performance.