For more permanent installations, being tied to the mains should not be an issue, so providing you can stand the noise of an always-on high-speed fan the LaCie Little Big Disk can provide very high-speed storage in a rather small and dinky package.

External flash drive that shows what Thunderbolt can do

We know that Thunderbolt is the fastest desktop bus in the world right now, but there are few devices that make much use of all that potential performance. And that’s the original Thunderbolt, let alone Thunderbolt 2 which doubles bandwidth from 10 to 20 Gb/s.

The LaCie Little Big Disk was one of the first available Thunderbolt devices after the technology launched almost three years ago in February 2011, and now this miniature desktop drive has had a boost again in performance. 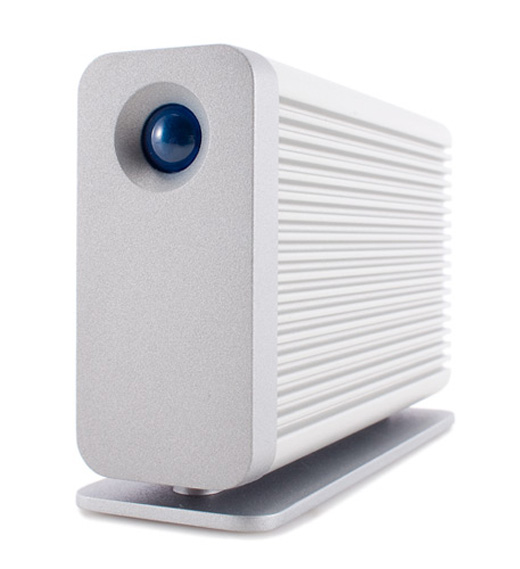 The LaCie Little Big Disk was one of the first available Thunderbolt devices after the technology launched almost three years ago in February 2011, and now this miniature desktop drive has had a boost again in performance.

LaCie’s LBD is one of few devices that can push Thunderbolt’s envelope. It’s a small external flash-based drive that goes some way to showing what Thunderbolt can achieve, thanks to a RAID 0 pair of SATA 6 Gb/s SSDs inside. In fact it goes around half way to filling Thunderbolt 1’s pipe.

The build quality and styling remain the same – a solid-feeling but compact extrusion in heavy aluminium, with stout front fascia and big blue light up front to indicate drive activity. On the back are two Thunderbolt ports to enable the unit to sit within a chain. That’s a great benefit compared to units with only one port, which effectively terminates the connection and bars the use of other devices.

The downside to being an in-line unit is that it must be self- rather than bus-powered. Hence the need for mains power from a supplied wall-wart mains adaptor, and thereby losing true on-the-road portability.

The case will act as a heatsink to help keep the unit cool, although LaCie must have found this to be insufficient alone when the drive is working hard for longer periods, so it has fitted a small-diameter cooling fan to the rear. This is sadly all too audible whenever the unit is powered up, making it rather less attractive as a drive you’d want to keep nearby on your desk. It’s a shame an intelligent controller is not fitted, which would only rev up the noise when the unit got too warm.

We saw a useful lift in speed compared to the original version we tested, which was fitted with two 240 GB SATA Revision 2 SSDs. Now taking a pair of Crucial C400 SATA 6 Gb/s SSDs, there ought to be a lot more pace available for the 1 TB LBD.

In the Blackmagic Disk Speed Test, the drive literally ticked just about every box for high-end video formats, including 12-bit uncompressed video at 2k resolution.

These are all excellent speeds, with effectively a gigabyte of data potentially writable every two seconds. However to give some context we must point out this pair of SATA solid-state drives configured in RAID 0 cannot keep up with a single solid-state drive in modern MacBooks.

As we found when testing the Apple MacBook Pro (Retina, 13-inch, Late 2013) with its PCIe-attached flash storage, we can now expect 795 MB/s read speed and a giddy 745 MB/s in sequential writes, all from a single internal SSD.